Colorado aviation associations are seeking support for an initiative that would let residents showcase their passion for aviation in a new way: a “Support Aviation” license plate.

Led by the Colorado Aviation Business Association, the associations are encouraging Colorado pilots, aircraft owners, and aviation enthusiasts to sign an online petition in support of creating the plate. Under state law, at least 3,000 signatures are necessary for legislation to be introduced to create a special license plate.

Colorado Aviation Business Association board member Chris Swathwood said the idea for the plate “just sort of popped up one day when I was driving down the road.” Swathwood said he thought of other states’ aviation license plates and the impact of aviation in Colorado and wondered why his state didn’t have one. Several states, including Idaho, Montana, Oklahoma, and Ohio, already have aviation-specific license plates.

“The economic impact by the state is really huge, and we’ve got $11.2 billion in payroll, with an economic impact of $32.2 billion a year,” he said. The design, showcased on the petition website, shows the diversity of aviation in Colorado, he said, including various types of aircraft as well as a runway to represent nonpilots in aviation.

The associations’ goal is “to raise awareness to the impact of aviation across the State of Colorado and how aviation impacts a multitude of Colorado industries,” the website explains. If the petition garners the required number of signatures, the Colorado Aviation Business Association will seek to introduce legislation creating the plates in the 2015 state legislative session. If the legislation passes, the plate would be available in January 2016. Signers of the petition would not be obligated to purchase them.

The associations plan for the plates to be $50, the standard fee for special group plates in Colorado. Swathwood said they chose not to charge an additional fee like many groups that offer special plates, but instead to have people read an economic impact statement to understand the value of aviation. “It’s really just an awareness of what aviation does in the state,” he said.

The Colorado Aviation Business Association is encouraging each adult member of families involved in aviation to sign the petition, and has set a goal of 5,000 signatures. Since state lawmakers have a limit on how many bills they may introduce, Swathwood said exceeding the minimum number of signatures will underscore its importance to constituents and make lawmakers more apt to take on the bill. 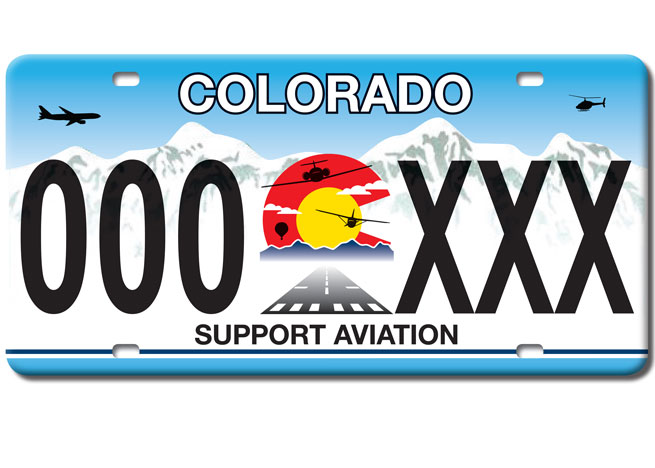