Get the app Get the app
Already a member? Please login below for an enhanced experience. Not a member? Join today
News & Media AOPA sets record straight in 'USA Today'

Editor's note: This article was updated June 26 to reflect AOPA's efforts to get 64 Gannett publications that carried part of the USA Today story to also publish a correction.

USA Today published AOPA President Mark Baker’s letter to the editor June 24, calling out errors in Thomas Frank’s “Unfit for flight” article. AOPA was limited to 175 words in its letter to the editor, making it difficult to refute the numerous inaccuracies in the reporter’s three-part article that was circulated nationwide and picked up in several other Gannett Co. publications. AOPA was denied the opportunity to submit a longer piece in the newspaper’s Op-Ed section. However, the association is requesting that USA Today and 64 Gannett publications that carried part of the story run a lengthy correction.

Baker’s letter to the editor reads: “Your investigative report ‘Unfit for flight’ presents a greatly distorted view of general aviation. The story cites 44,407 general aviation deaths in 50 years, and the claim of 'carnage' and a 'massive and growing death toll.'

“The report declines to note that more than half of those deaths happened more than 30 years ago. In fact, National Transportation Safety Board figures show that there has actually been a 75% decrease in fatalities from 1973 to today. In 2012 alone, general aviation aircraft flew nearly 25 million flight hours. General aviation—and Aircraft Owners and Pilots Association—have been aggressive in pressing the FAA to make it easier and more affordable for new technology and safety equipment to be installed in the existing fleet of general aviation aircraft. 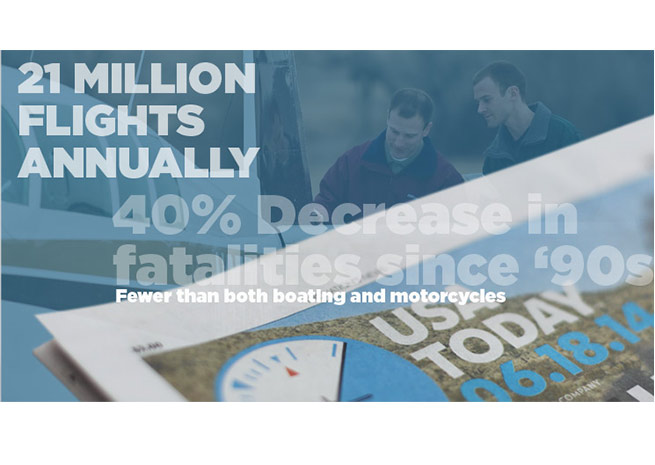 “The results can be seen in a safety record that has greatly improved over time, which your articles simply ignored. USA TODAY’s snapshots of court cases and inflammatory headlines frankly do nothing to improve aviation safety. They only distort the true picture.”

In its request for a correction, AOPA specifically called out the article’s assertion that general aviation had a “massive and growing death toll.” AOPA said that the USA Today reporter himself had provided the association with a link to NTSB accident data that shows that the number of GA fatalities has declined. The association pushed the point further, saying, “In fact, fatalities in general aviation have declined by 75 percent since 1973, according to the 1975 Statistical Abstract of the United States and NTSB. The stories cite 44,701 general aviation deaths in 50 years, but fail to note that more than half of those deaths happened more than 30 years ago. What’s more, our own Air Safety Institute (ASI)’s accounting of accidents based on NTSB reports shows that the number of fatalities dropped to 347 in 2013, the lowest figure in decades.”

AOPA explained that the NTSB has not yet released its final tally for 2013, but so far the numbers indicate that there were 1,223 accidents, and 205 fatal accidents with the 347 fatalities. By contrast, there were 4,251 accidents in 1973, of which 722 were fatal with 1,411 individual fatalities.

“Since the stories’ premise seems to be that there is a, “massive and growing death toll,” and since statistics do not support that claim, we would request a correction that reports the contradiction between the stories’ claims and the actual declining number of fatalities over the 50 years cited, and especially the sharper decline over the past two decades.”

Since the USA Today story ran June 18, AOPA members and aviation organizations have been working to set the record straight. In addition to informing the pilot community, AOPA is aggressively working to educate the public, and will continue to work on the issue.

AOPA has also reached out to the 64 Gannett publications that ran parts of the USA Today story, officially requesting that they run corrections. Some of the editors of those local publications have said they will run AOPA’s letter to the editor that appeared in USA Today. AOPA members can help set the record straight if their local newspapers or television stations ran part of the USA Today story by also writing a letter to the editor of those publications. Members are encouraged to use the factual talking points that AOPA raised with USA Today.