South Carolina pilot sets the bar (not too high)

On June 21, with scattered clouds overhead and a crowd gathered on and around Greenville Downtown Airport in Greenville, S.C., Gary Davis launched in a near-silent pursuit of a world record. Flying an ultralight trike, a custom combination of a North Wing Stratus wing matched to an electric-powered trike frame designed by Randall Fishman, Davis aimed for glory just a few thousand feet above.

It would not take much: No one had yet attempted an altitude record in this particular aircraft configuration, so getting off the ground would do the job. Davis, however, had higher aspirations than that—at least 3,281 feet (1,000 meters). 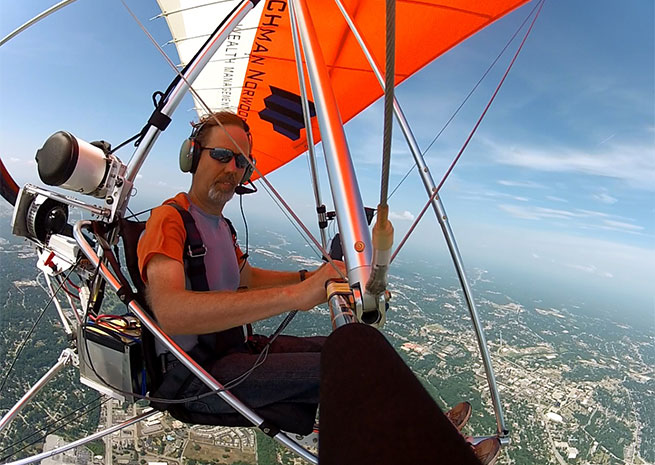 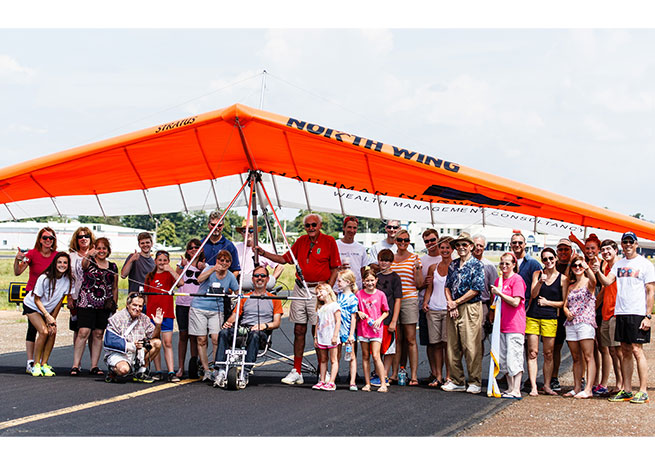 “I would have been ashamed if I hadn’t reached that goal,” Davis said with a slight chuckle in a telephone interview following his flight.

Davis, carrying a radio to talk to ATC and wearing a headset instead of a helmet (he typically does not operate in controlled airspace), topped his personal minimum goal by more than 1,000 feet, but left some room for others to top him in the not-too-distant future. That was the point.

“I’m looking forward to people pushing the technology to where we go further, faster, and higher with electric,” Davis said. “The technology is going to be all about the batteries. That’s the key.”

Davis, 56, is a partner in a Greenville investment management firm, and has put his belief in sustainable energy to work at the office as well has his home. The company has built a 25-kilowatt solar panel system that reduces their net energy consumption from the grid, and will pay for itself with a combination of savings and tax incentives. Davis and his wife, Deborah Meadows, both drive electric cars. Davis said that solving the technical challenges of electric aviation through innovation will, in turn, propel advances in electric automobiles.

On June 21, with an official observer from the National Aeronautic Association looking on (and a sophisticated altimeter and GPS recorder strapped to the trike), Davis launched and began a slow climb toward his own spot in aviation history. Conditions were good if not quite ideal, with a surface temperature around 93 degrees, calm winds, and scattered clouds about 3,200 feet above.

On the ground, a crowd had gathered at the airport restaurant, and in an adjacent park and playground. Davis would later learn that the mayor was among those on hand to watch. A local television station would use footage from a GoPro strapped to Davis' trike to document the feat.

“They had a lot of people come out,” Davis said. “It was fun, it was like a carnival. It became a deal.”

A 20 horsepower DC motor that weighs just nine pounds turned the propeller in near silence, drawing power from a 47-pound battery that Fishman, a designer and producer of light electric aircraft since 2005, had built by painstakingly hand-soldering more than 2,000 lithium ion cells. Davis circled higher, ever higher… well, a little higher, using thermals as much as possible to help get him above the level of surrounding scattered clouds.

“I flew it until the batteries were exhausted … and then I glided,” Davis recalled of his half-hour flight into the record books.

NAA staff said it will take roughly 60 days to verify the data captured by the sensitive barometric pressure recorder on board, and calibrate it with readings taken at ground level to confirm a maximum altitude of roughly 4,660 feet. Once the national record is established, it will be forwarded to the Fédération Aéronautique Internationale for ratification as a world record, a process likely to require months more. Davis thought he might have topped 4,700 feet msl, though regardless of the final number, “I’ve got the record because nobody had tried it before.”

The longtime ultralight and hang glider pilot has already thought of ways he can best his own mark: a more efficient propeller that operates at lower rpm, coupled with a gear reduction system, for one thing (Davis had a few pounds to spare before reaching the limit for this particular record attempt). Better weather conditions might also help, and Davis said that with sponsorship, he could envision building a carbon fiber version that leaves more useful load for batteries.

“Somebody else could do that and go higher,” Davis said. “That’s what it’s all about. The only way you improve things is buy pushing the envelope.”

In this case, it won’t take much of a push. Davis might even take a shot at his own record.

“I’d have to see if Randall would loan me a bigger battery,” Davis said.