Get the app Get the app
Already a member? Please login below for an enhanced experience. Not a member? Join today
News & Media Inhofe seeks to expand Pilot’s Bill of Rights

Sen. James Inhofe (R-Okla.) is turning to the general aviation community for feedback on expanding the existing Pilot’s Bill of Rights. On June 30, Inhofe launched a website detailing what he is calling the Pilot’s Bill of Rights 2. The draft indicates that the bill would limit Customs and Border Protection’s authority to stop and search GA aircraft and require the FAA to act on third class medical certification reform within 180 days of the bill becoming law.

“We can once again thank Senator Inhofe for bringing key general aviation issues before Congress,” said AOPA President Mark Baker. “This new version of the very popular Pilot’s Bill of Rights comes at a time when the GA industry is actively engaged in actions aimed at protecting pilots’ civil liberties and freedom to fly.”

“The Pilot's Bill of Rights 2 will continue and expand on the improvements that were accomplished just two years ago with the original Pilot's Bill of Rights,” Inhofe said. “Input from the aviation community is essential to addressing the needs of aviators and industry alike. I look forward to working closely with stakeholders to develop a final product and ensure this vital piece of legislation makes necessary reforms, cuts red tape and is signed into law.”

An outline of the draft bill says that it would prohibit CBP from searching any GA airplane or requesting pilots’ airman or medical certificates (and any other license) if the aircraft or pilot was traveling between two points within the 48 contiguous states without having “articulable reasonable suspicion of illegal activity” or “probable cause that illegal activity is occurring.” An exception is included for any officer under the Department of Homeland Security, including CBP, in the case of responding to an accident. It also clearly states three types of flight activity that do not qualify as “articulable reasonable suspicion of illegal activities”: Flying without a VFR or IFR flight plan, flying at fringe airports, or a flight path that is not straight between two points.

Mirroring the language in the House and Senate General Aviation Pilot Protection Act, the draft Pilot’s Bill of Rights 2 would allow pilots to be exempt from the third class medical certification process if they fly  noncommercial VFR flights in aircraft weighing up to 6,000 pounds with no more than six seats. Pilots could carry up to five passengers, fly at altitudes below 14,000 feet msl, and fly no faster than 250 knots. The FAA would be required to report on the safety consequences of the new rule after five years.

The draft also includes provisions to expedite updates to the notam program; limit the liability of aviation medical examiners, designated pilot examiners, and designated airworthiness representatives; and make local airport authorities “the sole authority” on the use of privately built and owned hangars at airports that received federal funds. A placeholder has been left in the draft regarding how to best add safety-enhancing equipment to the existing fleet of GA airplanes.

It further defines the applicability of Freedom of Information Act requests to contract towers and other FAA contractors, and includes several updates to expand the original Pilot’s Bill of Rights.

The first bill, signed into law Aug. 3, 2012, required fair treatment of pilots in FAA enforcement cases and NTSB reviews, streamlined the notam program, and required a review from the Government Accountability Office of the FAA’s medical certification process. The goal of the review was to reduce the number of instances in which pilots misinterpreted the medical application form.

Pilots can learn more about the Pilot’s Bill of Rights 2 and offer suggestions through Inhofe’s website.

Inhofe will be hosting a listening session at EAA AirVenture in Oshkosh, Wis., to gather that feedback. AOPA will provide more details as information about that session is released. In a guest column in the July issue of AOPA Pilot, Inhofe describes the bill and asks for feedback as well. 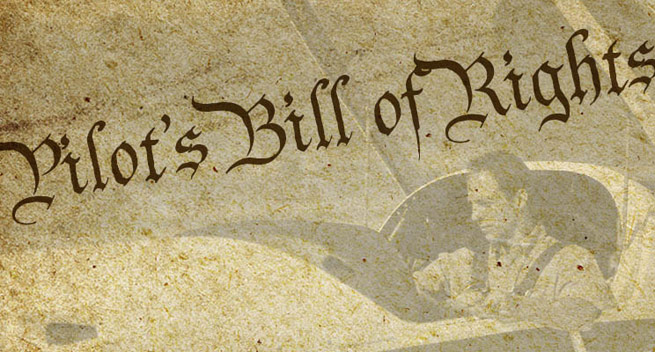