Get the app Get the app
AOPA will be closed July 4th, in observance of the Independence Day holiday. We will reopen at 8:30 am ET on Tuesday, July 5.
News & Media An airport thanks its users, including GA

An airport thanks its users, including GA

When Louisiana’s Lafayette Regional Airport wanted to express its gratitude to the community for record-breaking passenger volume, it created a rewards program to inject some fun into air travel. Now, the airport’s general aviation population also gets to play.

Lafayette Regional Airport is located in the urban center of the eight-parish Acadiana region of Louisiana, where the art, music, food, and communities of Cajun and Creole cultures thrive and are celebrated. Lafayette also prides itself on being "one of the nation’s most wired communities."  The airport competes for aviation business with nearby airports in Baton Rouge and Lake Charles. Lafayette Regional serves about 400,000 travelers each year, "and that number continues to grow," says the airport’s website.

Since March 2011, local merchants and businesses have helped sponsor the newly rewired Fly Lafayette Club, a program that features monthly drawings for gifts including meals, services, merchandise, gift certificates, airline and museum tickets, and airport parking. Program participants become eligible for the prizes by swiping their membership card at kiosks located inside the secure area of the airport.

At first there was no way for general aviation to participate, because of the location of the kiosks. Was there a way to change that?

Yasmina Platt, AOPA Central/Southwest regional manager, posed that question to airport management and its marketing firm, Sides and Associates, of Lafayette. She noted that AOPA's experience through its Airport Support Network volunteers across the country showed that incentive programs are valuable to pilots and the businesses and airports involved.

"Increased exposure and opportunities usually means increased business and flying," she said. Other types of incentive programs AOPA has heard about include discounts or discount cards for nearby restaurants, services, and shops, or discounted fuel for based tenants. 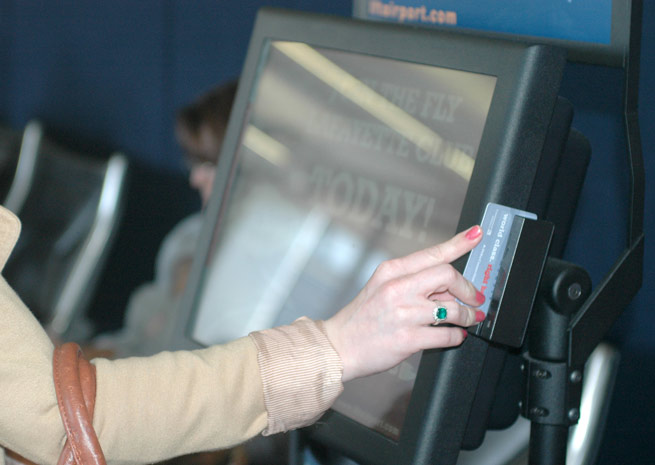 The answer to her inquiry about including general aviation came back: "Yes." As of March 17, general aviation pilots and passengers are able to join the fun by swiping their cards at a kiosk installed at fixed-base operator Landmark Aviation. (You will find the kiosk in a conference room for now; as soon as its signage is complete, it will be moved to Landmark’s lobby.)

"She called at a good time," said Robert Callahan, a Sides and Associates media relations and creative services official. At the time of Platt’s inquiry, Sides and Associates had been overhauling and expanding an earlier, low-tech iteration of the program, a task that required starting from scratch—even having to write software to run the kiosks.

In 2011, the program had re-emerged with kiosks and online registration, and ever since has grown to include 6,200 members, including 55 new members who joined in March 2014.

As of March 26, there were 574 entries for the April 1 drawing for 100 prizes that include "a lot of neat stuff" from logo items and symphony tickets to "blankets like the airlines don’t give you for flights anymore," Callahan said. Entries during high-passenger-volume December numbered 800.

The airport has broken its record for passenger traffic each of the last five years, and the Fly Lafayette program is its way of saying thank you, Callahan said. Its success has brought the marketing firm national attention—and a steady stream of inquiries from other airports.

"General aviation is often overlooked as airports grow," he said. "Including GA passengers and pilots in the Fly Lafayette Club allows all users of our airport to participate in the benefits of flying out of Lafayette."

Dan Namowitz has been writing for AOPA in a variety of capacities since 1991. He has been a flight instructor since 1990 and is a 35-year AOPA member.
Go to Dan Namowitz's Profile
Topics: Airport, Airport Advocacy, Advocacy