An auspicious month for quiet aircraft

Solar Flight announced the first test flights of its newest aircraft, Sunseeker Duo, a two-seater powered by the sun. (The April 22 announcement lagged behind the actuality: Eric Raymond, who has been working on solar aircraft for 25 years with his wife, Irena Raymond, launched from Italy on Dec. 17, marking the anniversary of the first powered flight in Kill Devil Hills, N.C., with a short excursion over Voghera, Italy.) 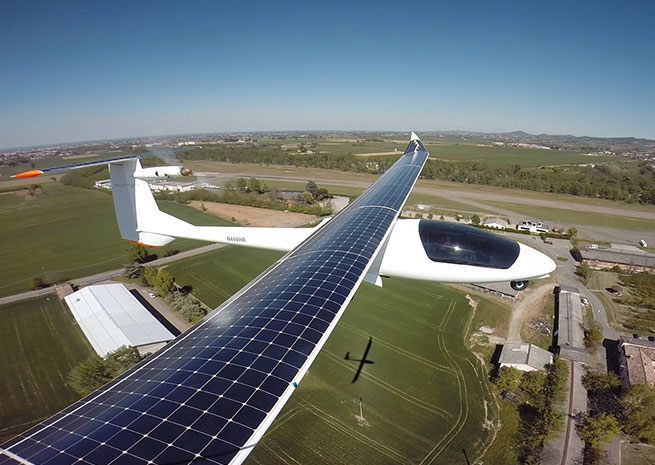 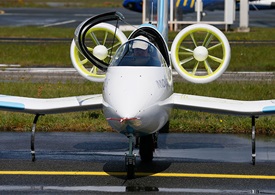 In Bordeaux, France, Airbus Group (the new name for Airbus parent EADS, pending final approval of the change) chose an April 25 event to announce its own electric flight test program to the public. The E-Fan has motors, two seats, and runs entirely on batteries, testing concepts that will pave the way for short-haul airliners able to run on swappable batteries that can be changed out at the gate in about as much time as it takes to unload luggage. Advanced materials and systems also power Solar Impulse 2, unveiled April 9 and successor to the Solar Impulse, which captured attention on a high-profile mission across the United States in 2013.

Engineers, materials scientists, and designers gathered April 25 and 26 in Santa Rosa, Calif., for the CAFE Electric Aircraft Symposium, the eighth annual edition of a conference that began with lofty goals but modest attendance—only about “15 of us,” recalled CAFE Foundation President Brien Seeley, a pilot and eye surgeon, and one of the chief proponents in “the movement,” as he called it in a telephone interview.

“Now, it’s over 10 times that big,” Seeley continued, ticking off a list of who’s who in aircraft manufacturing and research. “Every major player was in attendance.”

Seeley said conference presentations covered the scope of both applied and emerging technologies, including nanotechnology that has allowed researchers to develop remarkably efficient motors. Batteries, long a key limiting factor in electric aircraft propulsion, have also advanced, with systems now visible on the horizon that promise to power significant payloads of people and goods across distances up to 500 miles on a single charge. Seeley said a preponderance of aviation missions fit within that range limitation, and major corporations, government agencies such as NASA, and small firms are all contributing to a confluence of ideas and concepts.

“One thing lacking,” Seeley said, is “central guidance on where this is all headed. ... We’re going to need some standards for how quiet they have to be.”

Seeley’s organization, long a proponent of such standards, hopes to replicate its 2011 Green Flight Challenge in the near future, leveraging another cash prize (or prizes) to stimulate a fresh wave of development. Seeley said the CAFE Foundation founders did not imagine that electric aircraft would fly so far, so soon.

“It’s been fortuitous to be riding this tsunami,” Seeley said. As for the Santa Rosa event, “This was just an Academy Awards of the electric airplane. Every person that got up at the podium was a rock star.”

For now, the endurance limit remains around an hour for various light aircraft designs currently flying on battery power. Sunseeker Duo can cruise up to 12 hours with two people on board, the Raymonds announced, relying on a combination of 1,510 solar cells and batteries that boast 23-percent efficiency for power.

“The lithium batteries today have seven times more capacity than the nickel cadmium batteries we used in Sunseeker I.,” Eric Raymond said in a press release. “When we first sketched the concept for this airplane, we couldn’t imagine solar cells with greater than 20 percent efficiency. These technologies are a dream come true.”

More details of the CAFE Foundation symposium are being posted on the foundation’s blog, highlighting individual presentations at the conference.