Get the app Get the app
AOPA will be closed July 4th, in observance of the Independence Day holiday. We will reopen at 8:30 am ET on Tuesday, July 5.
News & Media Key issues moving forward, Baker tells Alaska pilots

Critical issues for general aviation pilots in 2014 are moving forward on several fronts, making it more important than ever for pilots to stay involved, urge lapsed pilots to return to their cockpits, and support the work of the ever-stronger GA coalition in the U.S. House and Senate, said AOPA President Mark Baker in a visit to Alaska. 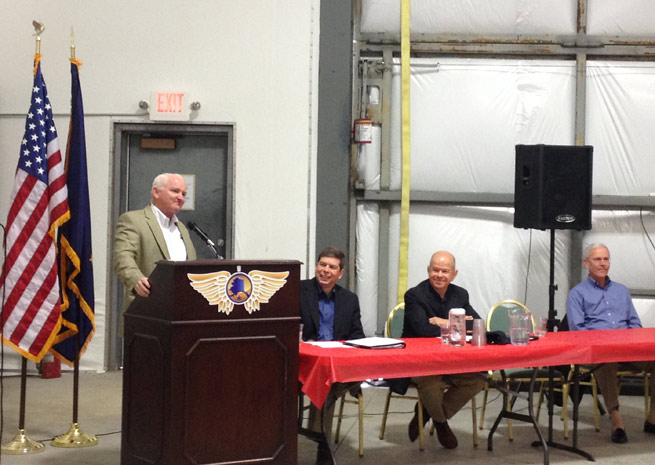 Making the keynote address to the Alaska Airmen’s Association’s Great Alaska Aviation Gathering in Anchorage, Baker thanked Begich for his active role in the 40-member Senate GA Caucus, crediting both Begich and Sen. Lisa Murkowski (R-Alaska) with being among the Senate sponsors of the General Aviation Pilot Protection Act. The measure would make it possible for private pilots to fly aircraft weighing up to 6,000 pounds, with six or fewer seats, on the basis of driver’s license medical self-certification. The House GA Caucus now numbers 239 members.

In another development on the medical certification front, Baker explained that two years after AOPA and the Experimental Aircraft Association first presented the FAA with a petition asking the FAA to expand the driver’s license medical standard, the agency in April responded with a plan to initiate a "rulemaking project." However, AOPA continues to press the issue on all fronts, and is bringing its life-sized petition to fly-ins and other events to give pilots a chance to sign on.

The rash of tense encounters between GA pilots and agents of Customs and Border Protection—including aircraft searches conducted by the agency without probable cause—have been a hot-button issue in the aviation community. On April 30, Baker took general aviation’s concerns straight to the top in a meeting with agency’s new chief, R. Gil Kerlikowske, who assured AOPA that the agency is revisiting its handling of such situations. AOPA will continue to monitor the agency’s response to pilots’ concerns, Baker told the pilots.

Getting action on key issues is most effective if the pilot community is strong and engaged. Baker briefed the Alaska aviators on AOPA’s robust initiatives to strengthen the pilot community including the new Rusty Pilot program, designed to offer lapsed aviators a path back to flying. He also summarized the association’s efforts to promote and strengthen flying clubs, which for many are the path to becoming a pilot, and remain the most affordable access to flying. In March, the new AOPA’s Guide to Starting a Flying Club was released.

Movement toward third class medical reform is not the only news for pilots on the medical front: The FAA has submitted to medical experts for review its proposed guidelines for dealing with cases of sleep apnea in pilots. The action was a scaling back of a previous, controversial agency introduction of a requirement for expensive—and intrusive—testing of some pilots applying for medical certificates. AOPA and others had objected to the testing requirement.

Issues unique to Alaska were also at the forefront of Baker’s visit. George, a Cessna 185 pilot, followed up Baker’s keynote address with a briefing on a safety issue: a project to realign common traffic advisory frequencies in the busy Mat-Su Valley effective May 29, in an effort to reduce collision hazards in the area.

During a GA Caucus listening session with Begich, George gave a presentation on the need to increase the availability of weather reporting facilities—a critical safety function in many of the state’s remote but well-traveled air routes. He and Adam White of the Alaska Airmen’s Association also discussed ways to improve the joint civilian and military use of shared airspace in Alaska, a state with numerous parcels of special-use airspace that often create a complex mix of air traffic.

At Merrill Field, Baker attended a meeting of the airport commission. The airport is located in the complex and often congested Anchorage area airspace, with military and other civil airports in close proximity.

He also visited the Anchorage Air Route Traffic Control Center to discuss the state of Automatic Dependent Surveillance-Broadcast (ADS-B) in Alaska with FAA representatives. Alaska pilots were participants in ADS-B development through the Capstone Project, an early demonstration of the technology that produce a national standard, but also left some Alaska aircraft in need of equipment upgrades.

Dan Namowitz has been writing for AOPA in a variety of capacities since 1991. He has been a flight instructor since 1990 and is a 35-year AOPA member.
Go to Dan Namowitz's Profile
Topics: Advocacy, Avionics, Alaska