Get the app Get the app
AOPA will be closing at 2:30pm ET Wednesday, November 23rd, and will remain closed Thursday and Friday in observance of the Thanksgiving holiday. We will reopen Monday November 28th at 8:30am ET.
AOPA Members DO more LEARN more SAVE more - Get MORE out of being a pilot - CLICK HERE
News & Media Washington pilots support AOPA third class medical bill 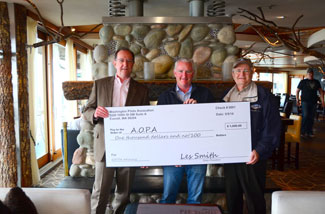 Posner and Washington Pilots Association Legislative Director Dr. Blake McKinley spearheaded their organization’s contribution, noting that many in their organization feel that third class medical reform is one of the most significant steps that could be taken to protect and expand GA. The Washington Pilots Association's contribution is a recognition of how important this initiative is to Washington state’s pilots, and how appreciative the association is of AOPA’s efforts to protect and grow GA.

State organizations like the Washington Pilots Association are smaller than national organizations, so it wanted to leverage national advocacy efforts like the General Aviation Pilot Protection Act and get the biggest bang for the buck, said Posner. “We want to make sure that this helps not only pilots in our state but for GA in general, which is a win-win for everyone,” he said. “The third class medical bill has the potential effect of getting a ton of people back in the air and it’s good for everyone, including flight schools, manufacturers, and airports.”

The Washington Pilots Association's donation is a great example of local pilots engaging on critical issues, and working with AOPA to support initiatives that are beneficial to general aviation, said AOPA Northwest Mountain Regional Manager David Ulane. “AOPA and the Washington Pilots Association have an excellent collaborative relationship on local, state, and federal GA issues, and all members should continue to reach out to their federal elected officials, and encourage them to support the General Aviation Pilot Protection Act.”