Southern California-based Icon Aircraft announced May 14 that it will relocate to a 140,000-square-foot facility in the city of Vacaville, about 50 miles northeast of San Francisco.

Icon Founder and CEO Kirk Hawkins said in an op ed released by the company that Icon will consolidate design, manufacturing, sales, flight training, and corporate headquarters at the new location, which is adjacent to Nut Tree Airport. Icon's Los Angeles headquarters currently houses corporate functions, while engineering and production functions are in Tehachapi, Calif.

Hawkins said Icon decided on Vacaville after a nationwide search “because of the business-friendly local government, accessibility to a vibrant, talented labor pool, existing facilities adjacent to the airport, and the region’s outstanding weather and environment for year-round flight operations and training,” in addition to its access to recreational destinations. The company cited a study that estimated that Icon's annual economic impact on Vacaville and Solano County at more than $350 million once the company is at full production rates.

Hawkins said the Icon A5 amphibious light sport aircraft has been in rigorous development at the company’s Southern California facilities for the last several years, and reported that Icon has received more than 1,000 pre-orders for the A5. The company said in a news release that the first customer aircraft is scheduled to be completed in early 2015.

Icon was founded in 2006 in Silicon Valley and has positioned its carbon-fiber A5 as a recreational aircraft for nonpilots as well as current pilots. In 2013, the FAA granted the A5 an exemption from the 1,430-pound weight limit for amphibious LSAs to incorporate a spin-resistant design. 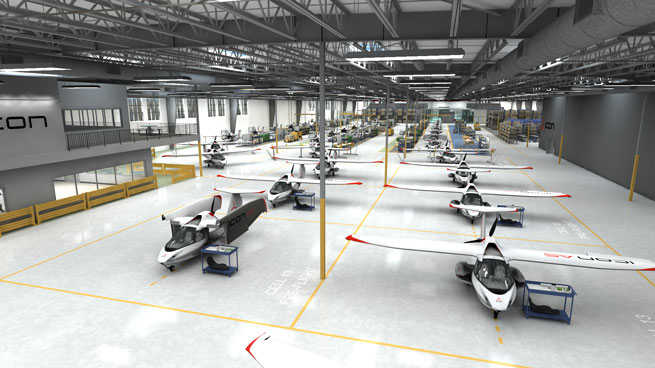