Get the app Get the app
Already a member? Please login below for an enhanced experience. Not a member? Join today
News & Media Debonair to debut new paint scheme at Indy

AOPA’s Sweepstakes Debonair will be sporting its new paint scheme May 31 at the Indianapolis Regional Fly-In—its first public appearance since replacing the temporary fun-facts decals with sleek stripes. The airplane came out of the paint shop May 12, just in time for the Midwest event.

The Debonair will be competing for looks on the ramp at Indianapolis Regional Airport, with a lineup of rare and classic warbirds scheduled for display.

Allyn Beaver with the World Wars Aircraft Museum based at the airport will have its hangar open for attendees to peruse an eclectic collection of aircraft, including Lucky Lady, an experimental 600-horsepower, seven-eighths scale P-51 Mustang; a Navion and a rare twin Navion that is currently being refurbished; two Nanchang CJ6As; a Vagabond PA-15; and a Citabria. 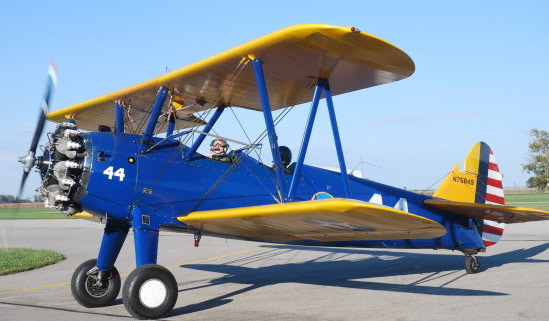 Beaver and others with the museum have been working on restoring the twin Navion for the past eight years, “and we’re probably that far from being done with it,” he said. “Pretty much everything will be restored, that’s what is taking us so long.” Temco took the single-engine Navion and put two 150-hp engines on it to create the twin. The aircraft is “well underpowered” Beaver said, adding that “it’s not fast” for a twin with a 140-knot cruise speed.

The American Military Heritage Foundation, also based at Indianapolis Regional, will have its Lockheed PV-2 Harpoon on display and open for ground tours. The twin-tail often makes spectators think it is a variant of the North American B-25 Mitchell. American Military Heritage Foundation member Gaylon Piercy said he likes to joke with spectators and “call it B-25T” for tailwheel. However, the tailwheel should be a giveaway that it’s the Harpoon.

Friends of Jenny will be bringing a replica of the Curtiss JN-4 Jenny biplane, an icon of the early aviation era that is known as a barnstormer, a World War I flight trainer, and an air mail plane. Also slated to be on display are David Rothenanger’s Beech T-34B and aircraft from the Trojan Horsemen Flight Demonstration Team.

Some of the display aircraft also will be offering rides, including the Experimental Aircraft Association’s B-17 Flying fortress Aluminum Overcast, Grayout Aerosports’ Pitts S2C, and three Commemorative Air Force warbirds.

EAA will be selling rides in the B-17 May 30 to June 1. For EAA members, tickets cost $409 in advance or $435 at the door; for nonmembers, it costs $449 in advance and $475 for walk ups. The flight experiences last about one hour, with 24 minutes of that being in the air, according to EAA. Grayout Aerosports will offer 15- to 20-minute flights for $225 during the fly-in, but also will provide flight training to anyone interested the week leading up to the event.

The Commemorative Air Force’s Indiana Wing will have a Fairchild PT-26 Cornell, Consolidated Vultee BT-13 Valiant, and Boeing PT-17 Stearman Kaydet on display and available for rides, which can be purchased in advance. (These and other Commemorative Air Force aircraft also will be on display the week after AOPA’s Fly-In for the second annual Warbird Expo at Indianapolis Metropolitan Airport.)

Don’t miss out on AOPA’s Fly-In May 31 at Indianapolis Regional Airport. In addition to a robust aircraft display, AOPA will be offering educational seminars, dozens of exhibits, a free lunch to members and their immediate family, a $5 pancake breakfast, and a Pilot Town Hall with AOPA President Mark Baker, U.S. Sen. Joe Donnelly, U.S. Reps. Larry Bucshon and Todd Rokita, and Indiana State Sen. Brandt Hershman.

RSVP to let AOPA know you are coming. AOPA members can reserve free lunch tickets for themselves and their immediate family members.

If you wil be flying in, download and review the flight procedures in advance. Check the weather and file a flight plan with DTC DUAT, the official weather sponsor of AOPA’s Regional Fly-Ins. If you need a rental car, book it through AOPA for exclusive discounts from Enterprise, National, and Alamo.