Get the app Get the app
AOPA will be closed July 4th, in observance of the Independence Day holiday. We will reopen at 8:30 am ET on Tuesday, July 5.
News & Media Colorado mandates tower marking 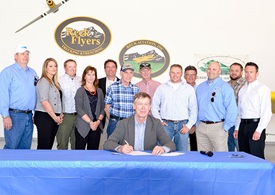 Colorado has joined the growing list of states taking action to protect pilots—particularly those whose mission requires low-level flying—from threats that can be hard to spot: towers, including meteorological evaluation towers, that stand more than 50 feet tall but less than the 200-foot height at which current FAA regulations require marking.

Gov. John Hickenlooper signed the law May 17 at Reck Aviation, an aerial application business. AOPA worked with operators and organizations including the Colorado Agricultural Aviation Association to educate lawmakers about the lethal threat posed by unseen towers—an area of concern shared by the NTSB—and shepherd the bill through the legislative process.

AOPA voiced support for the bill as it made its way through committees, and continued to press for passage in the state Senate leading up to a final legislative vote that was nearly unanimous (only one senator voted against the measure).

AOPA continues to work around the country with states considering similar measures in the absence of federal requirements to mark or illuminate towers that put aerial applicators, emergency medical responders, and other aviators who fly low-level missions at risk.