The sleek, efficient Mooney 201 was the runaway winner of the AOPA Aircraft Personality Quiz, where it continues to dominate the competition.

Of more than 38,000 completed online quizzes, nearly 10,000 respondents got the Mooney. The sporty Texas-built, four-seater finished far ahead of the runner up, the Beechcraft G36 Bonanza, which turned out to be the ideal airplane for about 4,000 respondents. 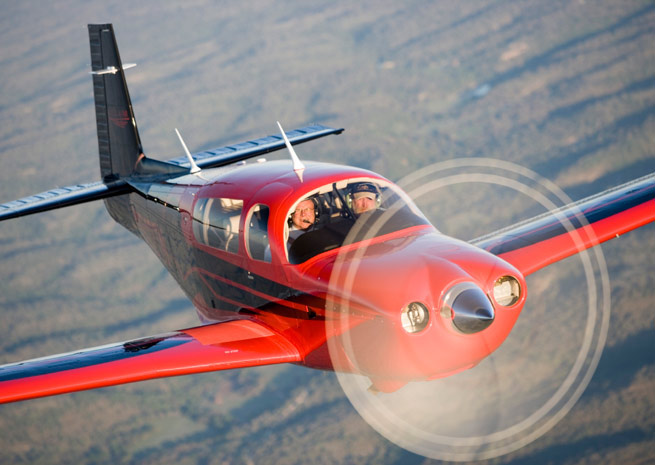 “You can trace the Mooney’s popularity to the fact that so few pilots are willing to splurge on a $50 bottle of wine,” said AOPA Pilot Senior Editor Dave Hirschman, who helped create the quiz that asks 14 seemingly unrelated, personality-based questions. “If you want to travel far and fast, don’t care too much about the latest electronics, want to cut your fuel consumption, and don’t buy expensive wine—you get a Mooney. In fact, that’s the result I got when I took the quiz.”

A similar set of answers—except for the expensive bottle of wine—gets you a Bonanza.

The quiz also shows that, if given a choice, most respondents would choose to fly in the 1950s through 1970s when avgas was relatively inexpensive, the pilot population was growing, and new general aviation aircraft were being built in larger numbers. The modern era with glass panels and airframe parachutes, and the pre-World War II “Golden Age,” also were quiz options.

Some of history’s most iconic airplanes drew relatively low numbers in the quiz with the legendary P-51 Mustang going to 650 respondents, the Douglas DC-3 to 384, and the Beech 18 to 672.

“That has mostly to do with their fuel consumption,” Hirschman said. “If you want to manipulate the quiz so that you get a Mustang, you’ve got to be willing to buy the expensive bottle of wine, like roller coasters and fast cars, and not care at all about how much fuel you burn.”

Among AOPA staff members, the Mooney 201 was the most popular—but not everyone got the same result. AOPA President Mark Baker was meant to fly a Globe Swift, and AOPA Editor in Chief Tom Haines should be in a Piper Meridian.

What airplane were you meant to fly?

Of all the pioneering general aviation aircraft ever produced, which model are you meant to fly? The AOPA Aircraft Personality Quiz matches you with the perfect aircraft for your style, temperament, and aviation ambitions. If you haven't already, take the quiz to find out which one best suits you.