Get the app Get the app
AOPA Members DO more LEARN more SAVE more - Get MORE out of being a pilot - CLICK HERE
News & Media Op-Ed: Helping General Aviation Take Off

General Aviation is a homegrown American industry that is responsible for 1.2 million jobs and pumps more than $150 billion into our nation’s economy. But it’s also an industry that could do much more to create jobs, boost our economy, and contribute to our national transportation system. Instead, General Aviation is being held back by an antiquated regulatory system that is painfully unresponsive and out of touch. 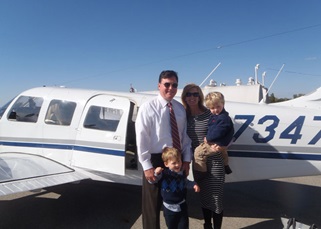 Outdated FAA regulations have contributed to a dramatic reduction in the number of aviators, and a corresponding increase in the cost of flying. Furthermore, the costs that prevent aviators from flying have led to a dramatic drop in the number of aircraft being produced. The General Aviation Manufacturers Association (GAMA) reports that that production of single-engine planes plunged from 14,000 in 1977 to fewer than 700 in 2010—and that’s a drop that translates to thousands of lost jobs. Those jobs have been lost, in large part, because of a bureaucracy that rarely serves the public, whatever the intention. We have already taken action and scored a win in providing relief to general aviation when Representative Mike Pompeo’s “Small Airplane Revitalization Act,” a bill I coauthored and helped to lead passage of in 2013.

Our latest effort to spur growth and protect the general aviation industry is to expand the Third Class Medical light sport exemption to general aviation. It is one example of an old, well-intended rule that needs to be updated. In short, the Third Class Medical forces aviators to repeatedly undergo expensive and inconvenient medical exams that produce no meaningful assessment of an aviator’s fitness to fly. In fact, if the examining physician finds a potential concern, the aviator’s fitness to fly is determined not by his or her own doctor, but by an unknown bureaucrat in Oklahoma City—a bureaucrat who never meets or personally examines the aviator.

In 2011, the most recent year for which we have complete statistics, only 218 aviators were issued final denials after they provided all information requested by the FAA, while more than 100,000 aviators were medically cleared to fly.

The truth is that no medical exam conducted every few years can determine whether a pilot is healthy enough to fly right now. Only the aviator can do that—and that’s exactly what aviators do every time they approach the flight deck. So why are we forcing them to jump through hoops that discourage thousands of people from flying while contributing nothing to safety?

The performance and cognitive skills of these aviators would still be evaluated every two years during the required flight review by a flight instructor, they simply would no longer have to submit to a medical exam from a doctor who knows little or nothing about them or their health. And these aviators would still be required to assess their own fitness to fly, just as they are today.

The truth is that medical-related aviation accidents are incredibly rare.

That’s why Sam Graves and I, along with many leaders in the General Aviation Caucus, introduced the General Aviation Pilot Protection Act (GAPPA) to expand the already-successful light sport aviator medical standard to apply to general aviators that fly for recreation or private transportation. This legislation will encourage general aviation growth, create jobs, and promote safety. Under the leadership of Senator John Boozman from Arkansas, the Senate recently introduced identical legislation.

Instead of spending taxpayer money on medical certification for recreational aviators, let’s focus on changing the way the FAA does business to make it easier and more affordable to put modern safety systems in all types of aircraft.

Let’s get more people flying, build more and better airplanes, create new jobs, and grow the economy. General aviation is an important economic engine and it has the potential to do much more. Let’s make the General Aviation Pilot Protection Act the first step in reducing the bureaucracy and bringing the FAA into the 21st century.

This Act will allow thousands of aviators, who have a pilot’s license, to fly recreationally under limited conditions, without having to deal with the FAA’s medical bureaucracy, thus saving aviators and the government millions of dollars each year.

Since introducing GAPPA, I have heard from countless aviators, airport managers, and business owners who have said, in short, “Well, it’s about time.” The General Aviation Pilot Protection Act, at its core, is a bill about jobs. And perhaps more important to the GA community, it is meant to protect a way of life that we all believe in. Please call your state’s U.S. representatives and senators and ask them to co-sponsor and support the bipartisan General Aviation Pilot Protection Act.

Todd Rokita is a congressman representing Indiana's 4th District and Indiana's former Secretary of State as well as an AOPA member.