Get the app Get the app
Already a member? Please login below for an enhanced experience. Not a member? Join today
News & Media Trojan Horsemen to perform at Indy Fly-In 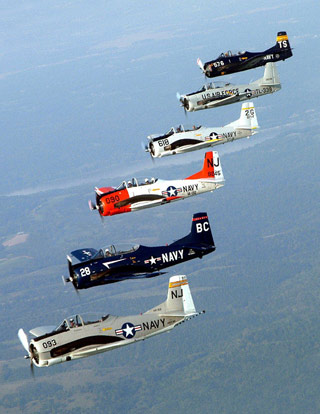 The Trojan Horsemen flight demonstration team, based in Cincinnati, Ohio, will delight attendees at AOPA’s Indianapolis Fly-In May 31. The group has advised AOPA that it plans to perform formation passes over Indianapolis Regional Airport with four North American T-28 Trojans before landing about 10 a.m. to participate in the fly-in static display. The team said it will depart around 2 p.m.

The group, which has six T-28 Trojans and seeks to promote the importance of military aircraft and preserve historical warbirds, is celebrating its tenth anniversary of performances this year.

“We’ve turned a lot of avgas into a lot of smiles, touching thousands of vets and their families … and after all, what more noble purpose could we have than to honor the veterans for whose sacrifices made it possible for us to enjoy these freedoms?” said Trojan Horsemen Team Manager and Founder Jim Stitt in the team’s mission statement retrospective.

During airshows, the formation and aerobatic demonstration team performs a “Salute to the Armed Forces of the United States” that is choreographed to patriotic music. Their performances also support the Veterans Airlift Command.

Plan your arrival to Indianapolis Regional

Pilots flying in to Indianapolis Regional Airport (KMQJ) on May 31 should download the flight procedures and notam. AOPA has established Indianapolis Metropolitan Airport (KUMP) as the official fly-in reliever airport and is offering free transportation between it and Indianapolis Regional every 30 minutes from 8 a.m. to 6 p.m. on May 31. Those planning to make a weekend out of the event can book a rental car through AOPA for exclusive discounts from Enterprise, National, and Alamo.

During the fly-in, attendees can check the weather and file a flight plan with DTC DUAT, the official weather sponsor of AOPA’s Regional Fly-Ins.