The inside story of an Ebola evacuation mission 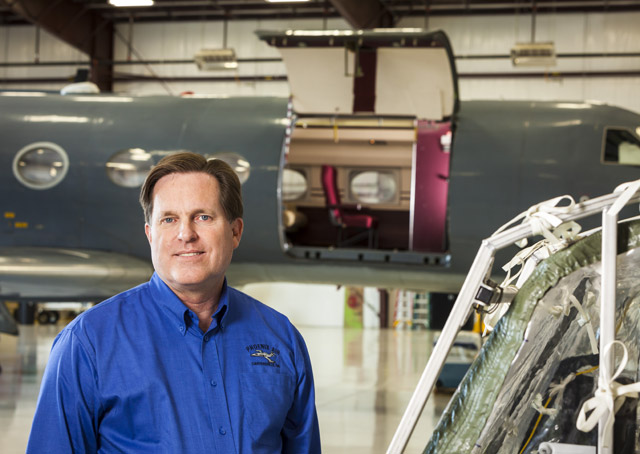 When Mike Ott’s dad took him up for his first airplane ride in a Piper Cherokee, little could he imagine that his current flying job would attract worldwide attention. Ott’s flying career began in the U.S. Marine Corps, when he flew Boeing-Vertol CH-46E Sea Knights in Okinawa, and then participated in the 1990-91 Desert Shield and Desert Storm operations in Kuwait. While in the Marines, Ott earned a master’s degree in international relations, and then served for five years as a foreign service officer in the U.S. State Department as a Department of Defense liaison. One of his areas of responsibility was Liberia—a foreshadowing of what was to come. 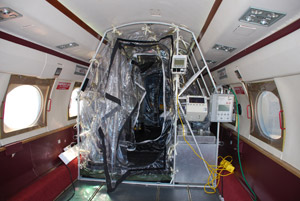 His career took another turn in 2001, when he was hired as a Learjet 35/36 first officer flying for Phoenix Air Group. Phoenix, a Cartersville, Georgia-based charter carrier, offers executive, cargo, military, and air ambulance services, and operates a fleet of some 40 turbine airplanes. Three of them are Gulfstream IIIs fitted with a large cargo door.

Phoenix had a number of government contracts that gave Ott the chance to fly Class I dangerous goods (explosives) and perform numerous international rapid deployment air ambulance evacuation missions. “By 2008,” Ott said, “we started to wonder: What if we have to bring infectious patients back from overseas?” Phoenix sketched out its idea of an airborne biomedical containment system (ABCS) and, with the help of the Centers for Disease Control (CDC), earned government approval as a biocontainment unit.

“And then the ABCS was shelved,” Ott explained. “And then our contract expired in 2010. The government then paid us $10 a year to store the ABCS.”

Until July 31, 2014. That’s when the U.S. State Department hired Phoenix to evacuate the first Americans infected with the Ebola virus from Liberia. And when the first grainy, nighttime footage of the mysterious gray Gulfstreams began to appear in the media as they delivered Ebola victims to American hospitals. They were Phoenix’s G-IIIs, of course, and Ott captained the first G-III Ebola evacuation support mission carrying three exposed but asymptomatic patients.

Since then, Phoenix’s 16 G-III pilots have flown 12 Ebola missions out of west Africa—11 with symptomatic patients, and one with a patient exposed to Ebola but asymptomatic.

“People always ask if we’re afraid of catching Ebola,” Ott says. “And the answer is no. Remember, we’re accustomed to flying dangerous goods, so we know how to be careful, we trust our medical staff, and we know that the ABCS is robust.

“It’s basically an airtight rectangular chamber made of thick plastic, big enough for both patients and doctors or nurses. There’s a fan that feeds air into it, and an air exit fitted with two four-inch-thick HEPA [high-efficiency particulate air] filters. So it’s a negative pressure vessel, meaning no contaminated air can escape. For additional safety, the Gulfstream’s standard outflow valves—located in the front of the airplane—are shut off, and new outflow valves are installed in the aft cabin. So all outflow goes out the rear of the airplane, and away from the occupants inside.”

Ott shows a photo of a pilot in the Gulfstream’s cabin in flight, with the ABCS in the background, a patient inside it, and the medical staff suited up in biohazard gear. The pilot is in his shirtsleeves. “He can’t be infected,” Ott says, “Because it can only happen via direct contact with a patient’s body fluids.” 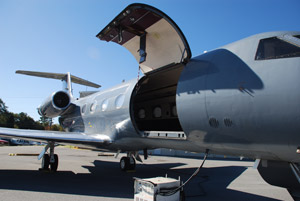 “What if the plastic gets torn?” I ask.

“That’s why we carry a roll—no, two rolls—of duct tape,” Ott says. And just in case, the pilots have protective suits at the ready.

Ott had a shoulder fracture in late summer, so now his duties focus on decontamination and procedures monitoring. “First, we use a 600-part-per million hydrogen peroxide fog, with the trash bags open. Then we hit the airplane and its contents with quaternary ammonia, followed by a second treatment with the hydrogen peroxide. Then the entire decontamination process is confirmed and/or repeated before the ABCS is burned,” Ott explained. “Finally, we test to see if the virus is killed by using a ‘spore strip.’ It’s a strip with spores on it, and we watch the spores to see if they’ll grow. If they do, then we do the decontamination drill all over again.

“And at every step of the donning and doffing of the biohazard suits, patient movement, and entering and exiting the ABCS and the airplane, there’s close monitoring and strict adherence to checklists to ensure that no lapses in containment occur,” he said.

Ott drew a lot of attention at the recent National Business Aviation Association convention, when he was a panelist on an “Ebola and Business Aviation” discussion. He held a standing-room-only audience spellbound as he revealed the workings behind the gray Gulfstreams.

Of Ebola, he said that the disease is “nowhere near done. That’s because scared people typically run and hide if they can.” It’s nice to know that Ott and his fellow pilots are doing their best to minimize the damage.

AOPA Pilot Editor at Large
AOPA Pilot Editor at Large Tom Horne has worked at AOPA since the early 1980s. He began flying in 1975 and has an airline transport pilot and flight instructor certificates. He’s flown everything from ultralights to Gulfstreams and ferried numerous piston airplanes across the Atlantic.
Go to Thomas A. Horne's Profile
Topics: Public Benefit Flying, Aviation Industry