Get the app Get the app
Already a member? Please login below for an enhanced experience. Not a member? Join today
News & Media Cessna announces extended range for Latitude

With the first flight of its fourth and final test airplane on Sept. 30, the Cessna Latitude flight test program kicked into high gear. The program is already two-thirds complete, Textron Aviation officials reported to members of the aviation media on site to witness the flight from Wichita Mid-Continent Airport. The flight test fleet has racked up more than 600 hours across more than 260 flights.

With that many flights in the logbooks, the company is able to report that the projected range will be some 200 nautical miles farther than originally announced. Instead of 2,500 nm, the Latitude will make 2,700 nm at long-range cruise with NBAA IFR reserves. From Orlando, the model can range as far as Manaus, Brazil, to the south; Goose Bay, Canada, to the northeast; and Calgary, Canada, to the northwest. Some of the additional range comes from a greater fuel volume than anticipated during the design phase. 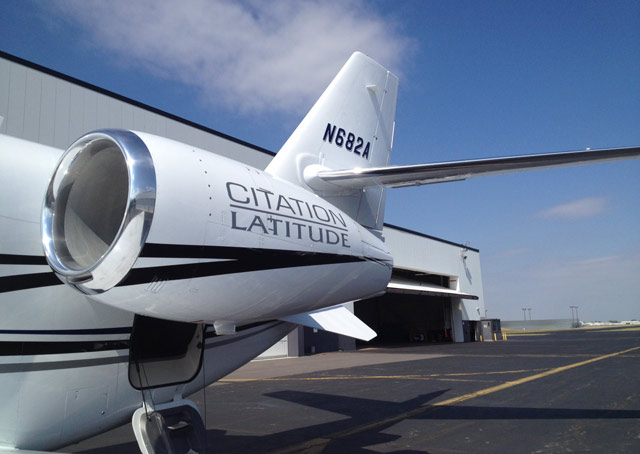 Meanwhile, Textron also announced that the Latitude is promising improved runway performance over the original plan. At maximum takeoff weight, a Latitude can clear a 50-foot obstacle in just 3,668 feet, compared to the original projection of 4,030 feet.

The Latitude is the first midsize business jet with a cabin height of six feet. Reporters toured P2, the second flight test airplane, which has been equipped with a production interior that will debut at the National Business Aviation Association convention in Orlando in October. With its flat floor, six-foot ceiling, and nearly 6.5-foot width, the airplane feels wide and spacious. The expansive feel is enhanced by the new style and shape of windows that are 30 percent larger than typical Citation windows. The windows feature a two-inch translucent frame that can be optionally lit by LEDs. 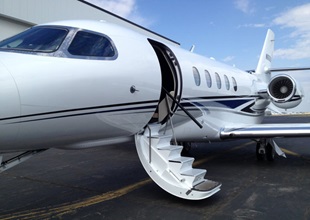 The nine-seat interior includes a club configuration plus two forward facing seats in the back. All the way in the back is a large lavatory with closet and a belted seat facing the potty; the potty is externally serviceable. A sliding hard door encloses the lav space. Up front, a two-place bench seat faces the door. A galley is located just behind the pilot’s seat. All of the passenger seats have USB charging stations. Passenger entertainment comes in the form of the wireless Clarity cabin management system. Passengers can use an app on their smartphones to control cabin lighting, temperature, and entertainment. A high-speed Wi-Fi Internet connection provides access to streaming movies and other entertainment displayed on personal mobile devices, eliminating the need for screens throughout the cabin. Recessed side panels at each seat provide a convenient place to stow mobile devices when not in use. An automatic pressurization system keeps the cabin pressure at no higher than 6,000 feet when the airplane is at its maximum cruise altitude of 45,000 feet.

New to Cessna airplanes is an electrically assisted cabin door. Lift the external latch, and the airstair door slowly descends for boarding. Once a mechanical latch is released inside, a push of a button opens the door from the inside. The wide cockpit features the Garmin G5000 cockpit with three 14.1-inch displays and four touch screen controllers.

According to Chris Hearne, Vice President of Jets for Textron, the systems are so mature that the FAA isn’t requiring the usual function and reliability tests common in most such certification programs. However, Cessna plans to conduct its own service testing. The Latitude borrows heavily from the Citation Sovereign Plus for its wing and tail components and systems, although the fuselage and cockpit are all new.

The Latitude has a base price of $16.2 million. Textron plans to begin deliveries in the second quarter of 2015. 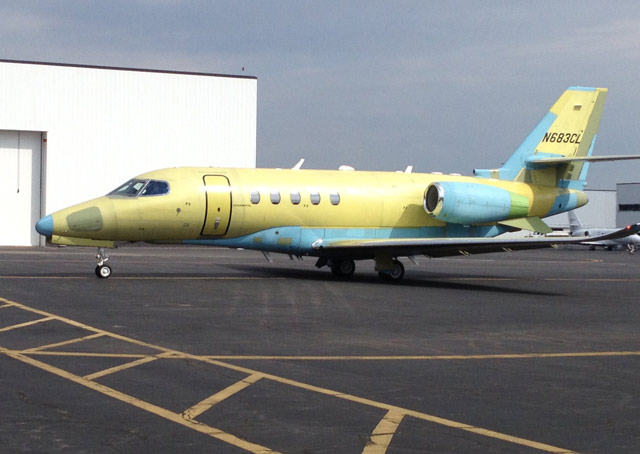 Editor in Chief
AOPA Editor in Chief Tom Haines joined AOPA in 1988. He owns and flies a Beechcraft A36 Bonanza. Since soloing at 16 and earning a private pilot certificate at 17, he has flown more than 100 models of general aviation airplanes.
Go to Thomas B Haines's Profile
Topics: Aviation Industry, National Business Aviation Association, Aviation Organizations