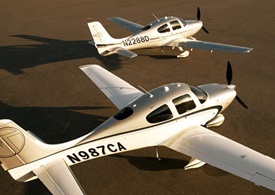 Cirrus Aircraft  and OpenAirplane have collaborated to offer rental privileges through OpenAirplane for pilots who complete Cirrus factory training, allowing those pilots to rent Cirrus aircraft without needing an OpenAirplane checkout.

OpenAirplane, created to offer pilots access to many aircraft in many locations with a single checkout, has grown to more than 70 locations in just over a year, with more than 250 aircraft of various models in a network that continues to grow. The agreement with Cirrus essentially aligns two standardized training programs: the portable (and model-specific) rental checkout system of OpenAirplane, and Cirrus Approach, the aircraft maker’s transition and recurrent training program for owners that is taught by Cirrus Standardized Instructor Pilots.

“By integrating OpenAirplane into Cirrus Approach, we can help more pilots get access to more planes in more locations,” said Cirrus Director of Flight Standards Travis Klumb, in a news release.

“Standardization is the secret sauce that makes OpenAirplane work for pilots, operators, and the aviation insurance underwriters,” said OpenAirplane co-founder Rod Rakic, in an email responding to follow-up questions about the Oct. 16 announcement. OpenAirplane’s checkout (dubbed the “universal pilot checkout,” though it is model-specific) was modeled on the Civil Air Patrol checkout. CAP pilots have a significantly lower accident rate, Rakic said, and the standardization of training and pilot checkouts is given much of the credit.

“It’s how we sold the whole concept of this to the insurance underwriters,” Rakic said.

Insurance is available to OpenAirplane participants at rates significantly less expensive than the typical instruction and rental policy, thanks to pilot qualification and training that is documented by the OpenAirplane system. Participating pilots gain access to multiple aircraft with a single checkout, including eight Cirrus aircraft now available through OpenAirplane’s network at five locations nationwide. Rakic said seven more operators in seven new locations have committed to join the OpenAirplane network.