Get the app Get the app
AOPA will be closed July 4th, in observance of the Independence Day holiday. We will reopen at 8:30 am ET on Tuesday, July 5.
News & Media Avionics sales climb

Worldwide avionics sales have increased in recent months, a trend that may be boosted further still by the approaching mandate to install Automatic Dependent Surveillance-Broadcast transmitters for flight where a Mode C transponder is currently required.

The Aircraft Electronics Association began collecting sales data from members in 2012, and released its first market report in 2013. Data released Sept. 2 shows the continuation of a trend that is encouraging to the industry: a 6.8-percent increase in worldwide avionics sales for the first six months of 2014, compared to the same period the year before.

In March, AEA released data for 2012 and 2013 sales that showed a 6.9 percent year-over-year increase; the data is supplied by nearly two dozen avionics manufacturers—including the market leaders—to an independent accounting firm that tabulates the totals on behalf of AEA.

The retrofit market appeared to gain some ground, with 48.8 percent of the $1.3 billion in sales for the first half of 2014 falling in that category (the balance, 51.2 percent, was equipment sold for factory installation in new aircraft), compared to 46 percent for the 2013 sales.

Sales figures reflect the actual net cost of products sold, not the list prices, and do not include installation labor.

More than 200,000 aircraft in the U.S. general aviation fleet are not yet equipped for the ADS-B Out mandate set to take effect in 2020, and it is becoming increasingly unclear whether the existing shops will have the capacity to outfit all of those aircraft in time to meet the mandate. AEA President Paula Derks noted in a press release that a number of companies have introduced new products that reduce the cost of compliance.

Independent audits have raised questions about the FAA’s ability to meet various benchmarks on the NextGen air traffic modernization timetable, though the agency has shown no willingness to be flexible about the ADS-B Out deadline. AOPA continues to urge lawmakers and other federal officials to leverage existing cockpit technologies to move NextGen forward before imposing an ADS-B mandate. 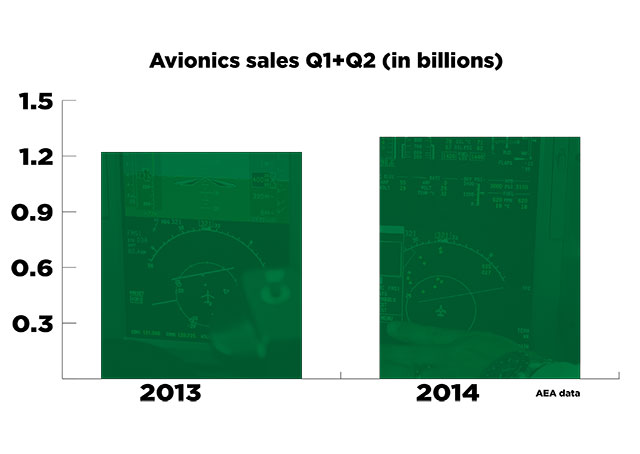