Get the app Get the app
Already a member? Please login below for an enhanced experience. Not a member? Join today
News & Media Presidents meet in Wyoming

The first fly-in meeting of the Young Presidents' Organization's Aviation Network drew more than 150 people to Alpine Airpark, an upscale fly-in community in the natural beauty of far western Wyoming.

They came to the three-day event in more than 50 airplanes ranging from corporate jets to vintage and bush airplanes, and they participated in outdoor events and heard briefings from aviation industry leaders Scott Ernest, President and CEO of Textron Aviation and Shane Tedjarati, president of Honeywell’s Global High Growth Regions. George Dom, a former commander of the Navy’s Blue Angels; Stu Horn, owner of Aviat Aircraft; and Tom Haines, editor in chief of AOPA media, also gave presentations.

"It's a pretty special group of individuals," said Cyrus Sigari, co-founder of jetAVIVA, a YPO member who leads the aviation network. "We come to share insights into our personal, business, and aviation lives—and hopefully it will be the first of many such gatherings."

The Young Presidents' Organization is an international, 18,000-member organization with some tough entry requirements. Members must be high-level officers or board members of their organizations by age 45.

The location, Alpine Airpark, is a picturesque and thriving community in the shadow of the Grand Tetons that has been transformed in the past 10 years from a forlorn and dusty strip to a magnet for pilots in search of a unique western aviation adventure. Bill Wiemann, founder of Alpine Aviation, started the residential community and built more than 50 homes there and extended the runway to 6,000 feet. More recently, Steven C. Funk, an international property developer, vastly expanded it by adding 65 acres in an adjoining area called the Refuge.

Textron's Ernest, who was named CEO of Cessna Aircraft Co. in 2011 and oversaw the acquisition of Beechcraft early this year, gave an upbeat assessment of the combined organization saying it will make major investments to enhance its product line. He also hinted strongly that a single-engine version of the venerable King Air twin turboprops is an active project.

“You’ll see a lot more investment going into the Beechcraft side of the business as well as the jet side,” he said. “You might see a King Air with just one turboprop on it.” 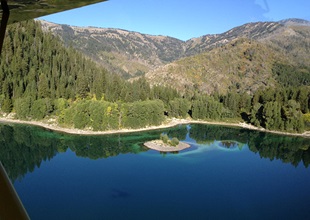 Ernest said he expects to announce a launch customer in the near future for the Scorpion, a two-seat reconnaissance and light attack jet Textron built on spec, and that it will dramatically reduce hourly flight costs for military customers.

Ernest said workers at the formerly independent Cessna and Beechcraft, both based in Wichita, have quickly been fused into a single organization with shared goals and a single fate.

Honeywell's Tedjarati, who has worked extensively in China, said the government there is determined to build an "aviation ecosystem" that includes general, business, and commercial aviation. But the world's most populous country has no GA or business aviation culture—and he said building one from scratch is a long-term proposition that could take 20 years or more.

Tedjarati said he is certain China will achieve its aviation goals, however, and he's never encountered a more focused, determined, or tenacious people anywhere.

“If there is a culture more studious, hard-working, or willing to start from the bottom, I don’t know of it,” he said.