Get the app Get the app
Already a member? Please login below for an enhanced experience. Not a member? Join today
News & Media Navigation by touch

Editor's note: This article was updated Sept. 30 to include a brief statement from Garmin. 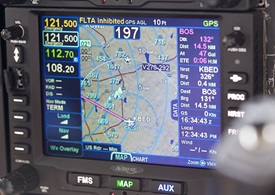 With the prop turning and the panel powered up, Avidyne Vice President Steve Jacobson unfastened a single screw holding the Garmin GNS 530 in the center of the panel, removed the entire unit, and slid an Avidyne IFD 540 into the empty slot. Less than a minute after he began, the Avidyne unit came to life, a company logo followed quickly by the standard legal disclaimer.

The exercise illustrates the core strategy behind the IFD 540/440: Replace the Garmin 530/430 series units with minimal fuss, adding a rich set of new features. Jacobson was eager to demonstrate that the IFD 540—a FMS/GPS/NAV/COM designed as a plug-and-play replacement for the tens of thousands of aging Garmin GNS 530s— could be swapped literally "on the fly."

“I put this litter adapter tray in there, just a spacer plate, when I fly with a 540 on top of a 440 for flight testing,” Jacobson said, noting the back-end connectors are essentially identical, and inviting a reporter to time the Garmin-Avidyne swap. 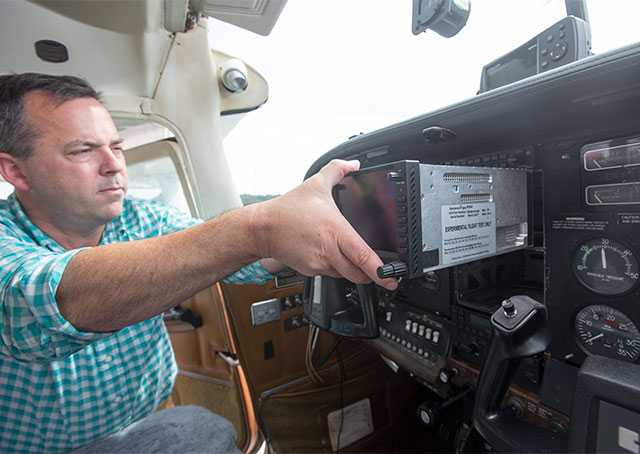 For aircraft already equipped with a wide-area augmentation system (WAAS) GPS antenna, it really can be that simple: Unscrew, slide out, slide in, screw, done. But the IFD 540 (certified ahead of the IFD 440, though that was not the original plan), brings modern features and functions into the cockpit, as Jacobson went on to demonstrate in an hour-long flight that covered many of the standard flight test checklist items used for FAA certification that was announced in July.

While the technical standard order and approved model list were a long time coming, they are also comprehensive, with more than 1,000 aircraft models on the AML spanning most of the general aviation fleet—including virtually all aircraft already equipped with about 130,000 GNS 430/530 devices. Avidyne has tested both the IFD 540 and IFD 440 on engineering benches and in flight, with many of those hours flown in the Skylane used for a recent demonstration for AOPA.

Departing from Hanscom Field (KBED)  in Bedford, Massachusetts, a stone’s throw from the company headquarters (located in Lincoln, under the traffic pattern), Jacobson demonstrated the relative ease with which routes can be created, approaches flown, and terrain and obstacles avoided with timely alerts that take the aircraft’s movement into account. (The terrain warning feature depicts a “splat zone” where the aircraft will end up in the absence of timely action by the pilot.)

A menagerie of avionics filled the test aircraft's panel, with extra antenna ports and circuits used to mount devices made by Garmin and other avionics manufacturers for testing to ensure interoperability. Jacobson noted that a Garmin G500 display occupies the space recently dedicated to multiple horizontal situation indicators (HSIs). He had a pair of IFD 540s installed for the flight, along with an Avidyne intercom and Avidyne autopilot (which handled most of the flying).

Jacobson said Garmin was unsurprisingly unhelpful when it came to engineering the various interfaces, and the development timetable was extended in part by the exhausting task of reverse-engineering the Garmin devices. (Garmin officials said that they were never asked for help from Avidyne, acknowledging that in the competitive avionics market they would not be inclined to expend resources in helping create a competitive product.) The ability to hot-swap the devices is the fruit of Avidyne's labor. 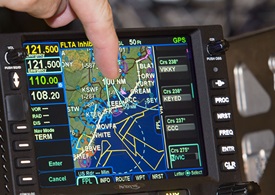 Avidyne has reduced the amount of pilot labor required for a variety of tasks. Long routes can be built quickly by choosing an airway entry and exit, the system automatically populating the flight plan with waypoints along the way. Rubber-banding, is another time-saving feature, allowing a flight plan route to be dragged and dropped to a new waypoint with a fingertip. Jacobson said care was taken to not only emulate the back end of Garmin GNS 430/530 devices, but the user interface as well: virtually all functions (except relocation of the cursor) can be accomplished with either the buttons and knobs familiar to Garmin users, or the touch screen. Or a combination of both, depending on the situation (pilot workload, smooth or turbulent air, phase of flight), and pilot preferences.

Avidyne Marketing Director Tom Harper supplied results from a button-pushing challenge, comparing the number of knob twists and button pushes required to program a flight between North Carolina and New York using both the IFD 540 and the GNS 530. The older Garmin unit required up to 10 times as many “input actions” as the Avidyne, and Harper said that fewer input actions bring safety benefits along with the convenience, reducing “head-down time” during flight—particularly when plans change or approach is imminent.

During the demonstration flight, very few keystrokes were required to select and activate an approach, though an exact number of clicks was not counted.

For those who want to fly with hands completely off, both the IFD 540 and IFD 440 have wireless connection capability, allowing Bluetooth keyboard connections for data entry, and Wi-Fi data transmission to tablets and other portable devices running popular flight planning or EFB software. A USB port allows for in-flight device charging, as well as data downloads and uploads after flight (in maintenance mode). Users can download flight and system data using a USB drive, which will make troubleshooting much easier when needed, Jacobson noted.

The flight management system functions are based on Avidyne’s Entegra FMS, and will be familiar to users with Entegra experience. Avidyne announced in June the availability of a free IFD 540 simulator for iOS devices through the iTunes store. Priced at $16,995, the IFD 540 comes with a 10-watt nav/com radio that is upgradable to 16 watts.

Avidyne is still working to certify the $14,995 IFD 440, originally intended to enter the market first. Harper said the company hopes to make that announcement by year’s end. He declined to specify how many customers have made deposits on either unit, citing the sensitivity of competition; it stands to reason that some may be running short on patience.