Get the app Get the app
AOPA will be closed July 4th, in observance of the Independence Day holiday. We will reopen at 8:30 am ET on Tuesday, July 5.
News & Media Stalls, thermals, and fun

One Week Ready to Solo students catching on 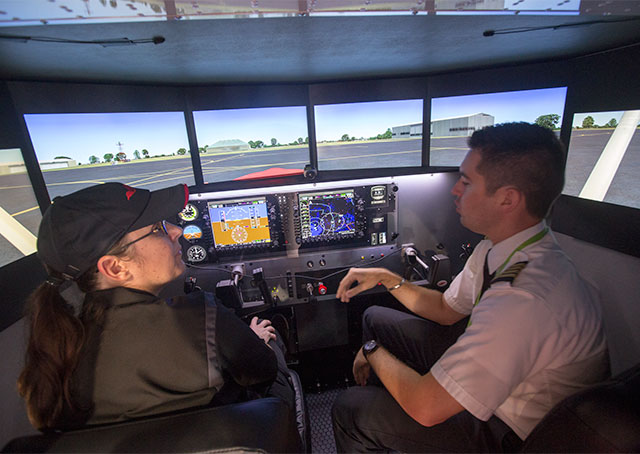 The rookies are catching on.

With three days of flying under their belts—and just two flights apiece in real-world aircraft—the three students training in the One Week Ready to Solo project are nearly ready to land on their own.

“Just being able to sit there and hammer it out is great,” said CFI Jeff Wolf, who has been working with U.S. Navy veteran Nik Oekerman on the fine points of slow flight, stalls, turns, and landings—upward of 50 of them so far, about 20 unassisted on Monday alone. Wolf said he’s seen Oekerman develop the decision-making skills that will serve him well as a pilot. “He decided when to go around. It’s pretty cool.”

Three students are taking part in a kind of experiment, a demonstration that a combination of skilled instructors, sophisticated simulators, and real aircraft (they’re flying RedHawks out of nearby Plant City Airport) can have them ready to fly on their own in a week. It happens that the week in question coincides with the Sun 'n Fun International Fly-In and Expo, and film crews and reporters from AOPA are documenting practically every move they make. So far, all that attention has not diminished the enthusiasm of the students—or their instructors.

Oekerman, for his part, said he loves occasional bumps, the sensation of the airplane rising or falling (one thing a simulator is hard-pressed to replicate), and he looks forward to a high-energy aerobatic ride that’s in the offing. Celebrity instructors lined up to take a turn with the students include Mike Goulian, Sean D. Tucker, and Patty Wagstaff. Oekerman can’t wait.

“I love hitting those thermals,” Oekerman said. An airplane capable of rolling nearly twice around its axis in a second? Bring it on. As for Wolf, Oekerman said, “I love how fast-paced my instructor is.” The adrenaline junkie hates to sit around, because it just feels wrong, but Wolf won’t let that happen. If he catches Oekerman sitting around, he finds a new task for his student to tackle.

Of the three, Oekerman reported the biggest difference in the experience of an actual aircraft compared to a simulator. Chris Graves, the Harley-Davidson engineer who managed a near-perfect score of 975 out of 1,000 on the Redbird Xwind on his third day of training said the simulator experience is “very real,” and taxiing is actually more difficult in the simulator than in real life. He suspects they made it that way on purpose.

“I’m having a blast, an absolute blast,” said Graves, who spent his first three days of flight training with Doris Gatewood of Aviation Adventures.

Dan Farrell of Cirrus Aviation has been working with Sherry Rosenkranz, who said she appreciated the smoother air during her second flight (April 20), a morning lesson. The air reminded her of driving a boat across glass-calm water. She said she didn’t mind her first stalls as much as she worried she might.

“What I had in my head, I was a little bit freaked out,” said the advertising executive. “We barely dropped at all.”

For Rosenkranz, the biggest thrill remains the moment of liftoff, when the wheels leave the ground. Her landings are coming, and she expects the simulator will help, there, too.

“I was able to get in the plane for the very first time and handle it all on my own,” Rosenkranz said of startup, taxi, takeoff, turns, and other basic maneuvers. “I envision the same with landing.”