Get the app Get the app
Already a member? Please login below for an enhanced experience. Not a member? Join today
News & Media ‘You have your own path’

‘You have your own path’ 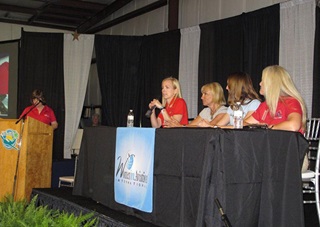 Ask questions, work hard, keep learning, and be yourself: These were among the pieces of advice offered by a panel of prominent women in general aviation at a Women in Aviation, International luncheon April 24.

The luncheon, a departure from Women in Aviation, International’s typical Sun 'n Fun breakfasts, helped mark the first Women in Aviation Day at the Sun 'n Fun International Fly-In and Expo. Karin Goulian of Goulian Aerosports, aerobatic star Patty Wagstaff, Chelsea “Abingdon” Welch of The Abingdon Co., and Angela West of Stallion 51, all pilots, discussed how they found their way to a career in the field and some of the obstacles they overcame.

Women in Aviation, International promotes and supports women in the aviation industry. The organization has grown to close to 12,000 members, according to WAI President Peggy Chabrian, and in 2015 gave out 102 scholarships valued at more than $600,000.

In the panel, Goulian encouraged attendees to work hard, pay attention, and constantly be learning. Welch passed down advice her mother gave her: “Be smart enough to be dumb enough to ask.” And Wagstaff, who defied naysayers to succeed in the male-dominated world of competitive aerobatics, urged attendees to be themselves.

“You have your own path, and you can do it your own way,” she said.