Get the app Get the app
AOPA will be closing at 2:30pm ET Wednesday, November 23rd, and will remain closed Thursday and Friday in observance of the Thanksgiving holiday. We will reopen Monday November 28th at 8:30am ET.
AOPA Members DO more LEARN more SAVE more - Get MORE out of being a pilot - CLICK HERE
News & Media Aircraft shipments slip 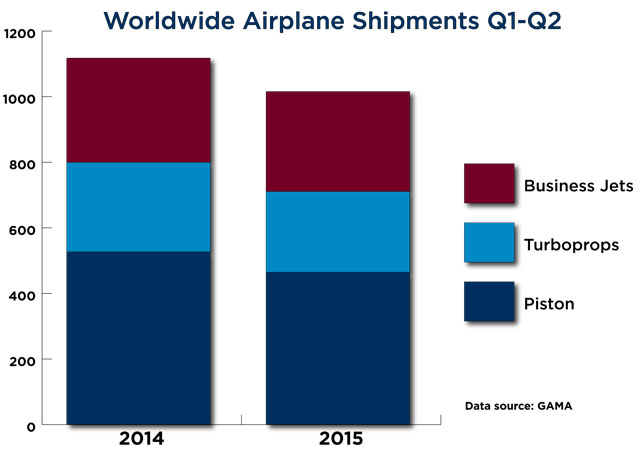 Aircraft sales slipped in the first half of 2015, and a political battle over the Export-Import Bank of the United States may add to the headwinds in months to come—particularly for U.S. aircraft makers, which account for the majority of world sales.

Strong demand for agricultural aircraft, which in recent years has propped up the turboprop market, appears to have slipped: American firms Air Tractor and Thrush Aircraft posted double-digit declines in the first half of 2015, with Air Tractor shipments down by 25 percent and billing declining 22.6 percent compared to the first half of 2014. Thrush suffered an even steeper drop-off, with shipments down 56.5 percent to just 10 aircraft, and billing off by 39.4 percent.

Air Tractor CFO David Ickert told a Texas television station that the firm may have to cut a quarter of its staff if the Export-Import Bank is not reauthorized by Congress. The bank, which finances foreign sales of U.S. goods, suspended processing of new loan applications and other new business since the July 1 deadline passed with no reauthorization from Congress. Some manufacturers, including Boeing, have opted to self-finance a limited number of sales to developing countries while the Export-Import Bank is in limbo; Ickert told the local television station that Air Tractor can subsidize the losses for a few months, but up to 80 jobs would be cut if the bank is not reauthorized in the coming months.

"So it puts 25 percent of our sales 25 percent of our jobs at risk and that has been communicated to Congressman (Robert) Neugebauer (R-Texas). It does not seem to have much impact on his position on this. In summary, it is nearly like the house wants to export jobs now and no American products because that is exactly the impact that will be felt," Ickert said.

Neugebauer, in a statement to the television station, said the bank’s operations will cost taxpayers $2 billion over the coming decade, apparently citing a May 2014 estimate by the Congressional Budget Office based on a fair value calculation.

“The Export-Import Bank empowers federal government bureaucrats to manage our local economy in Texas by picking winners and losers from Washington. For every company in my district that benefits from cheaper taxpayer-backed financing, another small business in my district is put at a competitive disadvantage,” Neugebauer said. “This is no way to get our entire economy back on track.”

The bank notes on its website that fiscal year 2014 operations supported $27.4 billion in U.S. exports and 164,000 American jobs, and generated a $675 million surplus.

GAMA President and CEO Pete Bunce reiterated a call for reauthorization of the controversial bank that has operated since the Great Depression era.

“Finally, fair global competitiveness for all GAMA members rests on the need for a global level playing field. Therefore, Export-Import Bank reauthorization remains a key priority for manufacturers,” Bunce said in a July 31 statement that accompanied the release of the latest data. 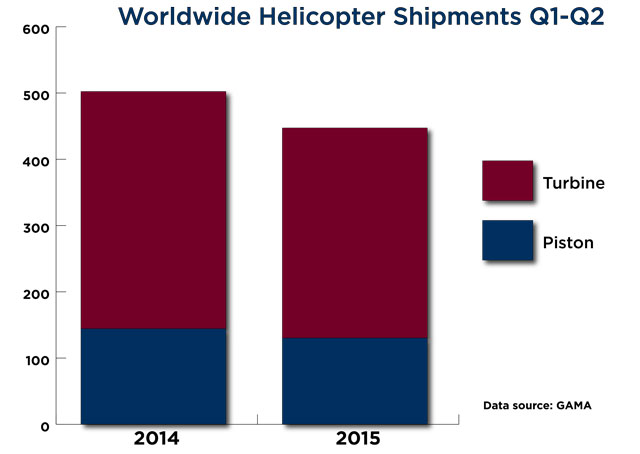 The Aircraft Electronics Association released data Aug. 3 showing total avionics sales of $1.1 billion in the first six months of 2015, including a second-quarter increase of 3.1 percent over the first quarter.

The overall numbers for the first half of 2015 are down, however, mirroring the latest data on aircraft sales from the General Aviation Manufacturers Association. The year-to-date avionics sales total for 2015 is down 8.5 percent compared to the first half of 2014; the retrofit market slipped 11.1 percent to $568.5 million. Avionics makers in the United States and Canada account for about two-thirds of world production.