'Home away from home'

The best days for flying are the best days for dining at Flight Deck Grill. Outdoor seating at the mobile café gives patrons a center-field view of skydivers, vintage taildraggers, and a range of amateur-built aircraft at Colorado’s Longmont Vance Brand Municipal Airport against the backdrop of the Flatirons. In the seven years since Dian Rennicke and her husband Chad set up a small street cart at the airport, their restaurant has grown to become the nucleus of a friendly airport community, a place where pilots trade stories, admire aircraft ranging from a 1929 Travel Air to an experimental twinjet, and dine on menu items with names like the “Fly-By On Rye” and the “Top Gun Burrito.”

On a clear summer morning, Dixon Herboldsheimer sat in front of the custom trailer that the Rennickes call a “rigstaurant” as jumpers circled over the far side of the field under brightly colored parachutes. Herboldsheimer flies his Piper Archer to Longmont each week when the weather is good to meet friends for breakfast. The 15-minute flight from Rocky Mountain Metropolitan Airport for a breakfast burrito, apple spice coffee cakes, and good company has become a tradition. He used to work at IBM with Dian, he said, and gets together with other retired IBM employees—some who fly, and some who don’t. “Just friendly people, people I know,” he said.

Dian and Chad came up with the idea for the business in 2009 while sitting in front of the local flight school on what they call “Liar’s Bench,” a wooden bench where locals chat and watch airplanes take off and land. As they watched the sunset, Dian said, they lamented that there was no place to get a burger and a beer while they enjoyed the view.

Having recently left the corporate world, Dian was eager to start a new venture in the restaurant business. In light of the lousy economy, however, Chad convinced her to start small. The next day, they asked the owner of the FBO if they could set up a food cart outside the building, and two months later, they set up shop with a stainless steel food cart with three basic menu items. If it was VFR and 50 degrees or higher, they were out on the asphalt selling hamburgers, hot dogs, and banger sandwiches, and their following began to grow.

Over the winter, the couple decided to expand. They sketched out the dimensions of a griddle, grill, and other equipment in chalk on cardboard and mapped out a floor plan for a trailer on the garage floor. In the spring, they set up at the airport in a custom trailer that Dian affectionately calls “Tinker.” Now in its seventh year, the restaurant attracts pilots, nonpilots, kids, and dogs.

Ken Bickers and his golden retriever, Quincy, are regulars at the food truck. One early afternoon in June, Quincy made new friends in the shade of the FBO with a view of Bickers’ newly completed, plans-built Pietenpol Air Camper on the ramp. Bickers said he comes to Flight Deck Grill for breakfast Wednesday through Sunday when he’s around, and even stocks up on frozen breakfast burritos at the end of the season. 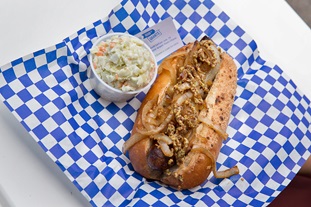 Inside the trailer, Dian poured iced coffee as employees, including the Rennickes’ daughter, Angie, worked the window and put burritos on the grill. Dian runs the show inside the trailer, while Chad, a pilot and Longmont city firefighter, said his job is to keep things working. He fills the propane bottles, fixes things, and talks to customers, he said, but the rig is Dian’s domain: “There’s a line in there I can’t cross,” he said.

The restaurant is open for breakfast and lunch on good VFR days in the spring, summer, and fall. Dian puts up a sign and lets fans on Facebook know when it will be away for airshows in the area. While most of the time four people work the restaurant, Dian said that for airshows they recruit “any family member that’s got a pulse” to help. (“Tinker” will make the trip down to Colorado Springs Municipal Airport for the AOPA Fly-In Sept. 26; RSVP now to reserve your meal. The restaurant will be back at Longmont Sunday, Sept. 27, for regulars and fly-in attendees who may want to fly out to the airport, north of Denver.)

The menu at Flight Deck Grill has grown from the original three-item lineup; Dian said she’s tried to get away from the cliché of a hot dog cart, and creating a menu for such a small space has required some creativity. Items on the “Flight Plan” include the “Whirly Bird” chicken sandwich, the “Crop Duster” veggie burger, and the “Midget Mustang” kids’ meal. Dian said she held a contest to name the “Fly-By On Rye,” a twist on the Reuben, one of the ways she engages the community in lieu of paid advertising.

The Longmont airport hosts a robust community of pilots. Many, including Chad, also are working on homebuilt aircraft projects: Chad is now working on a tricycle-gear RV-6A that he bought partially completed. Lancair and Maverick experimental amateur-built twinjet owner-builder Mike Seavall, who said he’s out at the airport every day, said that the number of amateur builders and mechanics on the field provides a great knowledge base.

The food truck has helped bring that community of pilots together. Chad said some people have been at the field for 20 or 30 years, but “Until Dian started the restaurant, they didn’t know each other.”

Now, they sit under the green umbrellas at the Flight Deck Grill and share knowledge as they admire aircraft on the ramp. “This is my home away from home,” Seavall said. 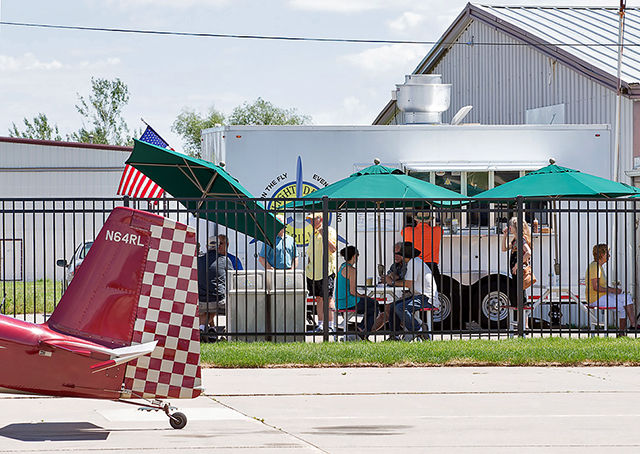 The Flight Deck Grill will make the drive down to Colorado Springs Municipal Airport to feed hungry pilots at AOPA’s Fly-In Sept. 26. Learn more about the fly-in and RSVP online.