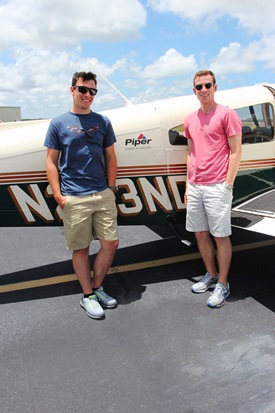 Two college friends celebrated a recent graduation by flying the East Coast—and gave back to the aviation community as they traveled.

Colin Hassell of Aberdeen, New Jersey, and Zach Rose flew roundtrip from Massachusetts to Florida. The goal wasn’t simply to celebrate Hassell’s graduation from Bucknell University, but to promote aviation wherever they could.

Throughout the week, as the pair made stops, they worked with local organizations to put on events for children, giving the participants access and exposure to aviation. Participating organizations included the YMCA of Mansfield, Massachusetts; the Boys and Girls Club of Norfolk, Virginia; EAA Chapter 242 in Columbia, South Carolina; and Sun 'n Fun in Lakeland, Florida.

Hassell said aviation inspired him from a young age, when, on school holidays, he and his father would to go to Newark Liberty International Airport to watch jets take off and land. The memories remained with him, and while he was enrolled at Bucknell he earned a private pilot certificate. As he neared graduation, he recruited Rose, a sophomore and fellow mechanical engineering major, to join him on the trip.

“I had a feeling of indebtedness to all the people who’d helped me achieve my high-flying dreams, so I decided to introduce others to the joy of flying,” Hassell said. He recently joined Southwest Airlines as an associate business analyst.