Get the app Get the app
Already a member? Please login below for an enhanced experience. Not a member? Join today
News & Media 'Little guy at the fence'

'Little guy at the fence'

Boy who waved at airplanes gets to fly one 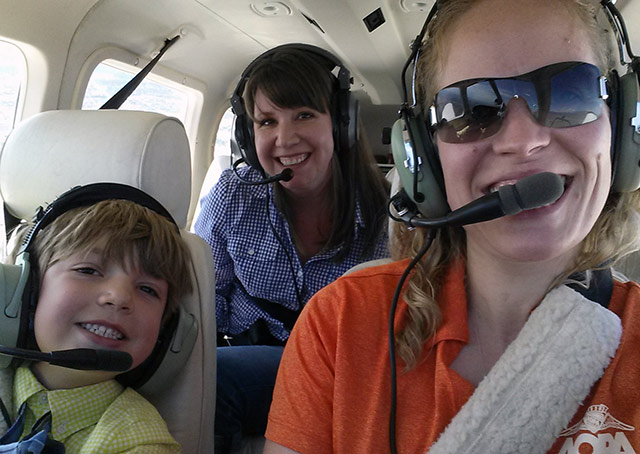 It didn’t take long after the captain of a Southwest Airlines Boeing 737 returned a friendly wave from an airplane-watching youngster and his grandfather at a New Mexico airport for the five-year-old aviation buff to pay the kindness forward.

Spotting airplanes had been a tradition for the Hughes family even before they relocated to Albuquerque, New Mexico, from the Chicago area. But to call Hudson’s heart-warming journey from outside the fence onto the flight line at the Albuquerque International Sunport a highlight would be an understatement.

“It’s all he’s been talking about, still,” said his mother, Trisha Hughes.

Hudson, whose dad is the principal of a local middle school, is the youngest of three children. He and his sister, 13, and brother, 11, have had plenty of plane-spotting experience, thanks to their grandfather, Dan Dvorak.

“Dad enjoys airplanes, and is always pointing them out to us. He knows the planes,” Hughes said by phone. 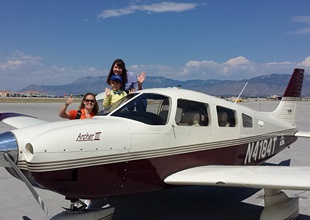 Watching airplanes has created a special connection for Hudson with his grandfather, who has been helping out a great deal with family childcare since Dvorak’s wife passed away a year ago, Hughes said.

Hudson “equates those experiences” spotting aircraft with his grandfather. As a result, special family memories are being made, she said.

On a day in July, Hughes was observing the plane spotting (and a few waves) from the car. “The two of them were so cute at the fence together,” she said.

A Southwest Airlines Boeing 737 was being pushed back from a nearby gate. When it got close enough to “try to make some kind of contact,” Hudson and Dvorak waved.

Southwest Captain Mike Hickey saw them. He pulled back his window and waved back, creating “an instant little spark” in Hudson and Dvorak.

“It was so fun for me to watch,” Hughes said. “I was just so touched that someone would take the time to acknowledge this little guy at the fence.” 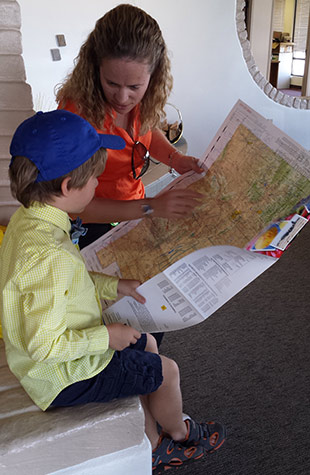 The fun was just beginning. After Hughes posted a photo in which she had captured the moment—and thanked the pilot—on Facebook, the airline got in touch, and arranged for Hudson to meet the captain, check out an airline cockpit, and come away with some memorabilia.

Hudson and Hickey quickly bonded, with the pilot taking time to satisfy Hudson’s many and detailed inquiries. The extent of his curiosity came as a surprise to his mom.

“I didn’t even know that Hudson had that many questions in him, to be honest with you,” she said.

In news coverage of their meeting, Hickey said he returned Hudson’s wave because the airline pilot could remember his own days waving at airplanes at Love Field in Dallas, Texas.

Platt, whose travels would soon bring her to Albuquerque, saw the story, and contacted the family to extend to Hudson and his mom an invitation for a ride in the Archer. They met Aug. 21 at the Sunport, and were joined by Steve Summers, director of the New Mexico Department of Transportation’s Aviation Division, who presented Hudson with some more aviation souvenirs.

Platt showed Hudson on a chart where they would be flying, and was pleased to learn that he loved maps. Hughes said she was impressed and pleased to find out how eager members of the aviation community were “to share their knowledge and inspire the next generation of pilots.”

Platt took Hudson, clad in his best bow-tie-and-cap finery for flying, and Hughes on a 25-minute scenic flight around the local area. The flight was arranged to maximize right turns so that little Hudson, in the right front seat, could see the view from his side window. He also enjoyed some right-seat “stick time.” “He was a natural at it and is destined to be a pilot,” Platt said. 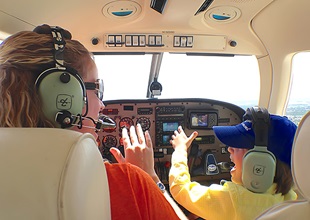 Hudson’s face lit up when Platt asked him, “Are you ready, Captain?” They overflew downtown Albuquerque, looked over the Rio Grande River, and inspected the foothills of the nearby Sandia Mountains.

Returning for landing, Platt advised the tower crew that they were getting a wave from her very excited 5-year-old passenger. The air traffic controllers chuckled and said they would return the wave even if those outside could not see it because of the tower’s darkened windows. As Platt taxied in, Hudson had another chance to reach out—this time directing his wave to his former plane-spotting position outside the fence, where his grandfather awaited the flight’s return.

Later, Hudson had one more question: “Next time, can we fly to Denver?” (Hudson chose Denver, his mom explained, because a young lady friend resides there—an idea he had also run by Captain Hickey.)

Few pilots would be surprised that the flight was as much fun for Platt as it was for her passengers.

“It reminds you all over again why you even did this to begin with,” she said. “The boy that was waving at airplanes only a few days ago was waving at people from an airplane.” 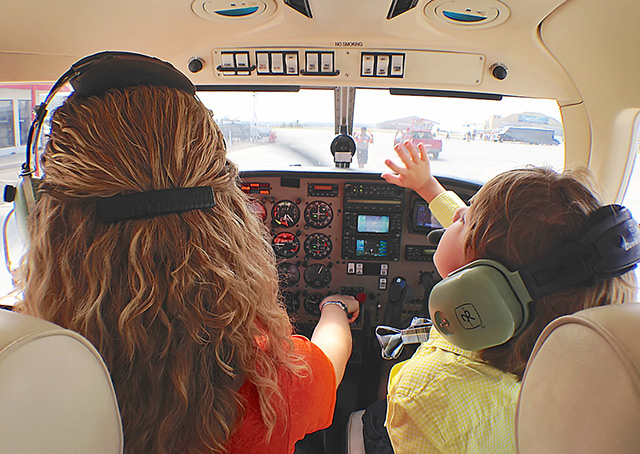