Filmmakers want to bring 'Flight of Passage' to big screen

Two filmmakers want to bring Rinker Buck’s iconic Flight of Passage to the silver screen, and they are asking for your help to make it happen.

Colin Ebeling and Henry Saine have launched an Indiegogo crowdfunding campaign to make a short film of Flight of Passage. The memoir describes how Buck and his older brother Kernahan flew a Piper Super Cub from New Jersey to California in 1966. They were 15 and 17 years old, respectively, and at the time they were the youngest pilots to make the cross-country trip.

Ebeling and Saine and their company, Just Chorizo Productions, hope to raise $35,000 by Sept. 14. As of Aug. 26, they had raised $16,280. Contributions of all sizes are accepted, but perks are offered at certain levels. For $25 you can get your name in the credits of the short film; for $500 you can visit the set and take part in a walk-on role; and for $2,500—the top level—you can get all the perks as well as a ride in a Stearman.

Flight of Passage resonated with Ebeling, who read it while learning to fly in 2007. “Flight of Passage just basically spoke to everything I was experiencing in learning how to fly. It was all of the adventure and excitement and also the discipline, and I just sparked to its message and everything it said about flying and life in general,” he said. Ebeling eventually earned his private pilot certificate and flies out of Whiteman Airport in Los Angeles. 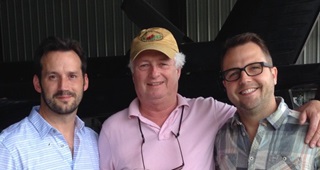 Much loved in the aviation community, Flight of Passage needs to be brought to a wider audience, Ebeling said. “I truly feel that its appeal is much more universal. It’s a coming-of-age story [with] family relationships, brotherhood, adventure, and coming to terms with yourself and the hand you were dealt in life. It’s one of these wonderful pieces that didn’t quite break out…it deserves to. We want a larger audience to be a part of it and be able to experience [Buck’s] work.” Buck is profiled in the September 2015 AOPA Pilot. His 2015 book, The Oregon Trail: A New American Journey, is on the New York Times best seller list for hardcover nonfiction.

The film could inspire a new generation “to see what flying’s all about, the adventure, the discipline, the camaraderie of pilots,” Ebeling said.

Ebeling and Saine will start by making a short film that they can pitch to investors, actors, and studios. This tactic is because “pretty much the only thing that gets greenlit these days is existing, proven properties,” Ebeling said. That’s why you’re seeing a slate of superhero films and sequels at your local cinema these days.

“We’ve created a lot of sales materials and gotten a lot of interest from studios and well-known actors, but it’s hard to get somebody to pull the trigger,” Ebeling said. “It’s hard in Hollywood to get an agent or a film executive to sit down and read 105 pages of a feature-length script, but if you send them a link to a short film they instantly understand what the project is about, and …they can see and hear and imagine how to market it.” The short film will showcase “some of the book’s best moments, including a flying sequence shot by Bill Richards, one of Hollywood’s best aerial cinematrographers,” according to the website.

Just Chorizo Productions produced the 2013 action science-fiction thriller Bounty Killer in this fashion. “Within a week of putting it out, we had gotten the green light,” Ebeling said. “Not only have we seen it work for others, it’s worked for us too.”

The process of making the short film has begun. The company has lined up a casting director, and once the funds are acquired, casting for the teenage Buck boys will begin. Shooting dates and locations will be finalized and a crew will be hired.

“We want to make a movie that harkens back to a different time,” Ebeling said.