Get the app Get the app
Already a member? Please login below for an enhanced experience. Not a member? Join today
News & Media Santa makes Tangier Island house call

It’s not yet Christmas, but Santa Claus has already deployed his general aviation powers to brighten the day for a 5-year-old girl who is recovering from a serious breathing illness on tiny Tangier Island, Virginia.

Last week, Virginia State Patrol helicopter pilots evacuated Lilly Eskridge to Salisbury, Maryland, for an emergency breathing treatment after the youngster developed a violent cough that rattled her chest with every breath. Her condition was too severe to be treated at the island’s David B. Nichols Health Center, which is manned by local physician assistant Inez Pruitt.

“She stayed overnight at Peninsula Regional Medical Center and doctors did X-rays because her airway was blocked,” said Becky Eskridge, who confided that the GA helicopter pilots were instrumental in Lilly’s recovery. The chopper ride was a first for the family, but Eskridge said she’d rather not repeat it under those circumstances.

Eskridge looked on Dec. 5 as Santa (Ralph Hoover) bent down to give the now-recuperating Lilly a hug while she clutched a candy cane. 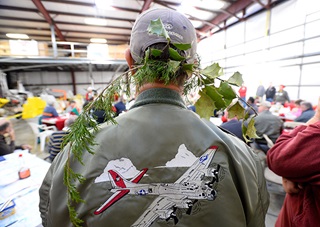 The tradition started 47 years ago, according to Ed Nabb Jr., who said his father had an idea to use his Ercoupe to bring a little joy to the island fishing village where culture has stood nearly still for centuries. “It struck my father that while he was cutting greenery, he thought, ‘Why not cut an extra bag?’ and that’s what started all of this back in 1968,” Nabb said during a safety briefing at Stevensville, Maryland’s Bay Bridge Airport, where pilots rallied for the trip to Tangier Island. Over the years, the event has grown to include dozens of aircraft and pilots, a pancake breakfast, and lunch on the island at Lorraine’s Seafood Restaurant.

“I lost track of how many boxes of pancake mix we had,” said Kim Allen, who began cooking at 6:30 a.m. “It was the best turnout we’ve ever had, and I’ve been involved with the run for the past five years.” 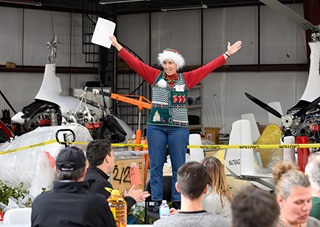 “The reason Santa [Hoover] is not flying himself is because he’s waiting for third class medical reform,” Woods said before pilots headed for their aircraft.

Bringing cheer to a remote island

With Mitch Lock at the controls of his Vans Aircraft RV-10, dubbed Rudolph One, Hoover (the bespectacled Santa) scanned for traffic from the right seat before the pair touched down on the 2,400-foot landing strip in the Chesapeake Bay.

The sight of Hoover’s authentic white beard and jolly red outfit caused dozens of the fishing village’s children to jump for joy and squeal with delight as the aircraft taxied to the ramp under a brilliant blue sky and 12-knot winds from the north. 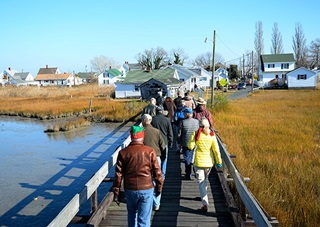 “Suffice it to say that this was, without a doubt, the most joyous aviation moment I have ever had,” said Lock, who later explained, “Being among this group of intrepid aviators who load their aircraft with holly and deliver it to the good folks of Tangier Island holds a special meaning for me. It is the essence of goodwill born by the holiday spirit.”

“Hi, would you like a candy cane?” Hoover asked as he approached a gaggle of youngsters on the ramp at Tangier Island while dozens of aircraft stacked up for final approach began their methodical touchdowns, reminiscent of the big iron at Atlanta’s Hartsfield-Jackson International Airport.

Tangier Island fourth-grader Dakota Dunivan dodged parked airplanes like a linebacker as she hustled to greet arriving pilots, grabbing their holly-packed bags with gusto and depositing them onto a golf cart for distribution to families. 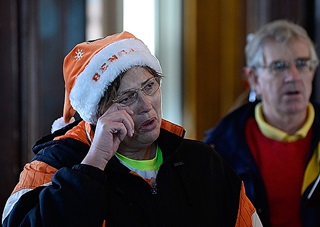 The 9-year-old’s ponytail danced as she worked the ramp with a smile and a purposeful stride. Surrounded by the pilots, Hoover, and a pair of Bonanzas idling nearby, Dunivan said she hopes to catch a ride in an airplane soon. “I sat in one, but I’ve never flown in a little airplane before. I think it’s really cool.”

After landing, about 100 participants walked down a narrow road and across a wooden bridge to the packed Swain Memorial United Methodist Church for an early Christmas service, where Hoover joined them after his special house call to Lilly.

Rev. John Flood told the Bible story of Joseph and Mary in a lilting old English accent that is common for the island’s 600 residents, and he closed his sermon with a special prayer for pilots: “Lord of the tempered wind, control their minds with instinct fit. Uphold them with your saving grace. Oh God protect all those who fly, through lovely waves beneath the sky. God bless you and thank you for being here.” 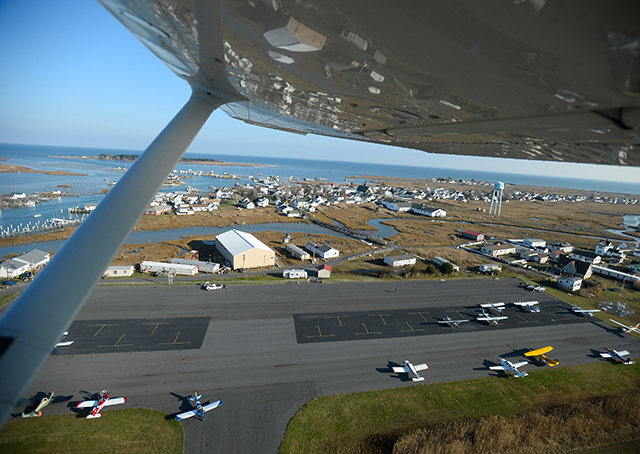