Schools vie to be first at TBO 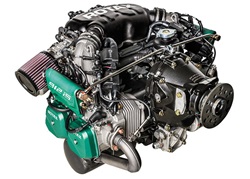 A new Rotax 912 iS Sport engine is again being offered as the prize for the first flight school to log 2,000 hours time between overhauls (TBO) on that engine. The contest announced Feb. 5 by Rotax BRP is a continuation of a 2014 contest won by a flight school in South Africa.

Flight schools register through an authorized distributor or Rotax representative, and notify the distributor when various flight hour benchmarks are reached. A copy of the logbook serves as verification of 2,000 hours flown, at which point the distributor informs BRP (Bombardier Recreational Products Inc.) and ships the engine. The first contestant to inform and verify reaching the 2,000-hour mark with their distributor will receive a new 912 iS Sport engine.

Rotax announced that former winners are not eligible, meaning that the first winner—Madiba Bay School of Flight in Port Elizabeth, South Africa, which logs at least 400 hours each month—will be out of the running.

Rotax announced the 912 iS Sport at Sun ’n Fun in 2014, touting improved performance with the tag line, “Stronger. Faster. Higher.” The fuel-injected 912 iS Sport also increases fuel efficiency by 30 percent over the carbureted 912 ULS.