A proposal to remember 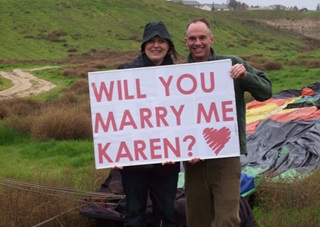 On Valentine's Day a few years ago, we met our passengers for the balloon ride in Temecula, California, but a light rain started. We canceled the balloon flight. One of the passengers, a Marine Corps helicopter pilot from Camp Pendleton, took me aside and told me he really needed to do this flight. He was planning to propose that morning, have a civil marriage that afternoon, and report to be shipped out to Afghanistan that night. He wanted to make sure his girlfriend received his benefits if something should happen to him overseas.

The Marine had his shipmate buddies standing by in another car with a "Will you marry me?" sign that they were going to display from the ground as the balloon flew overhead. Being a helicopter pilot, he knew it was perfectly legal for me to fly a balloon in the rain and begged me to do a short flight just to make the proposal happen.

We support our servicemen so I decided to help. I agreed to do a short flight where we would take off and fly with the wind across an orchard. His buddies would wait on the opposite side of the orchard and display the "Will you marry me?" sign as the balloon flew by overhead. We would immediately land at the next field with the mission accomplished. Well, that was the plan.

We pulled out the envelope in the rain, the fabric getting wet and heavy. As the balloon slowly inflated, the intensity of the rain increased and it sounded like 1,000 drummers playing out of sync. We put heat into the balloon, and it stood up almost 10 stories tall in the rain. The sound of the rain against the envelope was deafening, only out matched in noise when I squeezed the burner handle to put more heat into the balloon. The envelope steamed because of the hot, dry air inside drying the wet fabric.

Inside the basket, we were warm and dry but unable to hear each other due to the noise of the beating rain. A clear sheet of rain water poured down around the outside of the basket, making everything look like a Monet painting.

We took off expecting to fly toward and over the orchard, but as the rain increased, the wind shifted. We were going the wrong way. I kept the balloon climbing to try to find a wind headed toward the orchard and the Marines waiting with the "Will you marry me?" sign.

Suddenly, all the noise stopped. We all immediately looked up in fear thinking something terrible had happened to the balloon. Everything inside the envelope was OK, so we looked outside. The balloon had climbed so high that the rain turned to snow. The Marine helicopter pilot took one look around and then immediately dropped to his knee and proposed—in a hot air balloon with snow all around us in Southern California.

We landed shortly after, back in the rain, right where we took off. We never did see the "Will you marry me?" sign on the ground.

It was surprisingly and unexpectedly one of the most romantic moments I have ever witnessed.

Denni Barrett is owner of Magical Adventure Balloon Rides based in California.