Get the app Get the app
Already a member? Please login below for an enhanced experience. Not a member? Join today
News & Media Brent Taylor to lead Antique Airplane Association 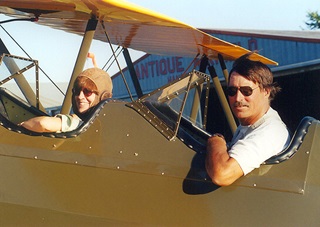 The Antique Airplane Association, a Blakesburg, Iowa-based group with a mission to "keep the antiques flying," has named its veteran executive director, Brent Taylor, its new president.

Taylor took over the leadership post Jan. 1 from his father, Robert L. Taylor, who was among the founding members of the Antique Airplane Association in 1953, and led it until his son became his successor.

Robert informed the organization’s board of directors of his plans to step aside at the board’s November 2014 meeting. He will retain the title of chairman emeritus of the Antique Airplane Association, and remain active with selected projects, Brent said in a phone interview from Blakesburg’s Antique Airfield.

The new president, a pilot and aviation mechanic, stressed the continuity theme as he discussed the organization’s future direction, noting that he had "worked there a good part of my life" and had been engaged with the group full time since 1993.

"Dad and I both live on the place," he added.

In his first week as president, Brent said he already faced a full plate of tasks ranging from preparing for the first organization functions of the year to studying a new FAA policy addressing a priority issue for the association: how the agency manages surrendered, abandoned, and historical aircraft type certificates.

For more than a decade the Antique Airplane Association and some of its individual members had challenged—and litigated—blanket refusals by the FAA to make available information critical to aircraft restorers, especially antique aircraft design drawings.

The FAA issued its order, which becomes effective on Feb. 2, to comply with provisions included in the FAA Modernization and Reform Act of 2012, authorizing the release of type certificate data to third parties, and defining what must be released.

Having "taken the FAA to the woodshed" on the issue by litigating the access question under the Freedom of Information Act, he said, he had a mixed reaction, so far, to the policy based on a preliminary perusal of the 37-page document.

Also on the new president’s do-list was the development of "a couple of funding streams" for the Airpower Museum, also based at Antique Airfield. The affiliated museum, a nonprofit organization since 1965, offers displays of antique aircraft and storage of "tons of many spare engine and aircraft parts" that are available to assist association members with restorations, according to the museum’s website.

Taylor said he was working with local members on re-establishing a chapter of the Antique Airplane Association at the municipal airport in Casa Grande, Arizona, where the 57th annual Cactus Antique Fly-In will be March 6 and 7.

As an event early on the year’s calendar of aviation activities, the regional fly-in "is always a good bellwether of what’s going to happen the rest of the year," he said.

At an upcoming work day at Blakesburg, Brent expected informal discussions during an "ad hoc planning session" to help set the direction for the association, for the museum, and for the annual invitational fly-in Sept. 2 through 7 at Antique Airfield. This year’s fly-in will feature Curtiss Robin and Stinson 108 aircraft.

And always, Taylor said, challenges awaiting his attention as president would include "trying to keep the doors open, helping to serve the members better," and "keeping the wolves from the door—that being the government."