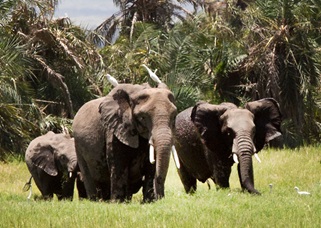 A conservation effort has begun to coalesce around aircraft weighing less than 50 pounds and guided by “big data,” in a high-tech response to an environmental crisis.

Illegal poaching, fueled by burgeoning demand for ivory threatens the existence of African elephants, a species that could be wiped out much sooner than was estimated by some as recently as 2014. Research that applied sophisticated statistical analysis to develop a more accurate picture of the extent of poaching across all of Africa, accounting for the entire continent rather than a limited number of sample locations, found that previous estimates may have underestimated the poaching toll by half. By these less optimistic estimates, 100,000 elephants were killed by poachers in three years. Rhinoceros populations face similar peril, and the wild populations are a fraction of the size.

Air Shepherd, a nonprofit organization created by the Charles A. and Anne Morrow Lindbergh Foundation, is not alone in the effort to supply Africa’s rangers and wildlife guardians with aerial solutions, though it has something that others do not—University of Maryland professor Thomas Snitch, and his invention: a tool to analyze data and predict where poachers will strike next.

Snitch developed this use of "big data" (an oft-used term for large-scale data collection and analysis), to find bombs in Iraq and Afghanistan before they harmed American troops—and to also track down those who planted the devices. High above war-torn countries, unmanned aerial vehicles were guided to specific locations by analysis of past events, terrain, population distribution, the movement of friendly forces being targeted, and other data that reveal predictable patterns in the attacks. Snitch and his team crunched all that and calculated where the enemy was most likely to strike next, then focused the friendly reconnaissance there. They were soon watching improvised explosive devices (IEDs) being planted.

“We ran the tape backwards,” Snitch said. (The sophisticated military UAS are capable of monitoring a large area at once.) “We can walk him back to the building he came out of.”

Snitch quickly realized that the same approach, with a few tactical adjustments, could work just as well finding poachers—even before they make their kills.

“That was the genesis of this work,” Snitch said. 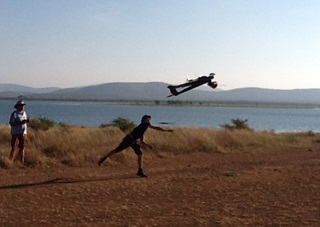 Lindbergh Foundation Chairman John Petersen has been working behind the scenes to enlist high-profile celebrity support for the Air Shepherd campaign, which seeks donations and to replicate what Snitch and his team have accomplished on a thus-far limited basis in South Africa. The pitch is simple enough:

“They have flown over 350 missions,” Petersen said, referring to three years of small-scale operations by Snitch and local operators in South Africa, and “not one rhino has been killed at any time and place they’ve been flying. We know that it works.”

Snitch said “probabilistic risk assessment” (a term he prefers to “predictive”) allows rangers to use much smaller, simpler, and less expensive unmanned aircraft, covering a smaller geographic area pinpointed by past poaching patterns. Small-scale operations on private reserves in the past three years have put various aircraft models to the test, and the Talon 120 by UAV Solutions (a Maryland firm) offers an ideal combination of capabilities and simplicity. It can be launched by hand, carry two pounds of cameras (for both day and night use), and fly for up to two hours on a charge.

“The key parameter is not how far, how high, or how fast the UAS can fly, but how fast the rangers can be moved into position,” Snitch said.

Getting them into position is the work of the computer model, which “learns” as more data is fed. As a heuristic, or “self-teaching” model, the program narrows the search for poachers as more information is provided. It analyzes a combination of terrain, past poaching locations and times, animal movements documented by rangers, and related data including lunar cycles. (Most animals are killed within a day before or after the full moon because poachers can carry the tusks away by moonlight without using lights that might give them away.) Narrowing the search area dramatically allows rangers to use smaller aircraft that make more practical sense for operating in the bush. 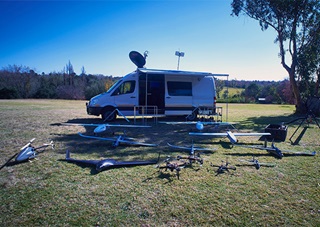 Air Shepherd, following successful trials in South Africa, has secured government approvals to operate on a larger scale. The organization is also pursuing approval in Kenya, and hopes to deploy the computer model and miniature aircraft across the continent.

The unmanned systems were initially greeted with suspicion by African rangers, Snitch said. The government agents tasked with protecting wildlife were concerned the small aircraft would replace them. The benefits soon became obvious enough to win them over: “We will see if there’s anyone hiding in the bushes waiting to kill you.”

Snitch said the same technology has other potential applications, including search and rescue. The same technology could also boost the tourism, which so many countries depend on to finance government operations including conservation. Snitch said it’s not a stretch to imagine future safaris directed by heuristic models to prime viewing locations, with the entire adventure captured by high-definition cameras flying silently above. Spotting fires, and enhancing the security of tourist caravans with reconnaissance are among a host of other potential applications. Timber and other natural resources around the world could be protected from illegal activity in similar fashion.

First, though, there is the increasingly urgent task of protecting the wildlife which draws so many of the tourists, elephants and rhinoceros in particular. 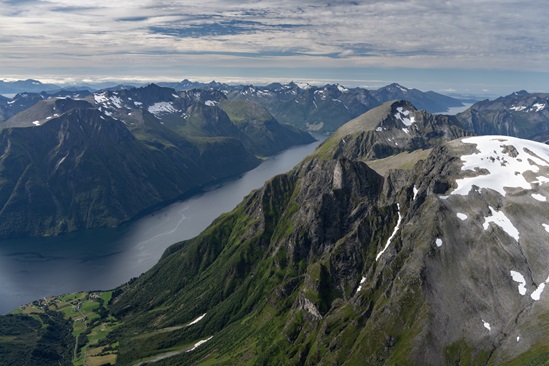