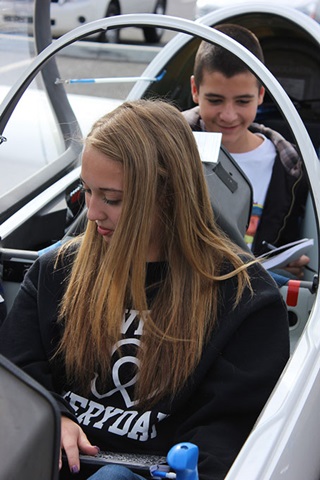 It is aeronautics month at Santa Clarita Valley International Charter School, and that means plenty of science, engineering, math, and even (aviation) history in the classrooms of this relatively young school situated in a shopping mall north of Los Angles. Outside in the parking lot on Jan. 26, a Glaser-Dirks DG-505 glider drew a crowd, with many curious onlookers watching as students took turns getting an up-close look at the aircraft they will soon fly themselves.

“Wait, what? Flying an aircraft?” reads a recent letter home to parents, followed immediately by an underlined “Yes.”

It appears nearly inevitable that new pilots will be among the fruit borne of a homegrown collaboration among educators and between two schools: the K-12 charter school and the Southern California Soaring Academy located about 50 miles east, in the heart of a region steeped in the tradition of aviation pioneers past, present, and future. The charter school, the soaring school, the Mojave Air & Space Port, and Edwards Air Force Base all sit within a roughly triangular area of desert and mountain, none of these more than 50 miles from any of the others.

The Southern California Soaring Academy is a registered nonprofit organization based at a private airport, offering flight experience programs for military veterans, and, more recently, area youth. Many of the staff work for the likes of Scaled Composites and other aerospace giants operating in the area. The charter school in Santa Clarita will be the second that sends its students soaring.

“We have several 14- [and] 15-year-olds soloing with us,” said Julie Bennett, half of the husband-wife team that manages Southern California Soaring Academy. The glider school averages 25 to 30 checkrides a year, and roughly as many solos. Instructors have lately honed classroom presentations that cover essential math and science concepts in an aeronautical context. With teens looking forward to the prospect of applying their theoretical knowledge high overhead, they are attentive both in classrooms, and outside the school where the glider was set up Jan. 26.

“It was massive and huge, and the kids just got excited and stoked,” said Dustin Lengning, known to students as Mr. L. He is also among those stoked, thanks in no small part to his own first taste of soaring with the Southern California Soaring Academy, which recently gave Lengning and other faculty members their first soaring experience. “We had close to 1,000 people come and check out the glider.”

While many of those people were students, the school is situated in a mall, and Lengning said the aviation bug, and the glider bug in particular, may well spread beyond the school walls.

“It was great for the community to see what we had going on as well,” Lengning said.

Lengning said that with a couple of exceptions, even those parents who were at first reluctant to entrust their children to a glider CFI and soar high above the ground—which will be the culmination of aeronautical month—have now embraced the plan.

“I reassured them early that it’s extremely safe,” Lengning  said, noting that gliders excel at, well, gliding, and give the pilot many options when it comes to landing. “The last thing I would want to do is put their kids in harm’s way.”

School leadership was also quick to sign on, particularly as the teaching team found ways to tie in to the state-mandated science and math standards, adding aviation history to the mix for good measure.

“Luckily for me, I work at a pretty progressive school,” Lengning said. “All of the stakeholders were on board early on.”

Bennett said the Southern California Soaring Academy hopes to forge similar collaborations with other schools, and expects the upcoming flights with the eighth graders from Santa Clarita Valley will produce similar results to the first such program, which prompted some surprising results: Students wrote about being afraid of the flight itself, beforehand, and overcoming that fear. 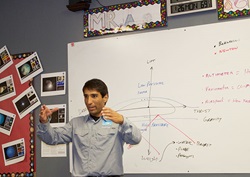 AOPA has prepared resources for pilots interested in inspiring youth and nonpilot educators looking for ways to bring science, technology, engineering, and math to life in the classroom. The Pilots and Teachers Handbook is designed to help transform enthusiasm into useful education, with guidance specific to both audiences. Is available at no cost, along with a variety of publications detailing presentations for specific age groups.