Get the app Get the app
AOPA will be closing at 1:45pm ET on Tuesday, December 6th. We will reopen Wednesday morning at 8:30am ET.
AOPA Members DO more LEARN more SAVE more - Get MORE out of being a pilot - CLICK HERE
News & Media Drone pilots sought 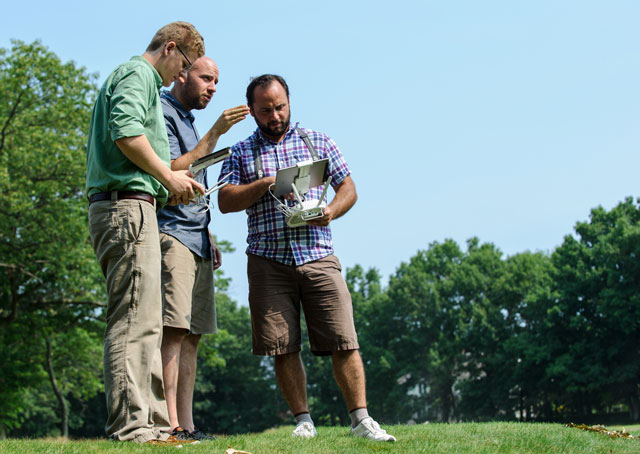 The drone business is poised to boom, and a Boston-area online startup is signing up pilots to work as independent contractors under a single exemption. For now, only those with a pilot’s certificate are being accepted for their list.

Founded by Adam Kersnowski and Dmitry Sharshunskiy, fly4.me is among more than 500 operators granted an exemption from rules prohibiting commercial use of unmanned aircraft since January (only a dozen exemptions had been granted by the end of 2014). Sharshunskiy, in a telephone interview, said many details are still being finalized, including particulars of the company training program that will be implemented for operators, and the pricing structure. The new firm hopes to develop a nationwide network of pilots capable of filling a variety of missions requested by customers, ranging from wedding videography to roof inspections and mapping and other missions.

“We want to show the public this is a tool and not a toy,” said Sharshunskiy, adding that property management, solar power, and inspection firms have expressed interest in the service. A prototype (beta) version of the Web-based matching service went live in June. “This is certainly in no way just for photography or videography …the response has been incredible. I couldn’t be happier.”

Sharshunskiy said safety is the top priority, and the standardized training being developed for certificated pilots who lack experience with unmanned operations will most likely span three days and include a practical test to “make sure that the pilot can perform specific flight tasks.” Pilots who have experience with unmanned aircraft, and their own equipment, may be approved to take jobs without additional training, subject to verification of qualifications, under the terms of the Section 333 exemption granted by the FAA in April.

Individual pilots have the option of applying individually for their own exemption. Illinois pilot Drew Wilkens is also among the fast-growing crowd securing a 333 exemption to operate drones for hire, launching his own business after landing the FAA approval in May. Sharshunskiy’s company has been granted an approval allowing any number of pilots verified by the firm to operate unmanned aircraft for clients, with matches to be made through the website.

Sharshunskiy said the company will provide video production support for pilots who lack experience editing video, or the desire to complete that time-consuming task.

“We’re still working on a pricing structure for that,” Sharshunskiy said, noting that the company hopes to have pricing and training details finalized by late summer.

Unlike airborne piloting for hire, flying an unmanned system for hire does not require a commercial certificate. A sport pilot certificate with a valid driver’s license, or higher certificate with a valid medical certificate, are sufficient under terms of the company’s exemption. Sharshunskiy said that while more than 250 would-be pilots have registered through the website to date, only about 15 hold the requisite certifications. Response from potential customers has meanwhile been strong, with several potential jobs posted.

Each pilot will have a profile page viewable by customers searching for pilots on the website, listing experience and qualifications along with work samples and customer feedback. Based on feedback from potential pilots and customers, “we will be introducing more of a standardized or a structured price option,” Sharshunskiy said.

The business is launching as regulators are struggling to catch up with the technology that has made low-cost, camera-toting drones widely available, and Sharshunskiy said the company will have high standards and clear operational procedures to prevent potential conflicts with manned aircraft (which have been increasing in recent months). The company working with a training consultant to develop the program, and will adhere strictly to requirements including line-of-sight control of drones at all times.

“We want to get this right,” Sharshunskiy said.