Get the app Get the app
Already a member? Please login below for an enhanced experience. Not a member? Join today
News & Media Mobile FliteDeck VFR 2.1 introduced

Pilots using Jeppesen’s Mobile FliteDeck VFR navigation software on their iPads should be on the lookout for a pair of significant enhancements in the newly released version 2.1 for iOS.

The upgrades, announced at Sun 'n Fun, include an automatic time-logging function as well as audio alerts that trigger when VFR pilots are within five minutes of reaching controlled or restricted airspace. Audio warnings in the new release are paired with distinct visual airspace warnings indicated on the map. Pilots will hear a “ping” sound and the spoken word “airspace” as a signal to be on the lookout for approaching controlled or restricted airspace. Pilots may also view visual warnings and highlighted airspace outlines using the “Go Flying” command if they are already flying within the airspace. 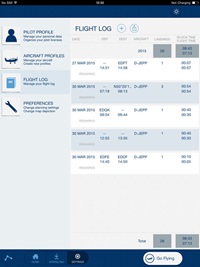 The aviation navigation company has partnered with audio giant Sennheiser for seamless integration with Sennheiser’s S1 digital headset and its sound prioritization features, according to a press release. The system will also work with other headset manufacturers' components via a hardwire connection, the release said.

Mobile FliteDeck VFR allows pilots to zoom in on aeronautical charts which transition to detailed airport diagrams so they don’t have to toggle between two different types of charts, according to Jeppesen’s website. The automatic flight time-logging capability begins after a route has been entered into the system and is then available for pilots to review, manage, and update.

The company offers a 30-day free trial for the app, which is available for a $49 annual subscription.