Get the app Get the app
AOPA Members DO more LEARN more SAVE more - Get MORE out of being a pilot - CLICK HERE
News & Media 'Freakin' awesome!' 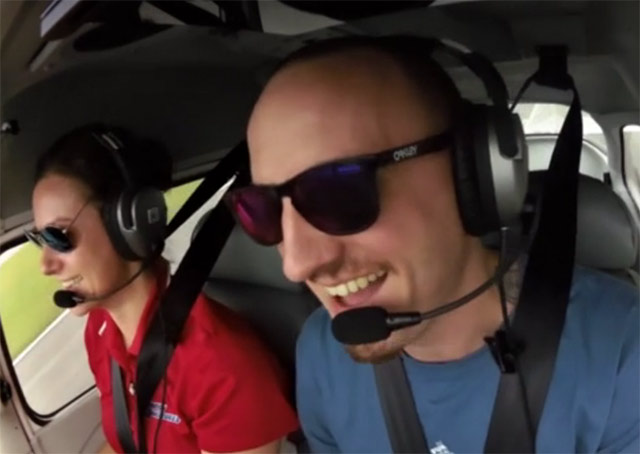 What can make a former Navy corpsman and a Harley-Davidson engineer giggle with pure joy? Their first takeoff.

Watch as Nik Oekerman, who served two tours in Iraq; Chris Graves, who worked on Harley-Davidson’s electric LiveWire motorcycle prototype; and Sherry Rosenkranz, a global advertising executive for GM, hop in the left seat for the first time and experience the thrill of flight through the One Week Ready to Solo project.

The faster the RedHawk, a refurbished diesel-powered Cessna 172, accelerates down the runway at Plant City Airport in Plant City, Florida, the more Graves giggles, speechless from laughter well into the climbout.

“Wooo!” Oekerman exclaims as he prepares to rotate for liftoff, once airborne adding, “Oh man, this is freakin’ awesome!”

You can watch Oekerman, Graves, and Rosenkranz experience the thrill of flight, learn the fundamentals of aviation, and progress right up to the point they would be ready to solo. (On Graves’ last flight with his instructor, she covers her mouth with tape just to show he doesn’t need any help inside the cockpit.) AOPA had cameras rolling for the entire process—inside and outside the aircraft and on the ground—to capture the joys of learning to fly as the students worked toward being ready to solo. The association has created five webisodes, each less than 20 minutes, that will be released on AOPA’s YouTube channel and via social media, putting viewers in the left seat with the students. (The first two webisodes are live now.)

“It feels awesome! Wow,” Rosenkranz says during her first lesson.

The project was a joint effort between Redbird Flight Simulations and AOPA to show how accessible learning to fly can be. The three students had no flight experience when they arrived in Florida during Sun ‘n Fun week in April. During eight days of intense simulator and flight training, the students progressed to the point where they were able to make unassisted takeoffs and landings. They trained in two RedHawks and flight simulators provided by Redbird.

“The energy and excitement from each of the new pilots is infectious,” AOPA Chief Marketing Officer Jiri Marousek says. Just watch Graves try to cut streams of toilet paper in the air with the RedHawk’s propeller.

In addition to giving the three prospective pilots a jump start on their flight training through the intense week at Sun ‘n Fun, AOPA and Redbird wanted to show the public that learning to fly is more feasible than they might think.

“We hope that sharing the journey of these three student pilots encourages those dreaming about becoming a pilot to see how possible it really is,” says Redbird Vice President of Sales and Marketing Charlie Gregoire.

The program certainly worked on these three students.

“That was amazing,” Oekerman says as he climbs out of the RedHawk after his first lesson. “I want to go back up right now.”

Graves and Rosenkranz caught the aviation bug and have continued flight training in their hometowns. Oekerman has put flight training on pause to pursue his acting career, but he has stayed involved in aviation. He rode along on the Arsenal of Democracy: World War II Victory Capitol Flyover in May and has taken a glider lesson.

The remaining three webisodes will be released later in the week during EAA AirVenture and into the following week. Make sure you catch all five and share them with a friend who’s dreaming of learning to fly—you just might relive your early training days and help launch someone else’s journey.