Get the app Get the app
Already a member? Please login below for an enhanced experience. Not a member? Join today
News & Media Approach gone wrong 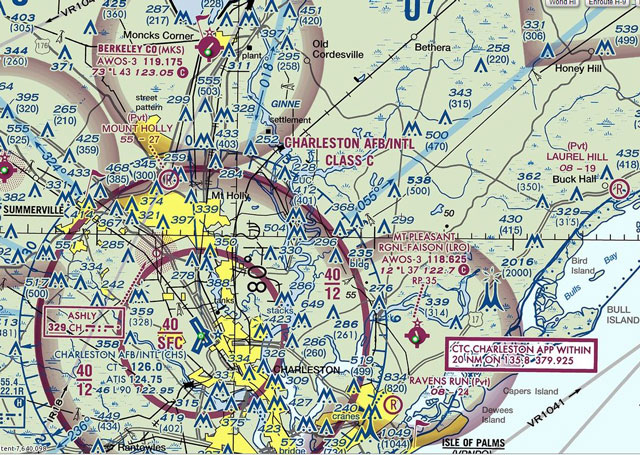 The NTSB has released an unusually detailed preliminary report of the accident that brings the circumstances into focus, though the investigation will take months to complete. The collision destroyed the Cessna in flight, killing pilot Joseph Johnson and his father, Michael Johnson, who had just departed on a flight to Myrtle Beach. U.S. Air Force Maj. Aaron Johnson flew his damaged F-16 for three minutes after the collision before ejecting safely.

According to the NTSB account (which remeains preliminary, and subject to revision), Johnson completed two practice approaches at Myrtle Beach before heading southwest to Charleston Air Force Base/International Airport for another practice approach to Charleston’s Runway 15. Approaching Charleston just before 11 a.m., the F-16 pilot was advised fly 260 degrees to intercept the final approach. Five minutes before the deadly encounter, controllers instructed Johnson to descend from 6,000 to 1,600 feet.

Less than three minutes passed before Charleston controllers spotted the first radar signature of the Cessna departing Berkeley County Airport’s Runway 23, about 16 nautical miles north and outside of Charleston’s Class C airspace. The Cessna tracked southeast for about three minutes, climbing. The Cessna was bound for Myrtle Beach.

Just after 11 a.m., controllers advised the F-16 pilot of traffic at 12 o’clock, two miles, traveling in the opposite direction. Johnson replied that he was “looking,” the NTSB report states. Eight seconds later, the controller advised the F-16 to “turn left heading 180 if you don’t have that traffic in sight.” The fighter pilot responded by asking controllers to confirm the distance, the NTSB reported. The F-16 began turning south.

Radar data showed the F-16 within a half-mile of the Cessna about 20 seconds later, heading 215 degrees at 1,500 feet. The Cessna’s transponder reported an altitude of 1,400 feet, having turned to a course of 110 degrees. The controller advised the F-16, “traffic passing below you at 1,400 feet,” two seconds before the radar track of the Cessna disappeared. The F-16 transmitted a distress call 25 seconds later, the final transmission from either flight.

Details of the wreckage condition and location reported by the NTSB were consistent with witness statements reported by the media soon after the July 7 crash. People watching from the ground saw the F-16 strike the Cessna 150 broadside.

Air Safety Institute Senior Vice President George Perry noted at the time that collisions between military and civilian aircraft are extremely rare, and general aviation pilots can benefit from both long-established procedures such as flight following and new technology such as Automatic Dependent Surveillance-Broadcast receivers to increase their situational awareness. He also renewed a call to the FAA to make ADS-B traffic information available to pilots of aircraft not broadcasting ADS-B Out.