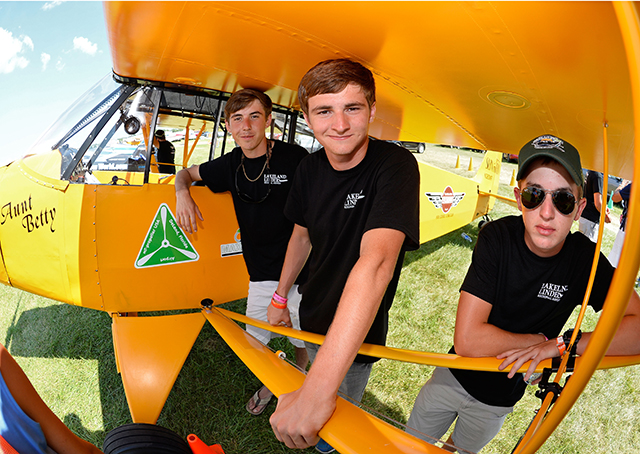 As warbirds thundered across the sky above him, Lakeland AeroClub member Phillip Herrington, 20, hustled to the EAA AirVenture flight line to prepare for his role in the daily airshow from the front seat of a Piper PA-18 Super Cub.

“You know the movie Top Gun? It was on TV when I was five-years-old and when I saw it I just got goose bumps all over,” said Herrington. “I knew I was going to be Maverick all along,” he said while preparing to fly a demonstration flight in the Super Cub that several of his fellow AeroClub members at Central Florida Aerospace Academy high school rebuilt as a group project.

“Oh yeah, they made some mistakes along the way. I think they had the engine on and off three times until they got it right,” said AeroClub Director Michael Zidziunas. The young aviators are mostly still in high school and their ages range from 16 to 20. A few, including Herrington, who is now a newly minted CFII and no longer a teenager, are headed for college before setting their sights on corporate aviation careers.

Cole Harris, 18, said the valuable hands-on experience of the project was the best teacher. Harris, who earned his private pilot certificate during classes, is now interning at an aircraft engineering firm.

But before Herrington, Harris, Zidziunas, and their fellow Lakeland AeroClub members could participate in events at Oshkosh, they first had to get to Wittman Regional Airport. The journey of two small Pipers and three Cessnas took four days, including one day set aside strictly for taking in the scenery while helping Boy Scouts with their aviation badges in Tennessee. 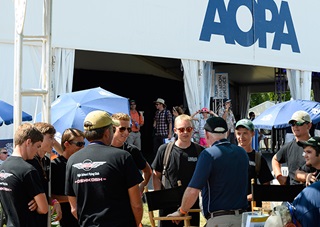 “It’s a sightseeing trip for most of these guys, it’s just a great way to see this country,” said Zidziunas. Weather considerations caused the group to leave a day earlier than planned to avoid afternoon thunderstorms along the way. “We pre-planned for the weather but since this is the group’s third trip to AirVenture, we already have a lot of hours waiting in FBOs,” Zidziunas said.

While most of the AeroClub’s nonpilot friends went to proms and football games, they were studying for their private pilot certificates and logging flight time at the specialty high school on the grounds of Lakeland Linder Regional Airport. When Herrington graduated he was already a private pilot with almost 300 hours, including more than 100 hours of formation flight mostly beside his best friend, Angel Castellanos.

“When we flew up here the first time, we flew as a close formation, and I mean a very close formation,” said Herrington, remembering how he and Castellanos traveled to Oshkosh, Wisconsin, in a pair of low-wing Breezer light sport aircraft. “And by close formation, I mean that we could jump from wing to wing.”

“You know the flip-flop guys, like Mike Goulian, Kirby Chambliss, and Patty Wagstaff? That’s me, I’m one of those guys,” Herrington said while walking to the yellow Piper.

“How cool is that?” said Zidziunas as he surveyed the scene. “A 20-year-old college kid getting to fly in the airshow at Oshkosh in the airplane he helped rebuild.”