Get the app Get the app
AOPA Members DO more LEARN more SAVE more - Get MORE out of being a pilot - CLICK HERE
News & Media Urgent action needed to support medical reform; ALPA actively opposed

Editor's note: AOPA refutes claims from the Air Line Pilots Association International and provides an update on the latest from Capitol Hill regarding third class medical certification. See the update. 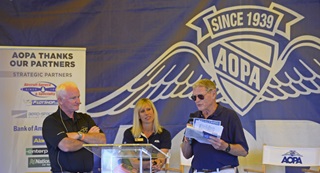 AOPA has compiled a list of senators who have not yet signed on as co-sponsors to the Pilot's Bill of Rights 2. Pilots can contact their senators here and urge them become a co-sponsor and support third class medical reform.

Baker told the audience that the initiative is a “top priority” and that he has been closely tracking the latest developments as they unfold. The legislation now has 55 co-sponsors in the Senate and 118 in the House. The number of Senate co-sponsors has more than doubled in recent days since AOPA sent a call to action encouraging members to contact their elected officials and ask them to co-sponsor the legislation.

Supporters of third class medical reform have a unique, but narrow, window of opportunity when it comes to getting action before Congress leaves town July 31 for the August recess. Inhofe said the Senate bill is still shy of the magic number of 60 co-sponsors needed to bring the legislation to a vote and action from AOPA members could swing the numbers enough to keep the bill on the table.

“This legislation is critically important to GA pilots and we’re going to do everything in our power to make sure it happens,” Baker said following the event. “We appreciate Senator Inhofe’s bold leadership on issues affecting the general aviation community. As a pilot himself, Senator Inhofe truly understands how vital medical reform is to growing and strengthening GA. Now we, as AOPA members, need to mobilize immediately to keep this legislation moving forward.”

At the same time, AOPA and general aviation supporters in Congress are pursuing every possible avenue to get medical reform. Earlier this week, Sens. Joe Manchin (D-W.Va.) and John Boozman (R-Ark.) filed an amendment that would add third class medical reform language to the highway bill now being debated in the Senate.

For the amendment, too, time is of the essence. The current authority for highway funding expires at the end of the month, leaving the Senate just a few days to pass its own legislation and reach agreement with the House. Previously the House passed legislation to extend highway funding until December, but the Senate is proposing a much longer term of up to six years.

“We’ve got a real fight on our hands to get medical reform legislation included in the final highway bill,” said Baker. “Time is short. That’s why we need members to call their senators immediately and ask them to support the Manchin-Boozman amendment.”

On July 24, a group of aviation associations led by AOPA sent a letter to Senate leaders expressing their strong support for the Manchin-Boozman amendment.

But the amendment also faces some surprising opposition, particularly from the Air Line Pilots Association International, which has raised objections to the Manchin-Boozman amendment and the proposed medical reforms for some GA pilots.

“Getting third class medical reform won’t be easy, but we are determined to do everything we can to make it happen,” Baker said. “We’ve got to keep the momentum going, and your voice can make a real difference. Even if you’ve contacted your elected officials before, get in touch again and let them know that third class medical reform and the Pilots Bill of Rights 2 are important to you.”