Get the app Get the app
Get the latest news on coronavirus impacts on general aviation, including what AOPA is doing to protect GA, event cancellations, advice for pilots to protect themselves, and more. Read More
Already a member? Please login below for an enhanced experience. Not a member? Join today
News & Media FAA makes UAS moves

Editor's note: This article was updated Sept. 3 with word from the FAA that the beta version of the B4UFLY app has been pushed to users. 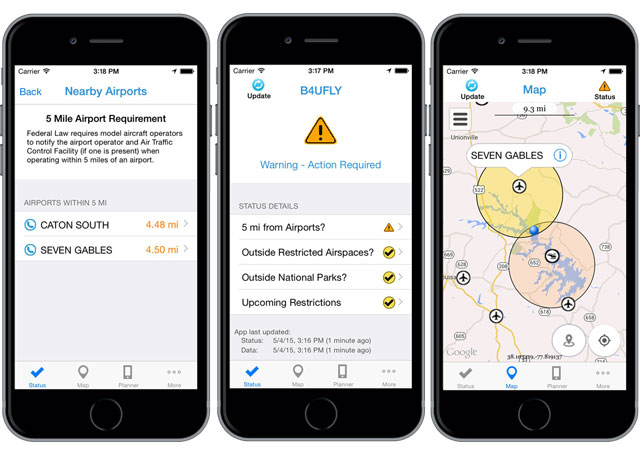 The FAA has created a new app for unmanned aircraft systems operators with smartphones that shows them if a planned flight is legal, and also announced May 6 new industry partnerships to expand commercial UAS use.

The mobile device software dubbed B4UFLY was demonstrated at the Association for Unmanned Vehicle Systems International Unmanned Systems 2015 conference in Atlanta, and will be tested for several months before its initial public release. The FAA announced Aug. 28 that a beta test involving 1,000 or more registered users has begun. The app is designed, FAA officials said, to complement the Know Before You Fly education campaign, which targets recreational users of unmanned systems in an effort to encourage safe and legal use of their unmanned aircraft.

Commercial operators including CNN, PrecisionHawk, and BNSF Railroad have each partnered with the FAA to focus on developing unmanned commercial operations beyond the operations covered by a proposed rule issued in February. CNN will work with FAA staff to evaluate how unmanned aircraft can be used for news gathering in urban areas; PrecisionHawk will work with FAA staff to demonstrate capability to operate unmanned aircraft for crop monitoring and related agricultural applications beyond the pilot’s sight; and BNSF Railroad will explore command and control challenges of using unmanned aircraft to monitor the rail infrastructure.

“Even as we pursue our current rulemaking effort for small unmanned aircraft, we must continue to actively look for future ways to expand non-recreational UAS uses,” said FAA Administrator Michael Huerta in a news release. “This new initiative involving three leading U.S. companies will help us anticipate and address the needs of the evolving UAS industry.”

AOPA has been actively engaged on the unmanned aircraft issue for several years, and long advocated that unmanned systems need to be able to “see and avoid” other aircraft to safely integrate in the National Airspace System. AOPA participated in the FAA’s Small Unmanned Aircraft Systems (UAS) Aviation Rulemaking Committee starting in 2008; more recently, AOPA President Mark Baker urged lawmakers to press the FAA to create rules that will help ensure the safety of pilots and passengers, with nearly 200 pilots having reported unmanned aircraft encounters. AOPA, in formal comments submitted in April, urged the FAA to revise the proposed rules in the interest of safety.

The FAA has collected its most recent announcements and other information related to unmanned aircraft online, including the May 6 announcements which noted that nearly 4,500 comments were filed on the proposed regulation of small, unmanned systems; the agency must address each comment before it can proceed.

The AOPA Air Safety Institute meanwhile offers a free online course, Unmanned Aircraft and the National Airspace System, to educate pilots on the different types of UAS and how to safely coexist.