Get the app Get the app
Get the latest news on coronavirus impacts on general aviation, including what AOPA is doing to protect GA, event cancellations, advice for pilots to protect themselves, and more. Read More
Already a member? Please login below for an enhanced experience. Not a member? Join today
News & Videos Many instrument approaches spared elimination 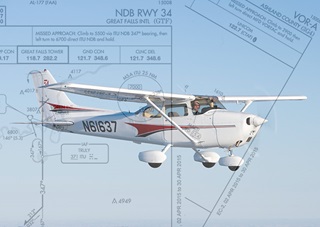 The FAA has significantly reduced the number of standard instrument approach procedures it proposed eliminating this spring from 736 to 334, citing public comments and the need for further review. Some of the spared approaches may be subject to scrutiny again later, the agency said.

The list of procedures to be canceled was based on criteria set by an FAA working group that had the task of ensuring the existence of a scaled-back VOR network while the FAA puts the NextGen satellite-based navigation system in place. The FAA announced the list—which the pilot community had long been poised to inspect—in April, and solicited public comments on it through May 28.

In a final rule published in the Federal Register Nov.10, the FAA listed 191 procedures that do not meet criteria for elimination, “and are not included in this final rule; however the FAA may reevaluate these procedures at a later date.”

Another 198 procedures remained under review; 13 others had been included on the list erroneously.

As for the other 334 approaches, “the FAA has decided to proceed with cancellation of those procedures,” according to the final rule, which has an effective date of Dec. 10.

The FAA said it based its decisions on public comments and an internal review, noting that the 198 procedures that drew public comments “will be addressed in the future.”

No comments were received about the approaches that will be eliminated, the FAA said.

AOPA served on the working group to streamline the VOR network, and continues to be involved in the minimum operational network process—a key element in meeting a NextGen goal of reducing the number of system VORs from the 957 currently in place to 883 by the NextGen implementation date of Jan. 1, 2020, and to 649 by 2025.

“Public comments are very important to the process, and AOPA continues to ensure that the comments received are carefully considered by the FAA,” he said.

AOPA is also participating in drafting the next version of the Roadmap for Performance-Based Navigation, the FAA’s strategic initiative to implement more area navigation (RNAV) procedures.

“RNAV offers considerable benefits and increased capabilities for users, and the procedures are less costly for airports and the FAA to maintain,” Duke said, adding that availability of an RNAV or alternative procedure is considered when deciding whether to cancel other procedures.

Duke said the work to modernize the air traffic control system requires striking balance between the impact the removal of instrument approach procedures has on users, and budgetary constraints.

“The FAA cannot cost-effectively manage the existing navaid network and build the NextGen system at the same time,” he said.