Get the app Get the app
Already a member? Please login below for an enhanced experience. Not a member? Join today
News & Media Bob Hoover film wins Combs Gates Award 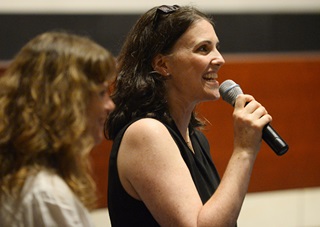 Kim Furst, the filmmaker who made Flying the Feathered Edge: The Bob Hoover Project, received a $20,000 Combs Gates Award from the National Aviation Hall of Fame presented by a group that included Hoover himself. Others making the presentation were National Aviation Hall of Fame enshrinement director Ron Kaplan and trustee Phil Roberts, and enshrinees Alan Klapmeier, Clay Lacy, Russ Meyer, Dick Rutan, and Sean D. Tucker. Lacy, Rutan, and Tucker appeared in the film.

The 86-minute documentary uses images, historic footage, and testimonials to tell Hoover’s life story. The film was released in 2014 and is available on DVD and Blu-Ray. Hoover began his career as a combat fighter pilot and test pilot who later amazed air show audiences with his flying ability.

Furst said she was “very moved” to win the award. “I’m grateful to Mr. Comb’s and the Gates family’s commitment to preserving, researching, and promoting our nation’s extraordinary air and space history.”

The Combs Award, its original title, grew out of a $1.3 million donation to the National Aviation Hall of Fame by the late Harry Combs to preserve aviation history. Combs was a 1996 enshrinee of the Hall of Fame. The award was presented at the National Business Aviation Association convention in Las Vegas. The late Charles C. Gates was a partner with Combs in the Combs Gates FBO chain. The name of the award was changed seven years ago to reflect the multi-year commitment by the Gates Frontiers Fund to fund the award.