Get the app Get the app
Already a member? Please login below for an enhanced experience. Not a member? Join today
News & Media Long days on Long Wings

Editor's note: This story has been updated to correct an error regarding the origin of the WB-57. As readers pointed out, this airplane was not originally designed for U.S. Air Force service, but rather for Britain’s Royal Air Force. AOPA regrets the error.
T

here is no such thing as a “routine” mission at 60,000 feet, but some aspects of the working life of NASA’s high altitude aviators might be surprisingly familiar to a general aviation pilot. To name one, they use ForeFlight. When it comes to the menu, however, there are probably few of us who will eagerly bust out a chilly tube of apple pie on the family Thanksgiving flight.

The nation’s aeronautics and space agency likes to point out from time to time that “aeronautics” comes before “space” in its name, and in its history. On Nov. 19, NASA invited media (including AOPA) to the Johnson Space Center in Houston to meet flight crews and witness the first formation flight including all three WB-57s in the fleet in at least 40 years.

It took a while to set that up, because these are busy aircraft. Missions range from sample collection to high-precision aerial photography to testing the technology of the future at high altitude. The WB-57 has much in common with its far more famous cousin, the U-2 (which NASA also operates as a high-altitude science platform, known as the ER-2), though it lacks a device to heat food onboard. Unlike U-2 crews, pilots and technicians endure hours aloft with no beef stew. Their menu is otherwise much the same. Their protective attire—pressure suits made by the David Clark Co. of Worcester, Massachusetts—is identical. And the WB-57, operated by the U.S. Air Force as a tactical bomber and reconnaissance aircraft in the 1950s, presents similar piloting challenges. 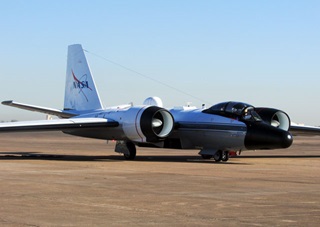 “Flying the WB-57 is like flying a big semi-truck on bicycle wheels,” NASA pilot Tom Ryan said during the Nov. 19 media briefing and demonstration. It is very easy to exceed the airframe speed limit, he added, and with 2,000 square feet of wing area, there is always plenty of lift from ground effect up to the edge of space. Keeping it on the ground is in some ways more challenging: There is only 18 inches of clearance below the wingtips during taxi, and the airplane always wants to fly. Much like the U-2/ER-2, it may require escort. Ground observers must follow the aircraft from ramp to runway to ensure clearance of taxi lights and airport signs when the WB-57 is operating from unfamiliar fields.

In an emergency, Flight Level 600 is a hostile place indeed. Pilots have learned the hard way that pitot static failure resulting in erroneous airspeed indication can lead to an accelerated stall in a simple turn, and recovery is challenging since there is no visual reference for movement at extreme altitude. Pilots compare the turbine twin to a 4-year-old child, always restless, wanting to do something. Keeping a watchful eye occupies much of the pilot’s time, even during long-duration missions above offshore hurricanes. Good conversation also goes a long way. The WB-57 crews overflew three hurricanes in 2015, including Patricia, the most powerful Pacific cyclone on record to make landfall. Even at 62,000 feet, they were not entirely above that massive storm, though turbulence was mercifully minimal.

The 60-year-old technology has been updated in some ways. The interchangeable nose can accommodate a broad range of sensors, including cameras able to hold a fixed point in focus with exquisite precision. Or an un-fixed point: WB-57 crews were the first to capture air-to-air images of the space shuttle in flight, a mission described by one of the crewmembers as photographing a speeding bullet from another speeding bullet. The camera has only a 1-degree field of view, and airplane and speeding spacecraft were about 50 miles apart.

The WB-57 has also photographed the International Space Station as the former flew high above the planet. Flying in the uppermost reaches of the atmosphere, crews can see the sky shift from blue to purple to black, and the curvature of the planet is discernible. The crew can see for hundreds of miles. At least the pilot does: The engines block much of the view for the technical specialist in back. 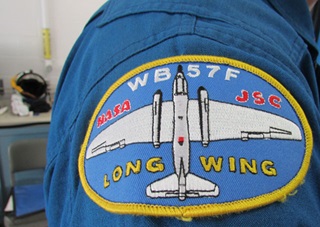 The WB-57 may be six decades old, but it has capabilities that modern unmanned aircraft cannot match, including the ability to adjust mission objectives in a few minutes. NASA controllers can re-task the crew in real time, which comes in handy particularly when flying over a hurricane, a mission that also requires coordination with other aircraft probing the same storm (such as the also-more-famous WP-3D Orions operated by the National Oceanic and Atmospheric Administration). The Global Hawk unmanned alternatives are not so flexible and responsive to changing needs, NASA noted: Their flight plans are programmed hours, often 36 hours, in advance.

Getting all of this done remains hard work for the pilots and technical specialists, whose workday stretches to 12 hours including missions of up to seven hours. Then there is the lengthy preflight preparation, and post-mission tasks. Suiting up can swallow an hour and a half alone, and crew members need help with that process. In flight, the suits inflate at 15,000 feet and instantly make simple tasks more cumbersome. That includes lunch, which is passed through the helmet via tube, originating in a metal container that is functionally identical to a toothpaste tube. Platt and other visitors were given a sampling of the high-altitude meals. The taste? Better than you might expect, but no substitute for a hot, fresh slice of apple pie.

The meals may lack taste and consistency, but they are packed with calories, since the pressure suit environment causes a lot of sweating and a lot of physiological exertion, even when sitting still (on a very uncomfortable seat) for hours on end.

So it’s a lot like flying GA: The crews use the same ForeFlight EFB that many AOPA pilots rely on, augmented by Jeppesen and military charts for international operations. They just spend a little longer in the airplane than most of us, fly a bit higher, and take photos that are somewhat more sophisticated than what a GoPro or cell phone can manage.

This story was reported and photographed by AOPA Central Southwest Regional Manager Yasmina Platt from Houston. 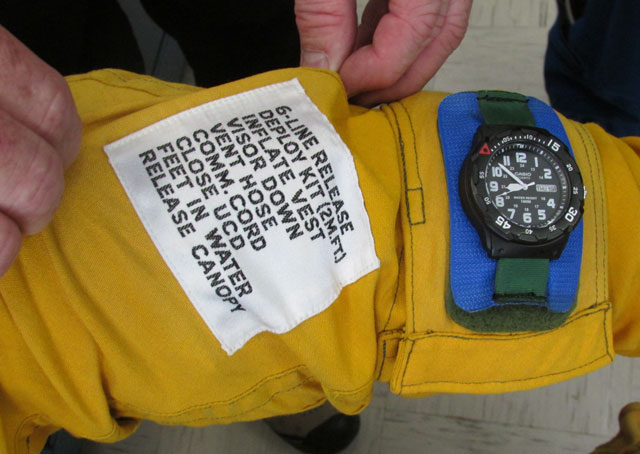 The travels of the three NASA WB-57s can sometimes be tracked via FlightAware.com, based on their N numbers: N926NA, N927NA, or N928NA.

Crews perform a wide range of scientific missions including high-precision photography, hurricane overflights, and atmospheric data collection. Learn more about this program on the NASA website.