Get the app Get the app
News & Media Drone action urged 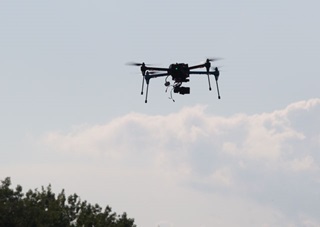 With a million drones expected in consumer hands by Christmas, a $1.9 million fine now sought by the FAA from one drone operator, and a growing mountain of sighting reports from pilots, members of a House committee with jurisdiction over civil aviation vented frustration and urged action during an Oct. 7 hearing.

Members of the House Transportation and Infrastructure Committee’s Subcommittee on Aviation also voiced concern about disrupting an unmanned aircraft industry that is already producing growing numbers of jobs and economic activity, with potential for much more.

“The key is balance, and I believe that this committee, as well as the FAA and stakeholders, continue to strive for just that,” Subcommittee Chairman Frank LoBiondo (R-N.J.) said in his opening. “The answers to these questions will be complex, though I am confident that our country can and will address them.”

One congressman suggested making drone misconduct a federal crime, subject to a year in jail and “significant” fines, though FAA Deputy Administrator Michael Whitaker said it has proved very difficult to find the perpetrators breaking rules and laws that are already on the books. Unlike laser pointers, Whitaker noted, drones are not visibly linked to their operator in a way that affected pilots can see, and report.

“One of the challenges with this issue is actually locating UAS operators,” Whitaker told the lawmakers. “You look at the pilot reports… they don’t tell us where the (drone) operator is.”

Rep. John Mica (R-Fla.) questioned Whitaker over the FAA failure to meet a deadline imposed by Congress in 2012 for a final rule regulating commercial operation of small unmanned aircraft. That deadline passed in September; Whitaker noted that more than 4,500 comments were received on the proposed rule, and the agency was working through those. (AOPA submitted comments in April, seeking some changes to a rule that the association described as a “good first step toward safe integration” of unmanned aircraft).

Whitaker told committee members that the agency should have the final rule drafted by the end of the year, and that additional review by the Department of Transportation and other entities would require another six months. The final rule should be in place by June 17, 2016.

He also told committee members that pilot reports of drone sightings continue to arrive at a rate of about 100 per month.

James Hubbard, deputy chief of state and private forestry for the U.S. Forest Service, described both the grounding of some firefighting efforts due to drone activity (21 such incursions so far this year, 12 of which halted initial firefighting operations, up from two such incursions in 2014), and the potential benefits including lives and property that might be saved if drones were part of the firefighting arsenal.

Rich Hanson, director of government and regulatory affairs for the Academy of Model Aeronautics, urged caution when assessing drone sightings reported by pilots. An AMA analysis of reports collected by the FAA from pilots, ground observers, and others (more than 1,000 have been collected to date) called into question how many of those reports represent an actual danger to aircraft.

“We found that the number of near misses appears to be in the dozens, not in the hundreds,” Hanson said, though he did not deny there is real risk.

The Oct. 7 hearing was held a day after the FAA demanded the largest civil penalty to date from a drone operator, a $1.9 million fine for violating FAA regulations with 65 unauthorized drone flights between March 21, 2012, and Dec. 15, 2014. The FAA has not provided details on how the flights were attributed to SkyPan International, a Chicago aerial photography provider that serves the real estate market, now accused of making 43 of those 65 flights in the New York Class B airspace. An agency spokesman said in an email Oct. 7 that a complaint had been received from a tethered balloon operator.

SkyPan issued a statement to AOPA, though it did not address the FAA allegations in detail:

“SkyPan has been conducting aerial photography above private property in urban areas for 27 years in full compliance with published FAA regulations. SkyPan is fully insured and proud of its impeccable record of protecting the public’s safety, security and privacy.”

FAA officials declined to elaborate further on how the basic facts of the alleged violations by SkyPan were established. An agency spokesperson said that the largest civil penalty previously proposed was $18,700 against a company called Xizmo, a penalty which the FAA sought Sept. 18. (The agency allows 30 days for a formal response.) The FAA has opened more than 20 enforcement cases in all, settling five, and proposing penalties in five others (now six, including SkyPan), a spokesperson said.

Whitaker said the FAA has investigated “several hundred” reports of drone violations, and vowed that “we won’t hesitate to take strong action,” but offered little clarity on how, exactly, the FAA can overcome the challenge of locating perpetrators.

“We announced today a new research partnership that goes just to that issue,” Whitaker said, referring to an agreement announced Oct. 7 with CACI International Inc. to evaluate how the company’s technology can track unmanned aircraft controllers through radio signals detected in the vicinity of airports. 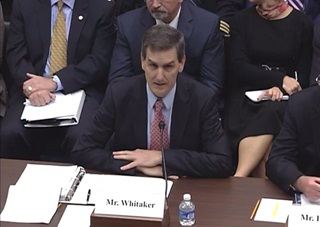 “We will assess the results of that technology as well as geofencing and some other technologies,” Whitaker said.

Whitaker fielded multiple questions about mandating drone registration that would allow operators to be located and held responsible if their drones break rules, and the deputy administrator said the agency is “digging into the technicalities of that.”

Other lawmakers suggested establishing criminal penalties including jail time for drone operators whose conduct endangers the flying public or disrupts firefighting. Rep. John Garamendi (D-Calif.) said he had drafted a bill that would impose jail time and fines for flying an unmanned aircraft near “a significant airport” or an active fire.

“That would immediately educate everybody involved,” Garamendi said.

What did Hubbard think of that, Garamendi asked the Forest Service deputy chief.

“I think we need some help of some kind,” Hubbard responded.

Garamendi was not alone predicting that disaster is a matter of when, not if.

“The incident’s going to happen,” Garamendi said. “Not sure it’s an accident. But the incident is going to happen. I think it’s time for us simply to lay down a marker and say if you re operating a UAS (unmanned aircraft systems) in these spaces, you are violating the law and subject to a severe penalty.”

Witnesses and members of the House subcommittee with jurisdiction over civil aviation agreed on Oct. 7 that consumer education is essential as the number of small drones in the country surges past 1 million later this year, or soon thereafter.

Rep. Todd Rokita (R-Ind.), an AOPA member and pilot who is also a member of the Aviation Subcommittee of the House Transportation and Infrastructure Committee that held the hearing, suggested that general aviation organizations could “work closely with drone operators” and help establish and encourage safe practices.

Rokita, one of those who are pressing for medical certification reform, pressed FAA Deputy Administrator Michael Whitaker to commit to reach out to GA groups.

“I agree that that is an important aspect of this,” Whitaker responded. “We usually work through AOPA and small airport associations.”

Rokita pressed Whitaker for a date certain to engage GA.

“I just want to get you on record when we can start moving to build partnerships where they make most sense,” Rokita said. “When can we do that by?”

Whitaker offered to “report back to you in 30 days on our plan to do that.”

Rokita replied that it was a simple matter of making a phone call, which Whitaker agreed to do in the “next four weeks.”

AOPA will be well-prepared for that call. The association has worked with the FAA and other stakeholders for several years on the issue of safe unmanned aircraft integration, and long maintained the primary importance of safety.

AOPA has testified before Congress urging expedited rulemaking, and consistently advocated (including formal comments on those proposed rules) that unmanned systems must be able to “see and avoid” other aircraft before being integrated in the National Airspace System.

AOPA also has joined the “Know Before You Fly” education campaign, collaborating with other industry groups and stakeholders in the effort to educate users about responsible operation.