Once the music starts, there is no stopping Rob Holland.

A master showman well-known on the U.S. airshow circuit, Holland accomplished an unprecedented feat on Aug. 29, winning the freestyle competition at the 2015 World Aerobatic Championships for the third time. It was also Holland’s third consecutive freestyle world title, and took some of the sting out of an otherwise disappointing 10 days for the U.S. team in Châteauroux, France.

“Rob is such a master of that flight that he just smokes everybody,” said International Aerobatic Club President Mike Heuer. (IAC sanctions aerobatic competition in the United States and selects the team that represents the country in international competition.)

The freestyle competition (also known in the United States as the four-minute free in reference to the length of the program) departs from classical competition aerobatics in a few ways. Rules are relaxed, and Aresti diagrams are dispensed with, allowing each pilot a truly free hand to harness their aerobatic creativity. These programs are in some respects a bridge between formal competition and airshow performances, much more like the latter than the former, and a nod to the tradition of competition producing skillful performers.

Scores are based in part on the overall balance of the sequence, avoidance of repetition, and what many Americans might (unofficially) refer to as the “wow factor.”  Music and smoke, prohibited during the rest of the competition, are allowed in the freestyle. Twelve freestyle gold medals have been awarded since Patrick Paris of France won the first in 1988, and Holland owns three of them. Heuer theorizes that Holland’s dominance may reflect an essential element of the American character, a collective persona rooted in innovation, freedom, and creative expression.

“It’s just wide open,” Heuer said. “He can do anything he wants in the (aerobatic) box.”

Holland finished nearly 277 points ahead of Martin Sonka, a Red Bull Air Race pilot from the Czech Republic, and just under 291 points ahead of Castor Fantoba of Spain, who earned the overall individual bronze.

The top-scoring French freestyle pilot, Mikaël Brageot, was nearly 394 points behind Holland; there were no Russians participating in the event. In that respect also, it was the opposite of the rest of the competition, with the French team dominating. Alexandre Orlowski won the Aresti Cup with the top overall score of 11,031.8730 points after three flights; the French team secured five of the top 10 places, including a sixth-place finish by Aude Lemordant, who was first among the women. Mikhail Mamistov took second place overall for Russia, with 10,996.2287 points after three flights. (Points are calculated by multiplying judge’s scores by the difficulty factor, or K value, of each figure in every flight, then adjusted through a statistical system designed to reduce subjective bias.)

Only one American pilot, Jeff Boerboon, cracked the top 10 overall, 468 points behind Orlowski.

The U.S. team had much higher expectations going in, having held four training camps under the tutelage of Claude “Coco” Bessiere, the 1990 world champion and coach of France’s national teams for more than two decades, a period during which the French pilots won several world and European titles. Bessiere is considered by many the best coach the U.S. team could have landed. Yet after the first flight, the known (or compulsory) program, the Americans were far behind.

“We couldn’t have been more shocked,” Heuer said of the results. 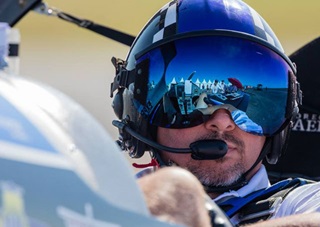 France went on to capture its seventh team title, a gold medal based on the combined scores of the top three pilots from each team. Russia finished second, but has won more championships than any other country if one includes titles earned by the former Soviet Union in 1966, 1970, 1982, and 1986. The world competition is held every two years, and Russia and France have won every team title since the last U.S. team victory in 1988. That was supposed to change in 2015.

The 2013 World Aerobatic Championships in Texas saw the U.S. team finish second, breaking a long string of one-two lockouts by Russia and France. Buoyed by that success, and hungry for a return to the top of the podium for the first time since 1988, the U.S. Unlimited Aerobatic Team devoted countless hours—and dollars—to this year’s attempt.

“We’re going to do a top to bottom review this winter,” Heuer said. “By the time you total all this up … you’re probably looking at half a million dollars that all of the pilots paid out to get over there and get ready. That doesn’t even include the previous 10 years” of practice and competition required, at a minimum, for each pilot to hone the skills needed for international competition.

The 2015 World Champion, on the other hand, enjoyed support that American pilots could only dream of. Orlowski is a French Air Force officer whose full-time job, Heuer said, is to fly an Extra 330SC owned by the French government, coached by another French government employee. The American pilots, in contrast, pay their own way. Some, like Holland and Boerboon, tour the airshow circuit, drawing sponsorships, though team captain Goody Thomas and others do not, and fly airplanes unadorned with  advertising.

“Imagine that sort of support, where you wake up in the morning and you don’t have to worry about going down to the office and working,” Heuer said. “Your job is to prepare for the next championships.” 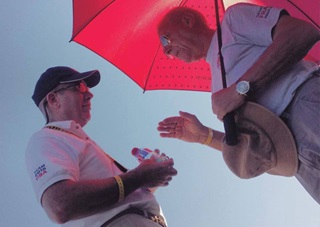 Fundraising by the U.S. team did cover part of the cost of Bessiere’s services, though the individual pilots were on the hook for most of the cost, from the entry fee (about $2,250, at current exchange rates) to the cost of shipping their aircraft in containers to Europe.

Heuer said decisions will need to be made on whether to continue to attempt what has become an almost quixotic quest for international gold.

“Sometimes you gotta reevaluate and look at whether or not the amount of money we pump into this thing is worth it,” Heuer said, adding that the process could lead to an exit from international competition, “maybe pull into our own shores” in favor of regional and national contests.

“Would throwing more money at it solve it? I’m not so sure,” Heuer said. He is confident that the best possible U.S. team was on the airfield, and expects most if not all of the pilots will be inclined to try again in 2017.

“I’ve got a feeling they’ll be ready to go again in a couple of years,” Heuer said.

Heuer noted that none of the American pilots complained about the judging at the contest, in keeping with the sport’s tradition of sportsmanship. Heuer himself was not present for the flights, though he has had conversations with those who were, and said it is less than clear why the overall results did not match the perceptions of some U.S. supporters. Heuer, who has himself been deeply involved in international competition and scoring since the 1980s, said there are no obvious answers.

“It’s hard to put your finger on anything you see on the score sheets,” Heuer said, before coming as close as anyone might in this sport to raising a question of fairness: “To say that the judging line is completely free of politics is not a statement I would make.”

Eric Lentz-Gauthier, an international competition aerobatic glider pilot who also competes in powered aircraft and was a spectator at the World Aerobatic Championships, said he saw no sign of unfair scoring in the flights he was able to observe.

“Generally the flights that looked strong to me received high scores, and the mediocre flights received mediocre scores,” Lentz-Gauthier wrote in an email. &dquo;There were a lot of cases of simple elements that were missed, causing otherwise strong flights to fall in the standings.”

Lentz-Gauthier said that judging an aerobatic flight is much like judging a boxing match, and subjective in its essence. Mistakes may be made on the judging line as well as in the air, but “better to get the flying up to a standard that makes it unmistakably good.”

“That’s pretty good for an American [who’s] over there all by himself,” said International Aerobatic Club President Mike Heuer. “I thought he did really well.”

“It's actually quite a bit cheaper to participate in the [World Glider Aerobatic Championships] than in the powered contest. Shipping airplanes across the ocean is a huge expense,” Lentz-Gauthier wrote.

The small number of gliders capable of flying top-level aerobatics presents a real challenge when grooming Americans for international competition.

“Equipment is the biggest limiting factor,” Heuer said. “It’s the reason we don’t have more of it over here.”

Lentz-Gauthier plans to compete in the U.S. National Aerobatic Championships later this month before heading to the United Arab Emirates to represent his country in the 2015 FAI World Air Games in December. Lentz-Gauthier was selected for that honor in March.