Seattle seaplane pilot Anna Gullickson has a soft spot for animals of any kind. However, it was wild orcas, the black-and-white killer whales that she spotted from her flights over the San Juan Islands, that triggered an idea to paint their image onto a working seaplane plying the skies above the whales’ natural habitat. 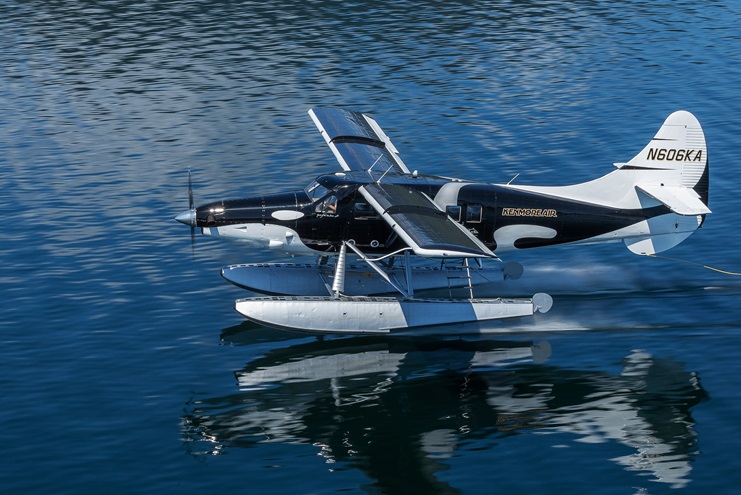 Kenmore Air Harbor's 'Wild Orca' turbine Otter wears an eye-catching black and white paint scheme that seaplane pilots Anna Gullickson and Michael Hays hope can raise awareness for the often misunderstood killer whale. Photo courtesy Chris Teren/WildOrca.org.
After viewing the movie Blackfish, a documentary about a performing killer whale, the commercial pilot felt she had to do something. “It kind of tugged at my heart and I couldn’t stop thinking about it,” Gullickson told AOPA. “I literally cried all the way through it.”

The animal lover was so upset about the plight of the caged whales that she and fellow Kenmore Air Harbor pilot Michael Hays hatched a plan that resulted in the Wild Orca aircraft to help raise awareness for the misunderstood mammal. 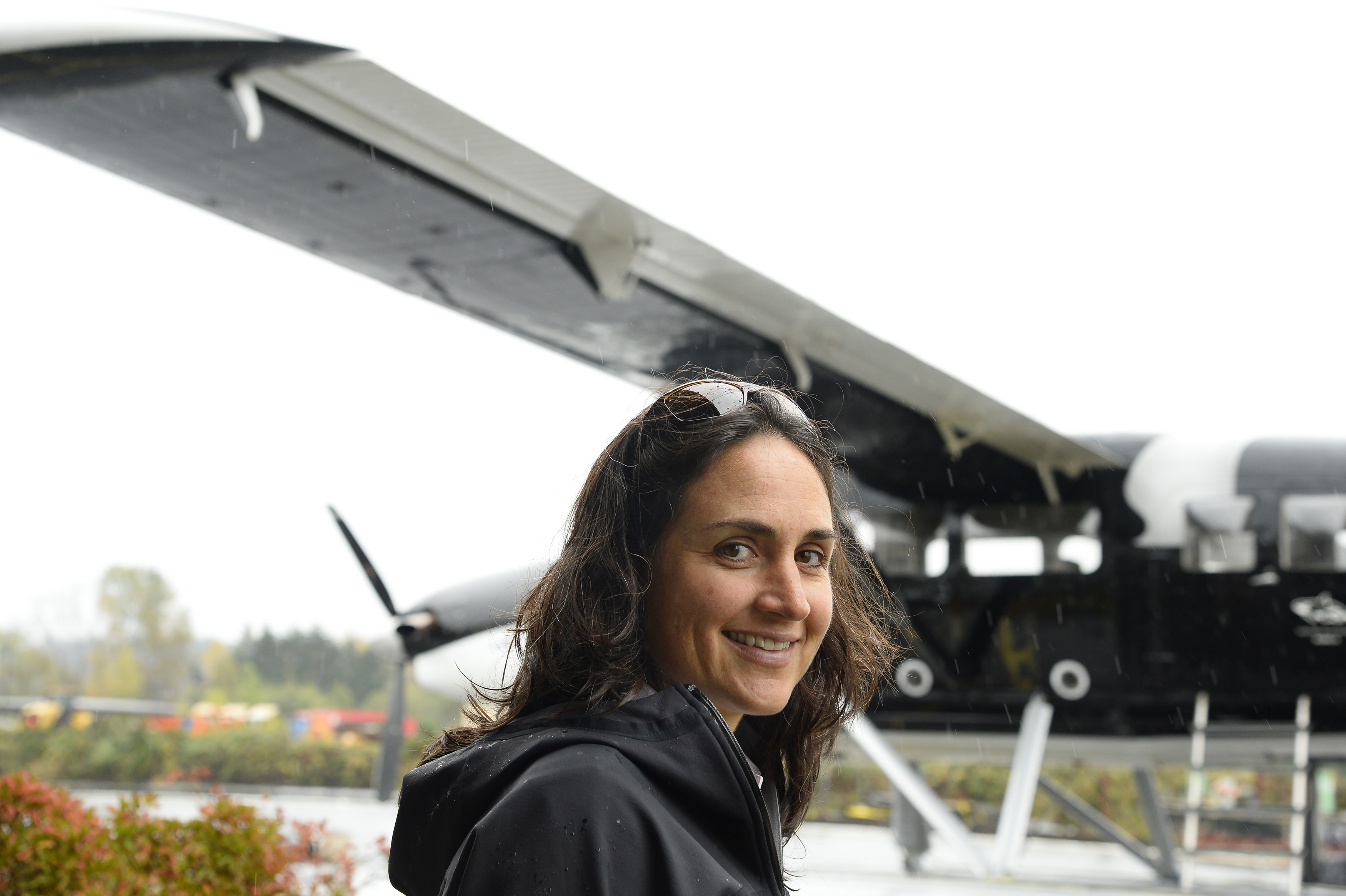 After completing their daily shifts flying passengers from Washington’s Puget Sound to Orcas Island or farther north into Canada’s Strait of Georgia, the two chatted about ways to heighten awareness for the killer whale.

The young pilots introduced a charity run event to raise money for the creature many recognize from its trained acts at sea parks. They established a nonprofit and hoped that donations could help the graceful sea animals. The fun run generated funds, but “runs don’t make much money,” said Gullickson.

Next up was a concert with the local bluegrass band Polecat, a Seattle staple with a large following. The concert was a big success and raised money for whale research while lifting expectations for the two floatplane pilots.

That event opened the door to relationships with scientists including notable zoologist Ken Balcomb, founder of the Center for Whale Research. When another researcher called “asking if there was anything she could do” to help spread the word, the nonprofit organization WildOrca.org was off and running.

With a few thousand dollars in the till, Gullickson leaned on Hays’ design skills to craft a black-and-white logo, stickers, T-shirts, and a website for their fledgling nonprofit and set their sights on something bigger. 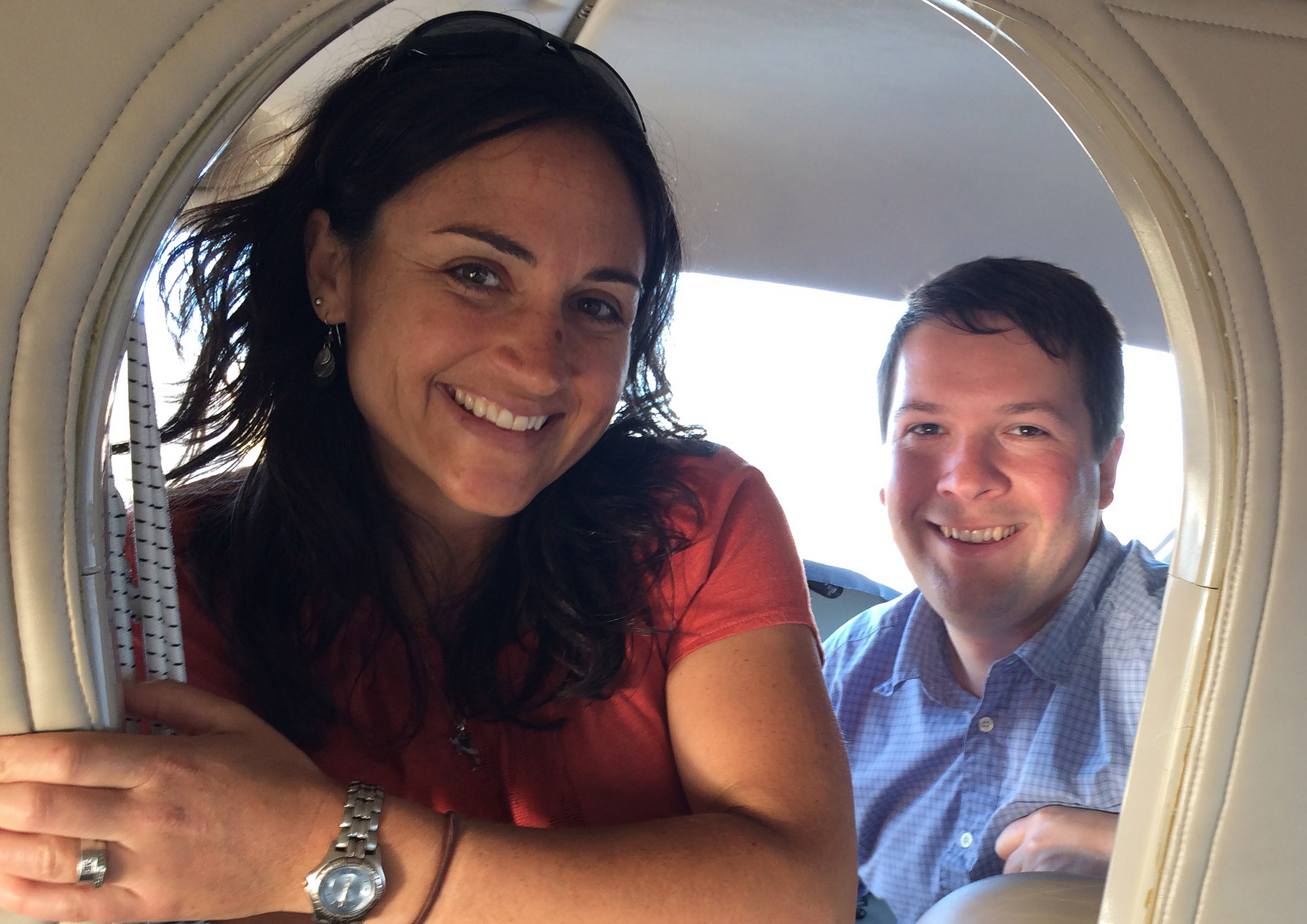 They figured spreading awareness from the sky would be a unique way to send a message of conservation and protection, so they approached their employer about painting one of the de Havillands to resemble a wild orca. “Michael hand-drew the whole paint scheme on his computer,” said Gullickson, “and he hand-drew the logo too.”

Hays scaled up his drawings to the size of a tall-tailed, long-nosed 1954 turbine-powered Otter and added black wings and an alternating white-and-black belly. Soon, the company founded in 1946 and long known for its yellow-and-white aircraft, agreed to collaborate on the distinctive new paint job.

“Between maintenance and management, Kenmore liked it and basically let us do what we wanted,” said Gullickson. The majority of the color scheme was applied by SunQuest Air Specialties at nearby Paine Field while Kenmore technicians painted the flight surfaces.

A welcome party with refreshments, special guests, and the news media greeted the newly painted aircraft when it was unveiled in 2015. Students from a local orphanage giggled with delight during scenic flights around Seattle on the Wild Orca aircraft courtesy of Kenmore Air Harbor management. 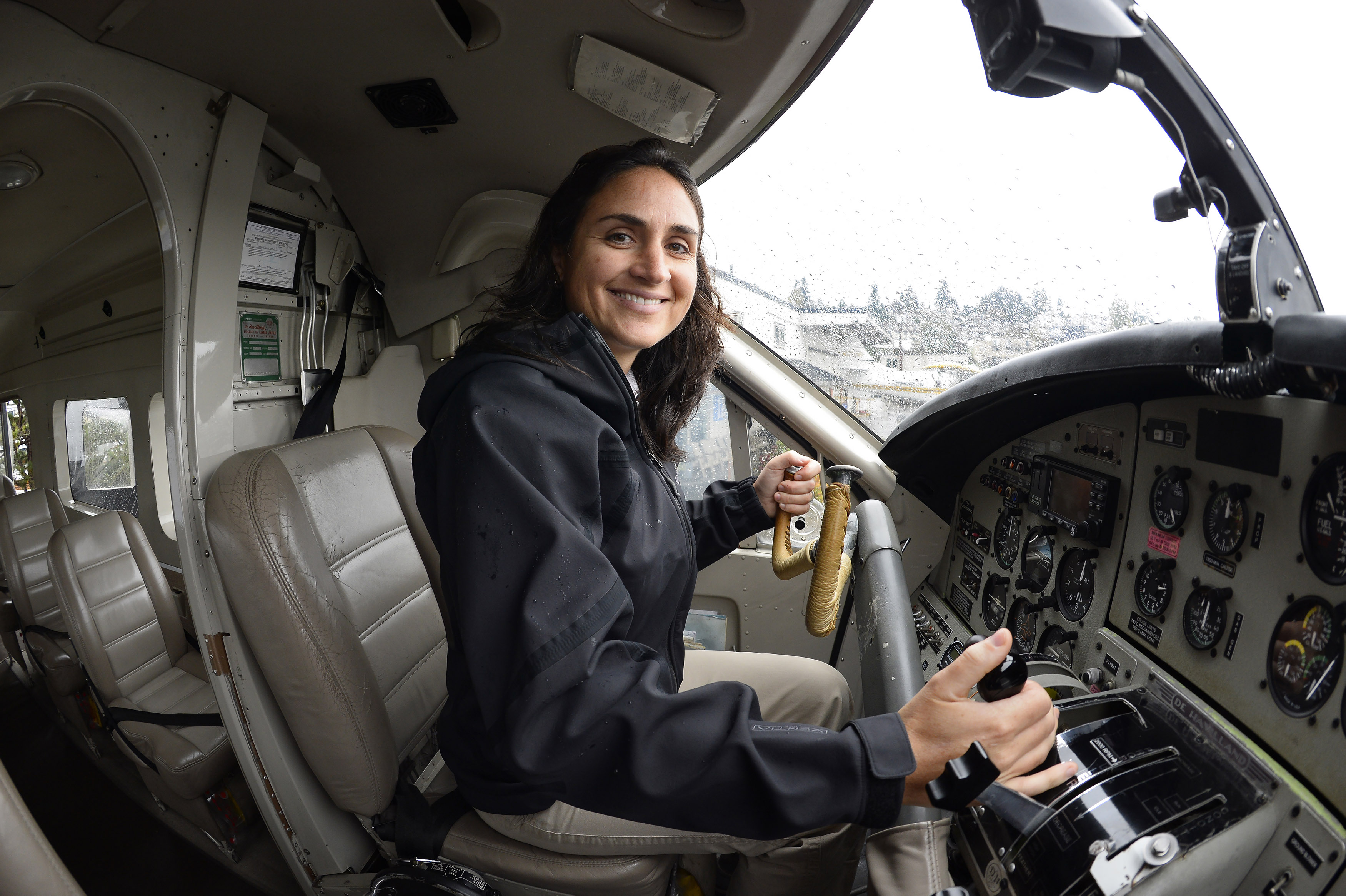 The contrasting design with its swoopy tail and spotted fuselage is a real attention-getter, said Gullickson, who aspired to be a pilot ever since she watched Top Gun.

An estimated 10,000 passengers annually fly inside the 10-seat aircraft, and many more view the graceful Wild Orca from below as the Otter performs its daily flights into and out of Seattle’s busy Lake Union and Lake Washington seaplane bases.

Brochures describing how to protect pods of the Southern Resident Killer Whales are stashed in the aircraft seat pockets. Gullickson said that “buying local and buying organic” helps keep harmful chemicals from the orca’s habitat and away from salmon, their favorite prey. The organization is a proponent of keeping salmon supplies healthy, too.

“People love the Wild Orca airplane,” she said. “We hear people all the time say, ‘We were out in Seattle and we saw the whale fly over.’ It’s a big hit, it’s fun, and you can really tell what it is, flying through the sky,” Gullickson said. “I think it’s done its job.” 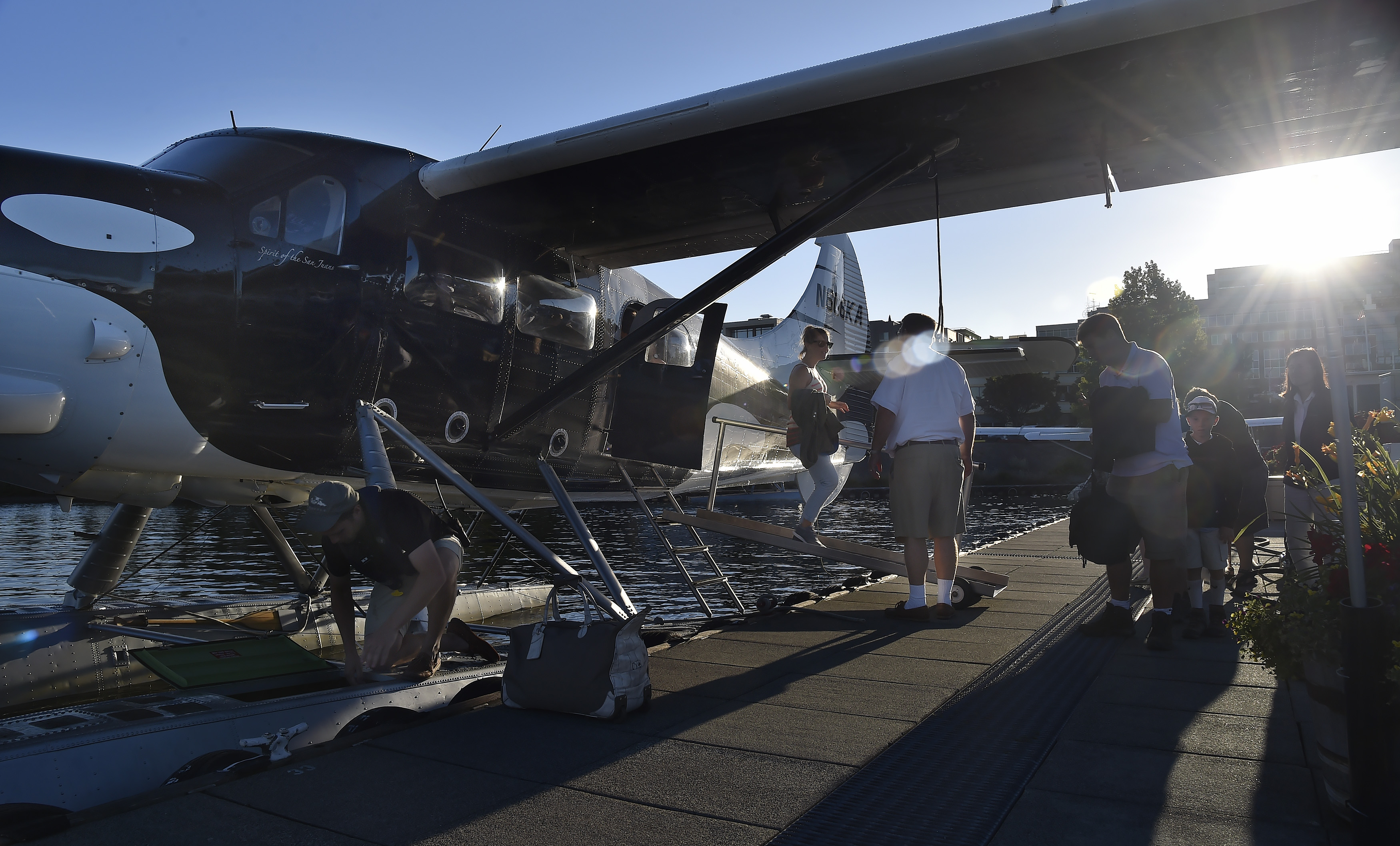