Get the app Get the app
Already a member? Please login below for an enhanced experience. Not a member? Join today
We will be performing maintenance on our systems Sunday 9/19 from 12am to 6am ET. During this time, you may experience intermittent service outages. We appreciate your patience.
News & Media New rulemaking for small drones

Currently, operators authorized for commercial operation through exemptions issued pursuant to Section 333 of the 2012 FAA Modernization and Reform Act are generally not allowed to approach closer than 500 feet from people (other than flight crew members) unless those people are protected by a physical barrier; exceptions to that may be authorized on a case-by-case basis, with additional requirements imposed on operators, who must seek permission for specific operations and establish procedures (such as a closed set) and protective measures. The Micro UAS Aviation Rulemaking Committee will study and develop recommendations for performance-based standards that would allow small UAS (the committee may recommend a different weight limit than the 4.4 pounds originally stipulated in the draft regulations for commercial unmanned operations) to make much closer approaches. Manufacturers would have to demonstrate that particular unmanned aircraft meet performance-based safety standards such as frangible construction that allows the drone to bend or break easily, reducing the risk of injury in case of contact with a person (or an object).

The FAA proposed new regulations in 2015 to govern unmanned aircraft operations that included the creation of a “micro” classification of UAS for systems weighing 4.4 pounds or less. After studying the thousands of comments submitted, the FAA opted not to include that classification in the final rule, which is expected to be released later this year, but instead to create a separate regulation.

“Based on the comments about a ‘micro’ classification submitted as part of the small UAS proposed rule, the FAA will pursue a flexible, performance-based regulatory framework that addresses potential hazards instead of a classification defined primarily by weight and speed,” FAA Administrator Michael Huerta said in a news release.

AOPA supports the safe integration of unmanned aircraft in the National Airspace System, and notes that UAS are an important segment of the aviation industry. The FAA has already authorized more than 3,500 operators to conduct commercial UAS operations through the exemption process, and the industry is expected to grow rapidly, employing more than 100,000 people and generating billions in economic activity within the decade, according to many estimates. Small, unmanned aircraft by necessity carry small cameras, and the 500-foot separation requirement precludes many filming operations that would otherwise increase the utility of these systems.

U.S. Secretary of Transportation Anthony Foxx said the agency “continues to be bullish on new technology... We recognize the significant industry interest in expanding commercial access to the National Airspace System. The short deadline [of the new rulemaking committee] reinforces our commitment to a flexible regulatory approach that can accommodate innovation while maintaining today’s high levels of safety.”

The rulemaking effort was announced a week after the FAA reported a collaboration with the Department of Homeland Security and CACI International Inc., a Virginia technology firm, that is developing an airport-based drone detection system that would triangulate the location of unauthorized unmanned aircraft flown too close to an airport, along with locating the operator.

CACI has developed a proof-of-concept system called Sky Tracker that uses radio frequency detectors at strategic locations, and was tested at Atlantic City International Airport, where Sky Tracker successfully identified and tracked unmanned aircraft systems and their operators during controlled trials between Jan. 25 and Feb. 2. That is not the only system that functions in a similar way: Airbus has developed a system that also can take control of “rogue” UAS. 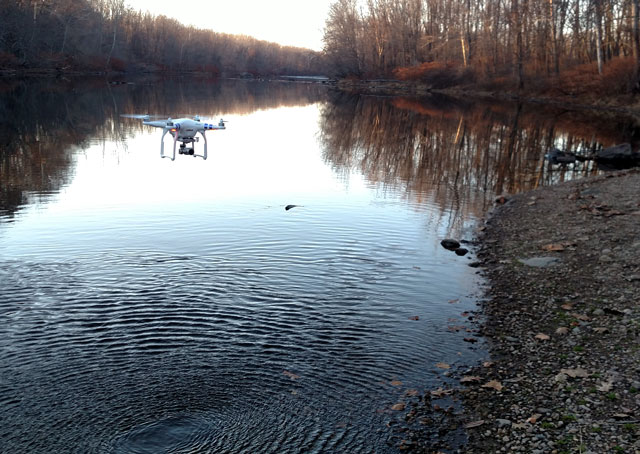