Get the app Get the app
Already a member? Please login below for an enhanced experience. Not a member? Join today
News & Videos Avidyne leverages connections

Avidyne Corp. decided years ago to build wireless connectivity into its navigation and communication units, and the benefits of that decision are becoming more apparent. One display at the company’s booth at EAA AirVenture includes an instrument panel with an Apple iPad mounted on top of the six-pack, the tablet displaying (among other options) a glass cockpit version of the primary instruments. 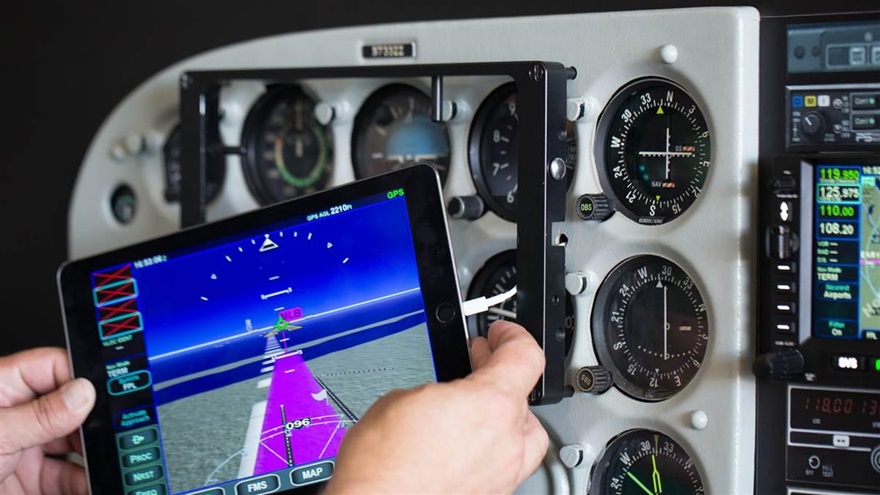 That, said CEO Dan Schwinn, is made possible by the new IFD100 app for the Apple iPad that turns the tablet into an extension of an Avidyne flight management and navigation system. Data from any of Avidyne’s six IFD-series units can be displayed on the tablet, and it is not, Schwinn said, a simple video feed, but a parallel version of the IFD software running on the tablet. Avidyne used a flyPad mount to secure the iPad in place.

“The (IFD) 550 will take an air data input if you have an air data computer,” Schwinn said, and even without that an iPad running the Avidyne app can still offer the functionality and display of the panel-mounted Avidyne product.

The IFD 550 is Avidyne’s new top-of-the-line flight management system and navigator, and retails for $21,000. Schwinn expects it will be certified in “the next couple of months,” and, combined with one or even two iPads, will offer “big glass for the rest of us.”

Schwinn said Avidyne also has released software upgrades for the Entegra R9 Integrated Flight Deck, and EX-Series multifunction displays that will facilitate implementation of Automatic Dependent Surveillance-Broadcast (ADS-B) solutions; the company also touted a growing list of third-party applications including ForeFlight and several others that can integrate with the Avidyne avionics. The company released a software development kit in 2015, aiming to make its IFD series units the central hub of a connected cockpit.

“All the major names are supporting it at this point,” Schwinn said.

For those looking to upgrade to ADS-B who do not want to wait for the $500 federal rebate incentive announced in June, Avidyne is offering a “don’t wait rebate” of $500 that customers can choose in lieu of the federal program, prior to Sept. 30.

Coming next year, Avidyne will offer systems to connect a general aviation cockpit to the GlobalStar satellite network, enabling voice and data communications to and from an aircraft in flight.

“We want to have a GA product that’s in the thousands of dollars and a pound or two within the first half of next year,” Schwinn said of the satellite connection, noting the company plans to release several models with a range of capabilities and price points.

"Connectivity is a big theme at Avidyne," Schwinn said.