Get the app Get the app
Already a member? Please login below for an enhanced experience. Not a member? Join today
News & Media Spin doctor crushes record 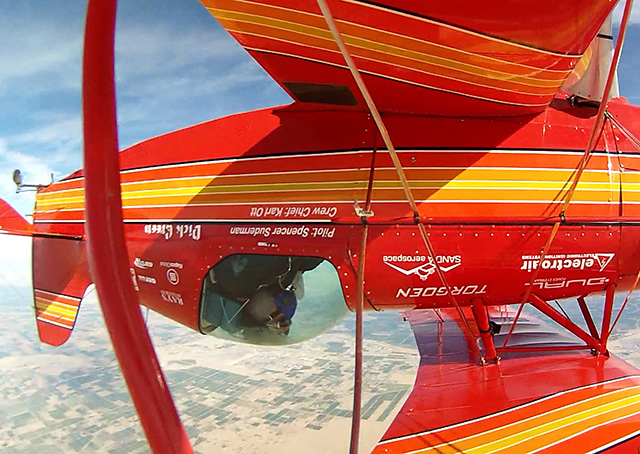 Safely back on the ramp after performing 98 consecutive inverted flat spins in a modified baby biplane, Spencer Suderman popped open the Sunbird S-1x's canopy, leaned back to smile at the Arizona sky above him, and shouted, “That was freaking gnarly, that’s all I can say.”

The airshow performer actually said a few more things in the excitement of the moment after landing at Yuma International Airport in Yuma, Arizona, March 20 but we can’t print them.

He broke his own 81-turn inverted record certified in 2014 by the Guinness Book of World Records, and Suderman figures this one is here to stay. He said technology isn’t yet advanced enough to lift a pilot and airplane to the altitude needed to kick the plane over and spin more than a hundred times.

A Lycoming IO-540 engine that formerly called a Cherokee Six its home pulled the Dan Rihn-designed short fuselage experimental variant of the Pitts S-1 into the flight levels. 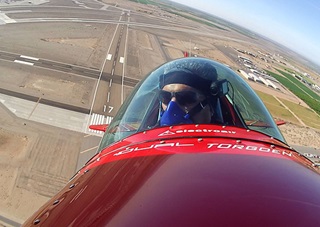 “This airplane is a one of a kind,” he told AOPA.

Suderman, an IT specialist for a well-known entertainment firm, was going for 100 consecutive spins with a two-percent margin of error factored in. The total fit the algorithms he computed for the descent.

He had special clearance from Marine Corps Air Station Yuma. Suderman is a familiar figure on the Western airshow circuit and “the short answer is I just asked if I could do it.” Suderman began the dizzying attempt in a restricted area at 24,500 feet msl over the Barry M. Goldwater Air Force Range near Arizona’s Sauceda Mountains.

With the desert and a hard deck of 2,000 feet agl approaching, the upside-down descent took just under 3 minutes and handily bested Suderman’s earlier mark.

The keys to his success were shortening the distance between the aircraft’s two main centers of gravity for quicker spins and dumping as much weight as possible so the aircraft could climb higher.

Suderman conferred with high-altitude specialist Bruce Bohannon to squeeze more energy from the powerplant and boost his aircraft’s height above the ground. Keeping the weight down was absolutely critical, Suderman said. The stock 260-horsepower engine bolted to a 980-pound airplane was about 240 pounds lighter than his Pitts S-2B aerobatic model. “You take a big engine, stick it on a tiny airplane, and it’s gonna go high.” 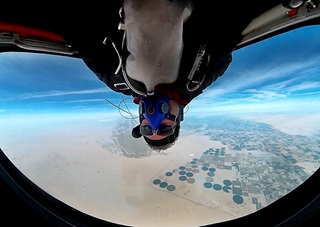 Suderman said the aircraft was extremely mushy before he entered the spin. “You’ve got to get a good entry and that’s where the vortex generators came in.” He stuck VGs on the elevator and vertical stabilizer to help with rudder effectiveness at altitude.

Suderman made a couple of earlier attempts at the new record only to find that G-forces were debilitating to him in the pilot seat. “The rate it spins is so fast I was straining to keep my head up. After 30-seconds or so you feel like your head is going to blow up.”

He devised a low-tech solution by gluing a set of yoga blocks from Walmart to the side of a racecar seat’s headrest, similar to NASCAR’s required HANS safety devices that cradle driver’s heads and necks.

Suderman trained his body for the attempt by bicycling, which strengthened his legs for holding right rudder. Pushups and curls prepped his arms to maintain outside stick leverage. He performs a similar conditioning regimen for the airshow season and added in “a lot of G-training in the Pitts since the first of the year” to fill out his prep work.

He hasn’t ruled out another attempt although it’s unlikely the 49-year-old will top what he said was his fiftieth birthday present to himself (he will be 50 in August).

Responding to why he attempted the record, which was reviewed by Guinness officials and filed March 23, Suderman said he never felt totally fulfilled beating the previous mark by only a few turns.

“I needed to find a way to crush it and then I’d be satisfied,” Suderman said. “I wanted to set the bar so high that nobody would ever catch it.” 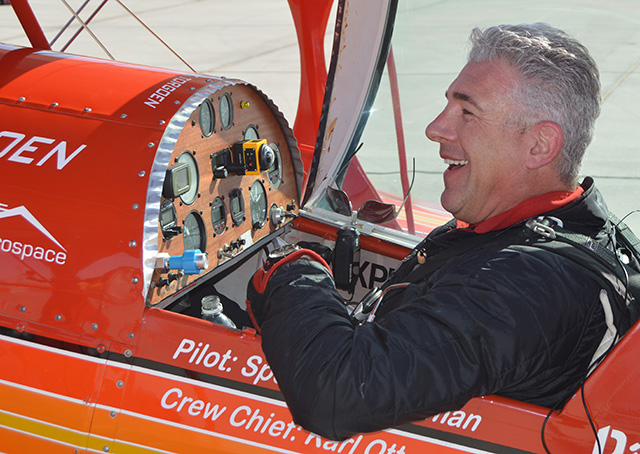