Get the app Get the app
Get the latest news on coronavirus impacts on general aviation, including what AOPA is doing to protect GA, event cancellations, advice for pilots to protect themselves, and more. Read More
Already a member? Please login below for an enhanced experience. Not a member? Join today
News & Videos One less full time job

When Southwest Airlines flight 3060 from Harlingen to Houston, Texas, landed at Houston’s William P. Hobby Airport on May 5, the arrival was anything but routine as the aircraft taxied in to a water salute from the fire hoses of the Houston Fire Department’s airport station, and photographers snapped pictures from a helicopter hovering nearby.

The Boeing 737’s passengers knew something was up too. Many had booked the flight expressly to participate in celebrating one individual’s extraordinary aviation achievements.

The VIP herself was not among those seated in the cabin. Until the aircraft taxied to the gate and shut down, Senior Captain Deborah Rihn-Harvey was occupied with cockpit duties concluding her final flight before retiring after 27 years as a Southwest Airlines pilot. Sitting alongside for the final flight was her stepdaughter, Chris Dale, another Southwest captain, flying as first officer for the occasion. The Eurocopter 135 helicopter recording the proceedings was piloted by Dianna Stanger, a member of the AOPA Board of Visitors, a champion air race pilot, and FBO operator from Port Lavaca, Texas.

Apologies to Southwest and the airline-flying public, but let’s just come out and say that the Part 121 world’s loss is general aviation’s gain. That’s because for Rihn-Harvey—instructor, mentor, hall of famer, three-time national aerobatics champion, airshow performer, designated pilot examiner, and soon, airport and airplane restorer—a full menu of projects awaits in the GA world, where her life as a pilot began.

“It’s one less full-time job. By not having to leave town all the time, maybe I can do some of my other jobs better,” she said in a recent wide-ranging phone interview.

The home base for her long list of post-airline plans will remain Houston’s La Porte Municipal Airport, where her FBO and flight school, Harvey and Rihn Aviation, is located.

Harvey and Rihn's aerobatic school attracts trainees from all corners of the globe—drawn by the opportunity to learn to standards set by a pilot who has frequently held the top ranking of women aerobatic competitors, and is a 2003 inductee of the Texas Aviation Hall of Fame and a 2007 inductee to the EAA Sport Aviation Hall of Fame, among many other honors and titles. 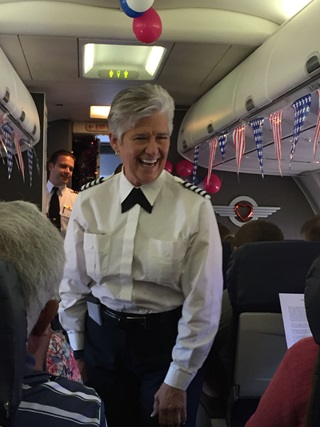 Now Rihn-Harvey will turn to that list of projects designed to build aviation’s future and honor her family’s aviation past.

Building the future at the home airport includes “making it fun” for new people coming into aviation, which has the goal of an effort underway for a few years to welcome newcomers and recover lapsed pilots in a flying club environment that provides social activities and reasons to fly.

Clubs and organizations provide a spark of enthusiasm and give their members a sense of ownership difficult to achieve by renting an aircraft at an FBO—and you can see that idea taking hold across the country, she said, adding, “Aviation would be a lot worse off without all that right now.”

Look at the number of Van’s Aircraft RVs flying, and all the other experimental airplanes. Without aviation’s social structures, “We wouldn’t have that activity,” she said.

Anyone with a love of teaching and a wealth of experience to share, and the passion to share it, is a natural mentor, and for Rihn-Harvey, mentoring has long been a serious commitment that has earned her respect and appreciation from many.

Her mentoring is most prominently at work for EAA’s Women Soar You Soar program, which introduces girls in grades nine through 12 to opportunities available in aviation and aerospace through workshops, career exploration, and other activities during EAA AirVenture in Oshkosh, Wisconsin, which will take place July 24 through 27 this year.

Women Soar You Soar can be a life-changing experience for participants. “We’ve had girls come to that camp and tell us, ‘Everyone thinks it’s silly that I want to be a pilot,” Rihn-Harvey said.

Then those girls meet Rihn-Harvey, see her passion, hear her story—and watch her fly as she climbs into her Cap 232 aerobatic performance airplane and flies them a show, as she will do again this year.

The campers hear a message about believing in themselves and realizing that “if you have a dream, a desire, you can go for it.“

“You might have to prove that’s really your passion. You have to be dedicated, you have to be determined. You will find somebody that won’t give it to you but will help you get there,” she tells the campers, noting, “I didn’t get where I was without somebody opening a door.”

The campers learn about tools for researching schools and scholarships—thousands of which go unsought each year, she says—and for discovering what jobs could make the aviation dream a reality.

“Mostly it is to empower them to know that they can do whatever they want to do,” she said.

Cindy Hasselbring, senior director for AOPA’s High School Aviation Initiative, also has been a mentor for Women Soar You Soar, and has become close friends with Rihn-Harvey during their collaboration. She notes the affection shown Rihn-Harvey by the members of aviation’s family who stop by to greet her at Oshkosh.

“So many people come up to her and share they were grateful for her doing this or that. It always impresses me,” said Hasselbring, who flew aboard Rihn-Harvey’s final flight as captain.

Another colleague and friend is Yasmina Platt, AOPA’s Central Southwest regional manager, who nominated Rihn-Harvey for one of her many honors: induction into the Aviation Hall of Fame of her native state, Nebraska. Rihn-Harvey joined her celebrated grandfather, 1991 inductee Roy Furstenberg, an airline pioneer and designer of the Overland Sport airplane, as a hall of famer.

Rihn-Harvey’s supporters didn’t stop with submitting a nomination form, Platt said. An informal “delegation” from Houston flew up to Kearney, Nebraska, for the January 2016 induction held during the Nebraska Aviation Symposium.

“Several of her friends and family members from across Nebraska also attended. She was beyond herself,” Platt said.

Rihn-Harvey represents a third generation of pilots in her family, and was taught to fly by her father, Jack Furstenberg, at North Omaha Airport, a privately owned, public-use grass strip in Omaha.

The plan, she said, was for aviation to be a hobby to enjoy while she pursued another passion, medicine, as a career.

Her two older brothers “were line guys” at North Omaha. Every school vacation and every summer, she built flight time and pursued additional ratings and rode along on repositioning flights and charters—a familiar rite of passage for pilots coming along in GA.

“We’d go to the airport every weekend. They had an Aeronca Champ. It was an airport that was fun,” she recalled.

She never felt out of place as a female member of the airport community. There was a café at the airport, and there was always a bottle of soda pop in the cooler for her. But when the place was sold, activity eventually dwindled, and some of the land was sold off, which closed a crossing runway. 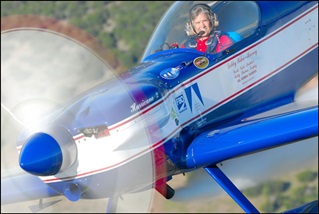 Rihn-Harvey and her brothers weren’t about to let that decline continue. She bought a plot of land “right on the main ramp,” which has three hangars and an apartment above one. One hangar has been leased; a brother will maintain aircraft in another.

People passionate about the airport are working to fix up the old facilities. An aero club is in formation. Rihn-Harvey is advocating for renaming the airport Veterans Field to honor the many former service members among the airport community. When a “big fly-in” with a veterans’ appreciation theme was held last June, she flew an informal show.

“That’s where we are going to move the family project,” she said, referring to another item on her to-do list: the completion of a flyable replica of the two-place Overland Sport. The aircraft will eventually be donated, perhaps to the airport or a museum.

Finding work at a medical laboratory brought Rihn-Harvey, a biology and medical technology major, to Houston, where for some years she shifted between medical employment and flying freight in multiengine piston airplanes: twin Bonanzas, Beech 18s, and a four-engine de Havilland DH 114 Heron.

There were few opportunities with commuter airlines back then, she said—and being a female pilot in corporate aviation was rare indeed, and remains so, “even to this day.”

After supervising a medical lab for eight years, Rihn-Harvey quit the field for the last time when she met her second husband and opened a one-airplane flight school.

“Thirty-seven years later, here I am,” she said.

Transport flying beckoned in 1978 when a position opened at United Airlines. But furloughs hit before she got to the flight line.

“Five years later they threw our files out and said we’d have to reapply. I never did,” she said.

In 1989, she was hired by Southwest Airlines at a time when she said the company was reaching out to hire women pilots. Now there are more than 250 women flying for the airline out of about 8,500 pilots. At retirement, Rihn-Harvey held number 11 among her female colleagues, and ranked number 219 in seniority overall, having advanced from number 800 as a new hire.

In such a position she has stood as a role model and motivator for female flight attendants with a dream of moving up to the front of the aircraft. She observes, with some gratification, that among male pilots, some who were not entirely in sync with such change have been observed revisiting their thinking when their own daughters reach the age at which they begin to examine career aspirations.

Loquacious about her goals and passions—the word “passion” occurs frequently in her discourse—but always modest about her achievements, Rihn-Harvey relates an anecdote about being mistaken for a flight attendant by a woman sharing a ride in a van. (The woman had no idea that a woman could pilot an airliner.) With a tinge of remorse Rihn-Harvey recalls some ungentle words spoken to correct the woman’s misinformed notion that women don’t fly.

Indeed they fly. One of Rihn-Harvey’s preferred ways to send that message is by making real-time in-cockpit announcements of her airshow performances—a method that on occasion has dispelled the incredulity of spectators “who don’t believe there’s really a female up there.”

Her spiel also has jazzed up the act, as she learned from a compliment she received from a fellow performer, Debbie Gary of Debbie Gary Airshows, after a show.

“When you started talking, and ‘Yeehaw,’ and ‘C’mon baby!’ you just pulled everybody into the act. When you laugh, they are laughing,” she recalled Gary telling her.

“That’s what it’s about: Getting those people involved,” Rihn-Harvey said.